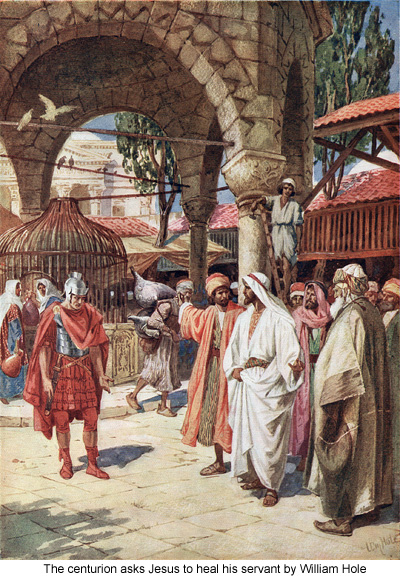 147:1.1 On the day before they made ready to go to Jerusalem for the feast of the Passover, Mangus, a centurion, or captain, of the Roman guard stationed at Capernaum, came to the rulers of the synagogue, saying: "My faithful orderly is sick and at the point of death. Would you, therefore, go to Jesus in my behalf and beseech him to heal my servant?" The Roman captain did this because he thought the Jewish leaders would have more influence with Jesus. So the elders went to see Jesus and their spokesman said: "Teacher, we earnestly request you to go over to Capernaum and save the favorite servant of the Roman centurion, who is worthy of your notice because he loves our nation and even built us the very synagogue wherein you have so many times spoken."

147:1.2 And when Jesus had heard them, he said, "I will go with you." And as he went with them over to the centurion's house, and before they had entered his yard, the Roman soldier sent his friends out to greet Jesus, instructing them to say: "Lord, trouble not yourself to enter my house, for I am not worthy that you should come under my roof. Neither did I think myself worthy to come to you; wherefore I sent the elders of your own people. But I know that you can speak the word where you stand and my servant will be healed. For I am myself under the orders of others, and I have soldiers under me, and I say to this one go, and he goes; to another come, and he comes, and to my servants do this or do that, and they do it."

147:1.3 And when Jesus heard these words, he turned and said to his apostles and those who were with them: "I marvel at the belief of the gentile. Verily, verily, I say to you, I have not found so great faith, no, not in Israel." Jesus, turning from the house, said, "Let us go hence." And the friends of the centurion went into the house and told Mangus what Jesus had said. And from that hour the servant began to mend and was eventually restored to his normal health and usefulness.

147:1.4 But we never knew just what happened on this occasion. This is simply the record, and as to whether or not invisible beings ministered healing to the centurion's servant, was not revealed to those who accompanied Jesus. We only know of the fact of the servant's complete recovery.