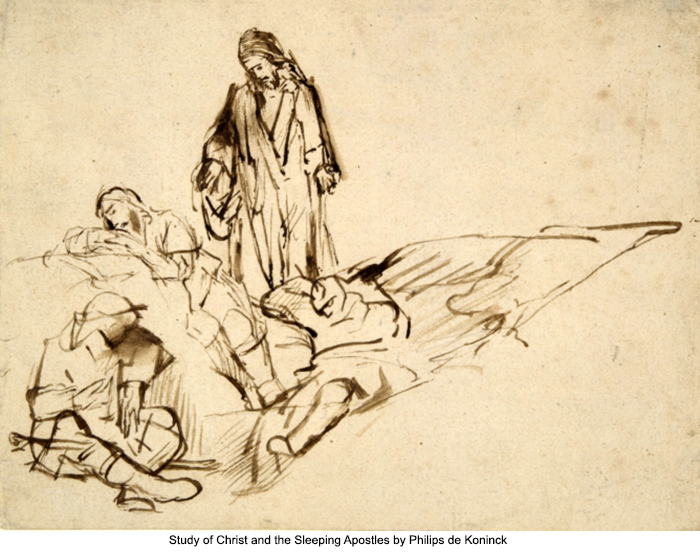 182:3.1 After all was still and quiet about the camp, Jesus, taking Peter, James, and John, went a short way up a near-by ravine where he had often before gone to pray and commune. The three apostles could not help recognizing that he was grievously oppressed; never before had they observed their Master to be so heavy-laden and sorrowful. When they arrived at the place of his devotions, he bade the three sit down and watch with him while he went off about a stone's throw to pray. And when he had fallen down on his face, he prayed: "My Father, I came into this world to do your will, and so have I. I know that the hour has come to lay down this life in the flesh, and I do not shrink therefrom, but I would know that it is your will that I drink this cup. Send me the assurance that I will please you in my death even as I have in my life."

182:3.2 The Master remained in a prayerful attitude for a few moments, and then, going over to the three apostles, he found them sound asleep, for their eyes were heavy and they could not remain awake. As Jesus awoke them, he said: "What! can you not watch with me even for one hour? Cannot you see that my soul is exceedingly sorrowful, even to death, and that I crave your companionship?" After the three had aroused from their slumber, the Master again went apart by himself and, falling down on the ground, again prayed: "Father, I know it is possible to avoid this cup—all things are possible with you—but I have come to do your will, and while this is a bitter cup, I would drink it if it is your will." And when he had thus prayed, a mighty angel came down by his side and, speaking to him, touched him and strengthened him.

182:3.3 When Jesus returned to speak with the three apostles, he again found them fast asleep. He awakened them, saying: "In such an hour I need that you should watch and pray with me—all the more do you need to pray that you enter not into temptation—wherefore do you fall asleep when I leave you?"

182:3.4 And then, for a third time, the Master withdrew and prayed: "Father, you see my sleeping apostles; have mercy upon them. The spirit is indeed willing, but the flesh is weak. And now, O Father, if this cup may not pass, then would I drink it. Not my will, but yours, be done." And when he had finished praying, he lay for a moment prostrate on the ground. When he arose and went back to his apostles, once more he found them asleep. He surveyed them and, with a pitying gesture, tenderly said: "Sleep on now and take your rest; the time of decision is past. The hour is now upon us wherein the Son of Man will be betrayed into the hands of his enemies." As he reached down to shake them that he might awaken them, he said: "Arise, let us be going back to the camp, for, behold, he who betrays me is at hand, and the hour has come when my flock shall be scattered. But I have already told you about these things."