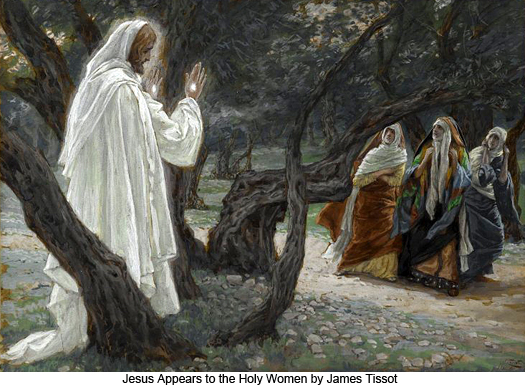 189:4.1 As we approach the time of the resurrection of Jesus on this early Sunday morning, it should be recalled that the ten apostles were sojourning at the home of Elijah and Mary Mark, where they were asleep in the upper chamber, resting on the very couches whereon they reclined during the last supper with their Master. This Sunday morning they were all there assembled except Thomas. Thomas was with them for a few minutes late Saturday night when they first got together, but the sight of the apostles, coupled with the thought of what had happened to Jesus, was too much for him. He looked his associates over and immediately left the room, going to the home of Simon in Bethphage, where he thought to grieve over his troubles in solitude. The apostles all suffered, not so much from doubt and despair as from fear, grief, and shame.

189:4.2 At the home of Nicodemus there were gathered together, with David Zebedee and Joseph of Arimathea, some twelve or fifteen of the more prominent of the Jerusalem disciples of Jesus. At the home of Joseph of Arimathea there were some fifteen or twenty of the leading women believers. Only these women abode in Joseph's house, and they had kept close within during the hours of the Sabbath day and the evening after the Sabbath, so that they were ignorant of the military guard on watch at the tomb; neither did they know that a second stone had been rolled in front of the tomb, and that both of these stones had been placed under the seal of Pilate.

189:4.3 A little before three o'clock this Sunday morning, when the first signs of day began to appear in the east, five of the women started out for the tomb of Jesus. They had prepared an abundance of special embalming lotions, and they carried many linen bandages with them. It was their purpose more thoroughly to give the body of Jesus its death anointing and more carefully to wrap it up with the new bandages.

189:4.4 The women who went on this mission of anointing Jesus' body were: Mary Magdalene, Mary the mother of the Alpheus twins, Salome the mother of the Zebedee brothers, Joanna the wife of Chuza, and Susanna the daughter of Ezra of Alexandria.

189:4.5 It was about half past three o'clock when the five women, laden with their ointments, arrived before the empty tomb. As they passed out of the Damascus gate, they encountered a number of soldiers fleeing into the city more or less panic-stricken, and this caused them to pause for a few minutes; but when nothing more developed, they resumed their journey.

189:4.6 They were greatly surprised to see the stone rolled away from the entrance to the tomb, inasmuch as they had said among themselves on the way out, "Who will help us roll away the stone?" They set down their burdens and began to look upon one another in fear and with great amazement. While they stood there, atremble with fear, Mary Magdalene ventured around the smaller stone and dared to enter the open sepulchre. This tomb of Joseph was in his garden on the hillside on the eastern side of the road, and it also faced toward the east. By this hour there was just enough of the dawn of a new day to enable Mary to look back to the place where the Master's body had lain and to discern that it was gone. In the recess of stone where they had laid Jesus, Mary saw only the folded napkin where his head had rested and the bandages wherewith he had been wrapped lying intact and as they had rested on the stone before the celestial hosts removed the body. The covering sheet lay at the foot of the burial niche.

189:4.7 After Mary had tarried in the doorway of the tomb for a few moments (she did not see distinctly when she first entered the tomb), she saw that Jesus' body was gone and in its place only these grave cloths, and she uttered a cry of alarm and anguish. All the women were exceedingly nervous; they had been on edge ever since meeting the panicky soldiers at the city gate, and when Mary uttered this scream of anguish, they were terror-stricken and fled in great haste. And they did not stop until they had run all the way to the Damascus gate. By this time Joanna was conscience -stricken that they had deserted Mary; she rallied her companions, and they started back for the tomb.

189:4.8 As they drew near the sepulchre, the frightened Magdalene, who was even more terrorized when she failed to find her sisters waiting when she came out of the tomb, now rushed up to them, excitedly exclaiming: "He is not there—they have taken him away!" And she led them back to the tomb, and they all entered and saw that it was empty.

189:4.9 All five of the women then sat down on the stone near the entrance and talked over the situation. It had not yet occurred to them that Jesus had been resurrected. They had been by themselves over the Sabbath, and they conjectured that the body had been moved to another resting place. But when they pondered such a solution of their dilemma, they were at a loss to account for the orderly arrangement of the grave cloths; how could the body have been removed since the very bandages in which it was wrapped were left in position and apparently intact on the burial shelf? 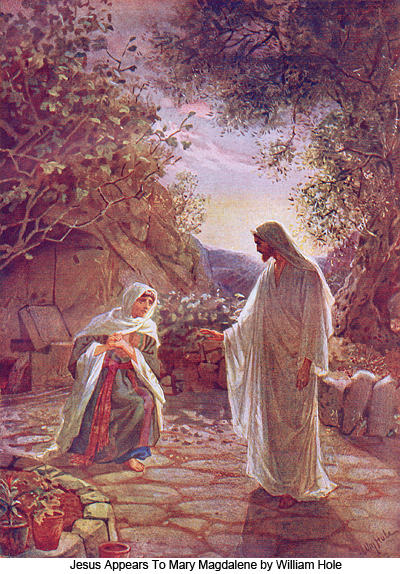 189:4.10 As these women sat there in the early hours of the dawn of this new day, they looked to one side and observed a silent and motionless stranger. For a moment they were again frightened, but Mary Magdalene, rushing toward him and addressing him as if she thought he might be the caretaker of the garden, said, "Where have you taken the Master? Where have they laid him? Tell us that we may go and get him." When the stranger did not answer Mary, she began to weep. Then spoke Jesus to them, saying, "Whom do you seek?" Mary said: "We seek for Jesus who was laid to rest in Joseph's tomb, but he is gone. Do you know where they have taken him?" Then said Jesus: "Did not this Jesus tell you, even in Galilee, that he would die, but that he would rise again?" These words startled the women, but the Master was so changed that they did not yet recognize him with his back turned to the dim light. And as they pondered his words, he addressed the Magdalene with a familiar voice, saying, "Mary." And when she heard that word of well-known sympathy and affectionate greeting, she knew it was the voice of the Master, and she rushed to kneel at his feet while she exclaimed, "My Lord, and my Master!" And all of the other women recognized that it was the Master who stood before them in glorified form, and they quickly knelt before him.

189:4.11 These human eyes were enabled to see the morontia form of Jesus because of the special ministry of the transformers and the midwayers in association with certain of the morontia personalities then accompanying Jesus.

189:4.12 As Mary sought to embrace his feet, Jesus said: "Touch me not, Mary, for I am not as you knew me in the flesh. In this form will I tarry with you for a season before I ascend to the Father. But go, all of you, now and tell my apostles—and Peter—that I have risen, and that you have talked with me."

189:4.13 After these women had recovered from the shock of their amazement, they hastened back to the city and to the home of Elijah Mark, where they related to the ten apostles all that had happened to them; but the apostles were not inclined to believe them. They thought at first that the women had seen a vision, but when Mary Magdalene repeated the words which Jesus had spoken to them, and when Peter heard his name, he rushed out of the upper chamber, followed closely by John, in great haste to reach the tomb and see these things for himself.

189:4.14 The women repeated the story of talking with Jesus to the other apostles, but they would not believe; and they would not go to find out for themselves as had Peter and John.

190:0.5 In viewing the prominent part which Mary Magdalene took in proclaiming the Master's resurrection, it should be recorded that Mary was the chief spokesman for the women's corps, as was Peter for the apostles. Mary was not chief of the women workers, but she was their chief teacher and public spokesman. Mary had become a woman of great circumspection, so that her boldness in speaking to a man whom she considered to be the caretaker of Joseph's garden only indicates how horrified she was to find the tomb empty. It was the depth and agony of her love, the fullness of her devotion, that caused her to forget, for a moment, the conventional restraints of a Jewish woman's approach to a strange man.