Home Jesus Illustrated Stories 5:30am - A Second Meeting Of The Court 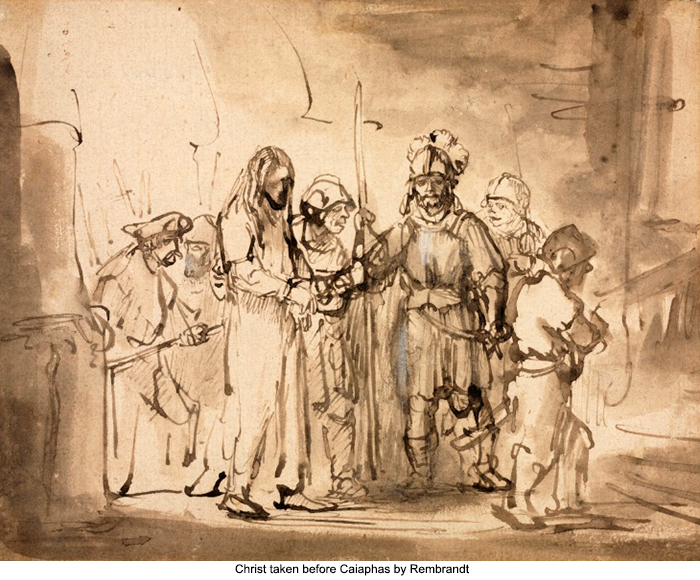 184:5.1 At five-thirty o'clock the court reassembled, and Jesus was led into the adjoining room, where John was waiting. Here the Roman soldier and the temple guards watched over Jesus while the court began the formulation of the charges which were to be presented to Pilate. Annas made it clear to his associates that the charge of blasphemy would carry no weight with Pilate. Judas was present during this second meeting of the court, but he gave no testimony.

184:5.2 This session of the court lasted only a half hour, and when they adjourned to go before Pilate, they had drawn up the indictment of Jesus, as being worthy of death, under three heads:

1985:7 184:5.9 This entire procedure was irregular and wholly contrary to the Jewish laws. No two witnesses had agreed on any matter except those who testified regarding Jesus' statement about destroying the temple and raising it again in three days. And even concerning that point, no witnesses spoke for the defense, and neither was Jesus asked to explain his intended meaning.

184:5.10 The only point the court could have consistently judged him on was that of blasphemy, and that would have rested entirely on his own testimony. Even concerning blasphemy, they failed to cast a formal ballot for the death sentence.

184:5.11 And now they presumed to formulate three charges, with which to go before Pilate, on which no witnesses had been heard, and which were agreed upon while the accused prisoner was absent. When this was done, three of the Pharisees took their leave; they wanted to see Jesus destroyed, but they would not formulate charges against him without witnesses and in his absence.

184:5.9 Jesus did not again appear before the Sanhedrist court. They did not want again to look upon his face as they sat in judgment upon his innocent life. Jesus did not know (as a man) of their formal charges until he heard them recited by Pilate.

184:5.10 While Jesus was in the room with John and the guards, and while the court was in its second session, some of the women about the high priest's palace, together with their friends, came to look upon the strange prisoner, and one of them asked him, "Are you the Messiah, the Son of God?" And Jesus answered: "If I tell you, you will not believe me; and if I ask you, you will not answer. "

184:5.11 At six o'clock that morning Jesus was led forth from the home of Caiaphas to appear before Pilate for confirmation of the sentence of death which this Sanhedrist court had so unjustly and irregularly decreed.

-  Back to Great Jesus Stories -