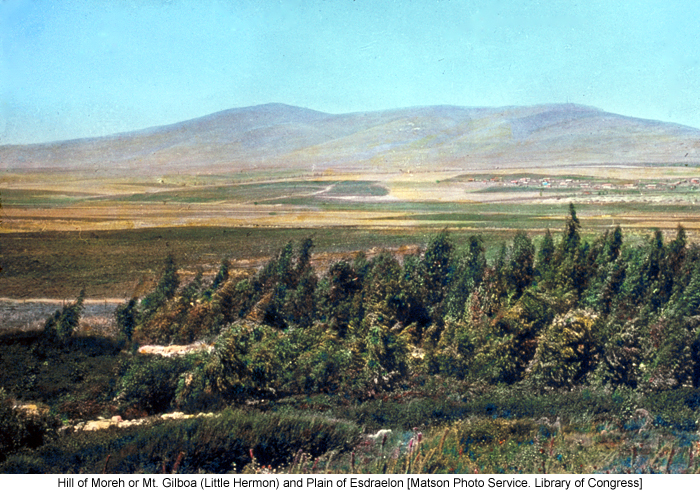 144:6.1 Around the first of October, Philip and some of his fellow apostles were in a near-by village buying food when they met some of the apostles of John the Baptist. As a result of this chance meeting in the market place there came about a three weeks' conference at the Gilboa camp between the apostles of Jesus and the apostles of John, for John had recently appointed twelve of his leaders to be apostles, following the precedent of Jesus. John had done this in response to the urging of Abner, the chief of his loyal supporters. Jesus was present at the Gilboa camp throughout the first week of this joint conference but absented himself the last two weeks.

144:6.2 By the beginning of the second week of this month, Abner had assembled all of his associates at the Gilboa camp and was prepared to go into council with the apostles of Jesus. For three weeks these twenty-four men were in session three times a day and for six days each week. The first week Jesus mingled with them between their forenoon, afternoon, and evening sessions. They wanted the Master to meet with them and preside over their joint deliberations, but he steadfastly refused to participate in their discussions, though he did consent to speak to them on three occasions. These talks by Jesus to the twenty-four were on sympathy, co-operation, and tolerance.

144:6.3 Andrew and Abner alternated in presiding over these joint meetings of the two apostolic groups. These men had many difficulties to discuss and numerous problems to solve. Again and again would they take their troubles to Jesus, only to hear him say: "I am concerned only with your personal and purely religious problems. I am the representative of the Father to the individual, not to the group. If you are in personal difficulty in your relations with God, come to me, and I will hear you and counsel you in the solution of your problem. But when you enter upon the co-ordination of divergent human interpretations of religious questions and upon the socialization of religion, you are destined to solve all such problems by your own decisions. Albeit, I am ever sympathetic and always interested, and when you arrive at your conclusions touching these matters of nonspiritual import, provided you are all agreed, then I pledge in advance my full approval and hearty co-operation. And now, in order to leave you unhampered in your deliberations, I am leaving you for two weeks. Be not anxious about me, for I will return to you. I will be about my Father's business, for we have other realms besides this one."

144:6.4 After thus speaking, Jesus went down the mountainside, and they saw him no more for two full weeks. And they never knew where he went or what he did during these days. It was some time before the twenty-four could settle down to the serious consideration of their problems, they were so disconcerted by the absence of the Master. However, within a week they were again in the heart of their discussions, and they could not go to Jesus for help.

144:6.5 The first item the group agreed upon was the adoption of the prayer which Jesus had so recently taught them. It was unanimously voted to accept this prayer as the one to be taught believers by both groups of apostles.

144:6.6 They next decided that, as long as John lived, whether in prison or out, both groups of twelve apostles would go on with their work, and that joint meetings for one week would be held every three months at places to be agreed upon from time to time.

144:6.7 But the most serious of all their problems was the question of baptism. Their difficulties were all the more aggravated because Jesus had refused to make any pronouncement upon the subject. They finally agreed: As long as John lived, or until they might jointly modify this decision, only the apostles of John would baptize believers, and only the apostles of Jesus would finally instruct the new disciples. Accordingly, from that time until after the death of John, two of the apostles of John accompanied Jesus and his apostles to baptize believers, for the joint council had unanimously voted that baptism was to become the initial step in the outward alliance with the affairs of the kingdom.

144:6.8 It was next agreed, in case of the death of John, that the apostles of John would present themselves to Jesus and become subject to his direction, and that they would baptize no more unless authorized by Jesus or his apostles.

144:6.9 And then was it voted that, in case of John's death, the apostles of Jesus would begin to baptize with water as the emblem of the baptism of the divine Spirit. As to whether or not repentance should be attached to the preaching of baptism was left optional; no decision was made binding upon the group. John's apostles preached, "Repent and be baptized." Jesus' apostles proclaimed, "Believe and be baptized."

144:6.10 And this is the story of the first attempt of Jesus' followers to co-ordinate divergent efforts, compose differences of opinion, organize group undertakings, legislate on outward observances, and socialize personal religious practices.

144:6.11 Many other minor matters were considered and their solutions unanimously agreed upon. These twenty-four men had a truly remarkable experience these two weeks when they were compelled to face problems and compose difficulties without Jesus. They learned to differ, to debate, to contend, to pray, and to compromise, and throughout it all to remain sympathetic with the other person's viewpoint and to maintain at least some degree of tolerance for his honest opinions.

144:6.12 On the afternoon of their final discussion of financial questions, Jesus returned, heard of their deliberations, listened to their decisions, and said: "These, then, are your conclusions, and I shall help you each to carry out the spirit of your united decisions."

144:6.13 Two months and a half from this time John was executed, and throughout this period the apostles of John remained with Jesus and the twelve. They all worked together and baptized believers during this season of labor in the cities of the Decapolis. The Gilboa camp was broken up on November 2, A.D. 27.