The Arrival Of Adam And Eve On Earth 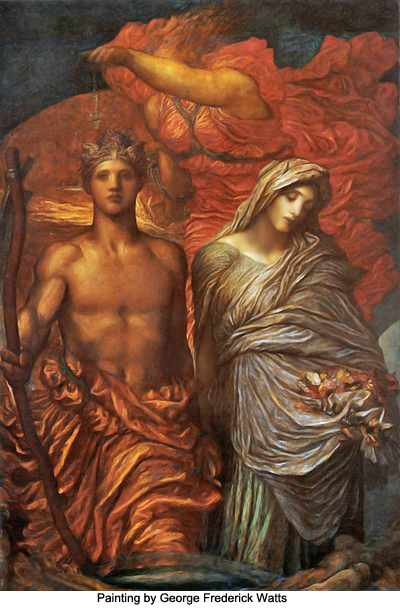 The Urantia Book gives the specific date of Adam and Eve's arrival which differs from the date arrived at by Biblical scholars calculated from the Genesis account. Using the Biblical time line provided by length of life and ancestral lineage many religionists believe the Earth was created and Adam and Eve were placed upon it at approximately 5,000 B.C. The Urantia Book states that the earth attained its approximate present size about one billion years ago and was created when material was drawn off of the sun by the nearby passing of another large star, giving origin to all of the solar system 4.5 billion years ago. It further states that life on Earth began its evolutionary journey 550,000,000 years ago. Human life began approximately one million years ago.

The dematerialized bodies of Adam and Eve arrived at the Garden, from the year 1934, 37,848 years ago. The rematerialization process took ten days and their unconscious slumber continued throughout this period of reconstruction. When the reassembly was completed, they regained consciousness simultaneously, recreated in dual human form for presentation as the world's new rulers. Adam and Eve stood in their new home and on their new world to all intents and purposes just as they were before submitting to the dematerializing process on Jerusem. (Click to read more 74:0.1)

On a normal planet the arrival of the Material Son would ordinarily herald the approach of a great age of invention, material progress, and intellectual enlightenment. The post-Adamic era is the great scientific age of most worlds, but not so on Earth. Though the planet was peopled by races physically fit, the tribes languished in the depths of savagery and moral stagnation. Adam and Eve rapidly began to feel overwhelmed by their circumstances. (Click to read more 73:1.1; 75:1.1)

The average height of earth's natives at that time was little more than 5 feet — Adam and Eve were larger and more imposing to the point that the native people were in awe verging on worship of them; they decided that Divinity had descended to Earth in bodily form, that Adam and Eve were in reality gods or else so near so as to be worthy of worship. (Click to read more 74:4.1)