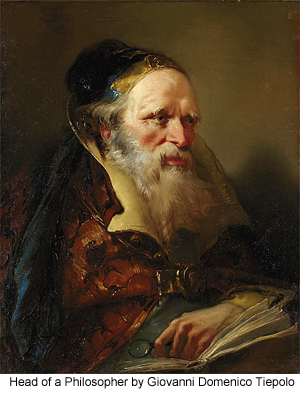 The existence of God can never be proved by scientific experiment or by the pure reason of logical deduction. God can be realized only in the realms of human experience; nevertheless, the true concept of the reality of God is reasonable to logic, plausible to philosophy, essential to religion, and indispensable to any hope of personality survival. ~ The Urantia Book, (1:2.4)

God is to science a cause, to philosophy an idea, to religion a person, even the loving heavenly Father. ~ The Urantia Book, (1:6.2)

All religious philosophy, sooner or later, arrives at the concept of unified universe rule, of one God. ~ The Urantia Book, (3:6.3)

The Father desires all his creatures to be in personal communion with him. He has on Paradise a place to receive all those whose survival status and spiritual nature make possible such attainment. Therefore settle in your philosophy now and forever: To each of you and to all of us, God is approachable, the Father is attainable, the way is open; the forces of divine love and the ways and means of divine administration are all interlocked in an effort to facilitate the advancement of every worthy intelligence of every universe to the Paradise presence of the Universal Father. ~ The Urantia Book, (5:1.8)

Truth is a Factor in Universe Philosophy

Physical facts are fairly uniform, but truth is a living and flexible factor in the philosophy of the universe. ~ The Urantia Book, (2:7.2)

Truth is the basis of science and philosophy, presenting the intellectual foundation of religion. Beauty sponsors art, music, and the meaningful rhythms of all human experience. Goodness embraces the sense of ethics, morality, and religion—experiential perfection-hunger. ~ The Urantia Book, (56:10.10)

The overstressed and isolated morality of modern religion, which fails to hold the devotion and loyalty of many twentieth-century men, would rehabilitate itself if, in addition to its moral mandates, it would give equal consideration to the truths of science, philosophy, and spiritual experience, and to the beauties of the physical creation, the charm of intellectual art, and the grandeur of genuine character achievement.

The religious challenge of this age is to those farseeing and forward-looking men and women of spiritual insight who will dare to construct a new and appealing philosophy of living out of the enlarged and exquisitely integrated modern concepts of cosmic truth, universe beauty, and divine goodness. ~ The Urantia Book, (2:7.9)

Religion is not grounded in the facts of science, the obligations of society, the assumptions of philosophy, or the implied duties of morality. ~ The Urantia Book, (5:5.2)

When religion is divested of a personal God, its prayers translate to the levels of theology and philosophy. ~ The Urantia Book, (91:2.5)

Religion can never become a scientific fact. Philosophy may, indeed, rest on a scientific basis, but religion will ever remain either evolutionary or revelatory, or a possible combination of both, as it is in the world today. ~ The Urantia Book, (92:7.1)

The barbarous idea of appeasing an angry God, of propitiating an offended Lord, of winning the favor of Deity through sacrifices and penance and even by the shedding of blood, represents a religion wholly puerile and primitive, a philosophy unworthy of an enlightened age of science and truth. Such beliefs are utterly repulsive to the celestial beings and the divine rulers who serve and reign in the universes. It is an affront to God to believe, hold, or teach that innocent blood must be shed in order to win his favor or to divert the fictitious divine wrath. ~ The Urantia Book, (4:5.4)

The Intervening Activities of Art and Philosophy

The domains of philosophy and art intervene between the nonreligious and the religious activities of the human self. Through art and philosophy the material-minded man is inveigled into the contemplation of the spiritual realities and universe values of eternal meanings. ~ The Urantia Book, (5:4.4)

Who Knew? Science and Philosophy

The entire science of mathematics, the whole domain of philosophy, the highest physics or chemistry, could not predict or know that the union of two gaseous hydrogen atoms with one gaseous oxygen atom would result in a new and qualitatively superadditive substance—liquid water. The understanding knowledge of this one physiochemical phenomenon should have prevented the development of materialistic philosophy and mechanistic cosmology. ~ The Urantia Book, (12:9.3)

But not all the suppositions of natural philosophy are valid; for example, the hypothetical ether, which represents an ingenious attempt of man to unify his ignorance of space phenomena. The philosophy of the universe cannot be predicated on the observations of so-called science. If such a metamorphosis could not be seen, a scientist would be inclined to deny the possibility of developing a butterfly out of a caterpillar. ~ The Urantia Book, (42:9.4)

Harmony is the keynote of the central universe, and detectable order prevails on Paradise. Proper conduct is essential to progress by way of knowledge, through philosophy, to the spiritual heights of spontaneous worship. ~ The Urantia Book, (27:4.2)

When the philosophy of man leans heavily toward the world of matter, it becomes rationalistic or naturalistic. When philosophy inclines particularly toward the spiritual level, it becomes idealistic or even mystical. When philosophy is so unfortunate as to lean upon metaphysics, it unfailingly becomes skeptical, confused. In past ages, most of man's knowledge and intellectual evaluations have fallen into one of these three distortions of perception. Philosophy dare not project its interpretations of reality in the linear fashion of logic; it must never fail to reckon with the elliptic symmetry of reality and with the essential curvature of all relation concepts. ~ The Urantia Book, (103:6.14)

A mechanistic philosophy of life and the universe cannot be scientific because science recognizes and deals only with materials and facts. Philosophy is inevitably superscientific. Man is a material fact of nature, but his life is a phenomenon which transcends the material levels of nature in that it exhibits the control attributes of mind and the creative qualities of spirit. ~ The Urantia Book, (195:7.9)

Any scientific interpretation of the material universe is valueless unless it provides due recognition for the scientist. No appreciation of art is genuine unless it accords recognition to the artist. No evaluation of morals is worth while unless it includes the moralist. No recognition of philosophy is edifying if it ignores the philosopher, and religion cannot exist without the real experience of the religionist who, in and through this very experience, is seeking to find God and to know him. Likewise is the universe of universes without significance apart from the I AM, the infinite God who made it and unceasingly manages it. ~ The Urantia Book, (195:7.18)

Next to the supreme satisfaction of worship is the exhilaration of philosophy. Never do you climb so high or advance so far that there do not remain a thousand mysteries which demand the employment of philosophy in an attempted solution. ~ The Urantia Book, (27:6.1)

Education recently passed from the control of the clergy to that of lawyers and businessmen. Eventually it must be given over to the philosophers and the scientists. Teachers must be free beings, real leaders, to the end that philosophy, the search for wisdom, may become the chief educational pursuit. ~ The Urantia Book, (71:7.4)

Mota is more than a superior philosophy; it is to philosophy as two eyes are to one; it has a stereoscopic effect on meanings and values. Material man sees the universe, as it were, with but one eye—flat. Mansion world students achieve cosmic perspective—depth—by superimposing the perceptions of the morontia life upon the perceptions of the physical life. ~ The Urantia Book, (48:6.17)

One Philosophy Can Unite

No evolutionary world can hope to progress beyond the first stage of settledness in light until it has achieved one language, one religion, and one philosophy. Being of one race greatly facilitates such achievement, but the many peoples of Urantia do not preclude the attainment of higher stages. ~ The Urantia Book, (55:3.15)

In the ideal state, education continues throughout life, and philosophy sometimes becomes the chief pursuit of its citizens. The citizens of such a commonwealth pursue wisdom as an enhancement of insight into the significance of human relations, the meanings of reality, the nobility of values, the goals of living, and the glories of cosmic destiny. ~ The Urantia Book, (71:7.2)

The union of the scientific attitude and the religious insight by the mediation of experiential philosophy is part of man's long Paradise-ascension experience. The approximations of mathematics and the certainties of insight will always require the harmonizing function of mind logic on all levels of experience short of the maximum attainment of the Supreme. ~ The Urantia Book, (103:7.4)

Although religious experience is a purely spiritual subjective phenomenon, such an experience embraces a positive and living faith attitude toward the highest realms of universe objective reality. The ideal of religious philosophy is such a faith-trust as would lead man unqualifiedly to depend upon the absolute love of the infinite Father of the universe of universes. Such a genuine religious experience far transcends the philosophic objectification of idealistic desire; it actually takes salvation for granted and concerns itself only with learning and doing the will of the Father in Paradise. The earmarks of such a religion are: faith in a supreme Deity, hope of eternal survival, and love, especially of one's fellows. ~ The Urantia Book, (103:95.5)