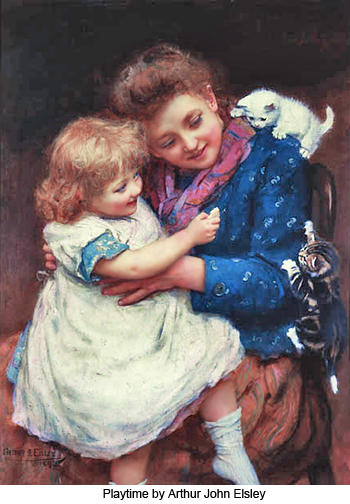 Home is Where Mother Is

The early home was founded upon the sex restlessness of the male when deprived of frequent gratification and upon that devoted mother love of the human female, which in measure she shares with the females of all the higher animals. The presence of a helpless baby determined the early differentiation of male and female activities; the woman had to maintain a settled residence where she could cultivate the soil. And from earliest times, where woman was has always been regarded as the home. ~ The Urantia Book, (68:2.6)

Monogamy is the yardstick which measures the advance of social civilization as distinguished from purely biologic evolution. Monogamy is not necessarily biologic or natural, but it is indispensable to the immediate maintenance and further development of social civilization. It contributes to a delicacy of sentiment, a refinement of moral character, and a spiritual growth which are utterly impossible in polygamy. A woman never can become an ideal mother when she is all the while compelled to engage in rivalry for her husband's affections. ~ The Urantia Book, (83:6.7)

A family of some simple sort was insured by the fact that the reproductive function entails the mother-child relationship. Mother love is instinctive; it did not originate in the mores as did marriage. All mammalian mother love is the inherent endowment of the adjutant mind-spirits of the local universe and is in strength and devotion always directly proportional to the length of the helpless infancy of the species.

The mother and child relation is natural, strong, and instinctive, and one which, therefore, constrained primitive women to submit to many strange conditions and to endure untold hardships. This compelling mother love is the handicapping emotion which has always placed woman at such a tremendous disadvantage in all her struggles with man. Even at that, maternal instinct in the human species is not overpowering; it may be thwarted by ambition, selfishness, and religious conviction.

While the mother-child association is neither marriage nor home, it was the nucleus from which both sprang. The great advance in the evolution of mating came when these temporary partnerships lasted long enough to rear the resultant offspring, for that was homemaking. ~ The Urantia Book, (84:1.6)

"The Hand That Rocks The Cradle..."

Women seem to have more intuition than men, but they also appear to be somewhat less logical. Woman, however, has always been the moral standard-bearer and the spiritual leader of mankind. The hand that rocks the cradle still fraternizes with destiny. ~ The Urantia Book, (84:6.4)