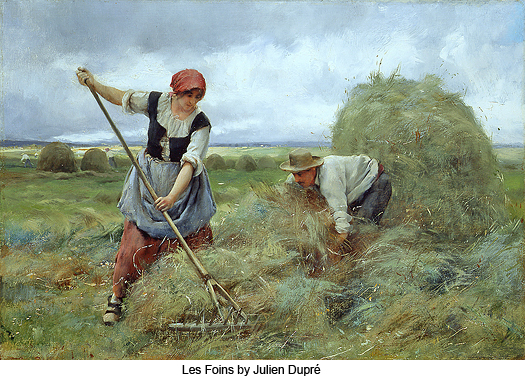 A Commonality Among Evolutionary Will Beings

Young are usually born singly, multiple births being the exception, and the family life is fairly uniform on all types of planets. Sex equality prevails on all advanced worlds; male and female are equal in mind endowment and spiritual status. We do not regard a planet as having emerged from barbarism so long as one sex seeks to tyrannize over the other. ~ The Urantia Book, (49:4.4)

This is the dispensation of the realization of sex equality. On some planets the male may rule the female; on others the reverse prevails. During this age normal worlds establish full equality of the sexes, this being preliminary to the fuller realization of the ideals of home life. This is the dawn of the golden age of the home. The idea of tribal rule gradually gives way to the dual concept of national life and family life. ~ The Urantia Book, (52:2.7)

Adam and Eve - The Models of Sex Equality

These Material Sons (the Adams) and Material Daughters (the Eves) are equal to each other, differing only in reproductive nature and in certain chemical endowments. They are equal but differential, male and female—hence complemental—and are designed to serve on almost all assignments in pairs. ~ The Urantia Book, (51:1.3)

Adam endeavored to teach the races sex equality. The way Eve worked by the side of her husband made a profound impression upon all dwellers in the Garden. Adam definitely taught them that the woman, equally with the man, contributes those life factors which unite to form a new being. Theretofore, mankind had presumed that all procreation resided in the "loins of the father." They had looked upon the mother as being merely a provision for nurturing the unborn and nursing the newborn. ~ Jesus, The Urantia Book, (74:7.22)

Divorce and Equality - How Jesus Viewed It

The Pharisees had even gone so far as to teach that divorce of this easy variety was a special dispensation granted the Jewish people, particularly the Pharisees. And so, while Jesus refused to make pronouncements dealing with marriage and divorce, he did most bitterly denounce these shameful floutings of the marriage relationship and pointed out their injustice to women and children. He never sanctioned any divorce practice which gave man any advantage over woman; the Master countenanced only those teachings which accorded women equality with men. ~ The Urantia Book, (167:5.4)

Before the teachings of Jesus which culminated in Pentecost, women had little or no spiritual standing in the tenets of the older religions. After Pentecost, in the brotherhood of the kingdom woman stood before God on an equality with man. Among the one hundred and twenty who received this special visitation of the spirit were many of the women disciples, and they shared these blessings equally with the men believers. No longer can man presume to monopolize the ministry of religious service. The Pharisee might go on thanking God that he was "not born a woman, a leper, or a gentile," but among the followers of Jesus woman has been forever set free from all religious discriminations based on sex. Pentecost obliterated all religious discrimination founded on racial distinction, cultural differences, social caste, or sex prejudice. No wonder these believers in the new religion would cry out, "Where the spirit of the Lord is, there is liberty." ~ The Urantia Book, (194:3.14)

Woman is man's equal partner in race reproduction, hence just as important in the unfolding of racial evolution; therefore has evolution increasingly worked toward the realization of women's rights. But women's rights are by no means men's rights. Woman cannot thrive on man's rights any more than man can prosper on woman's rights.

Each sex has its own distinctive sphere of existence, together with its own rights within that sphere. If woman aspires literally to enjoy all of man's rights, then, sooner or later, pitiless and emotionless competition will certainly replace that chivalry and special consideration which many women now enjoy, and which they have so recently won from men.

Civilization never can obliterate the behavior gulf between the sexes. From age to age the mores change, but instinct never. Innate maternal affection will never permit emancipated woman to become man's serious rival in industry. Forever each sex will remain supreme in its own domain, domains determined by biologic differentiation and by mental dissimilarity.

Each sex will always have its own special sphere, albeit they will ever and anon overlap. Only socially will men and women compete on equal terms. ~ The Urantia Book, (84:5.11)

The due recognition of sex equality and the co-ordinated functioning of men and women in the home, school, and church, with specialized service of women in industry and government. ~ The Urantia Book, (71:8.10)