The Urantia Book On Physical Evolution 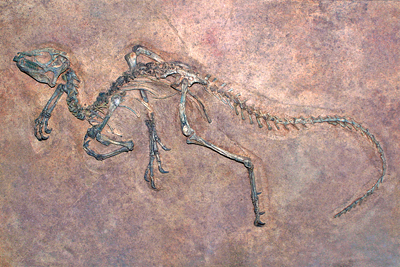 If spending so much time in effecting the evolutionary changes of life development occasions perplexity, I would say that we cannot time the life processes to unfold any faster than the physical metamorphoses of a planet will permit. We must wait upon the natural, physical development of a planet; we have absolutely no control over geologic evolution. If the physical conditions would allow, we could arrange for the completed evolution of life in considerably less than one million years. But we are all under the jurisdiction of the Supreme Rulers of Paradise, and time is nonexistent on Paradise. ~ The Urantia Book, (65:8.2)

The fact of evolution is not a modern discovery; the ancients understood the slow and evolutionary character of human progress. The early Greeks had clear ideas of this despite their proximity to Mesopotamia. Although the various races of earth became sadly mixed up in their notions of evolution, nevertheless, many of the primitive tribes believed and taught that they were the descendants of various animals. Primitive peoples made a practice of selecting for their "totems" the animals of their supposed ancestry. Certain North American Indian tribes believed they originated from beavers and coyotes. Certain African tribes teach that they are descended from the hyena, a Malay tribe from the lemur, a New Guinea group from the parrot. ~ The Urantia Book, (74:8.5)

A Cosmic Technique for Growth

Man cannot cause growth, but he can supply favorable conditions. Growth is always unconscious, be it physical, intellectual, or spiritual. Love thus grows; it cannot be created, manufactured, or purchased; it must grow. Evolution is a cosmic technique of growth. ~ The Urantia Book, (100:3.7)

Evolution is the rule of human development, but the process itself varies greatly on different worlds. Life is sometimes initiated in one center, sometimes in three, as it was on Urantia. On the atmospheric worlds it usually has a marine origin, but not always; much depends on the physical status of a planet. ~ The Urantia Book, (49:1.4)

The Struggle for Perfection

The time universes are not perfect; that is their destiny. The struggle for perfection pertains not only to the intellectual and the spiritual levels but also to the physical level of energy and mass. The settlement of the seven superuniverses in light and life presupposes their attainment of physical stability. And it is conjectured that the final attainment of material equilibrium will signify the completed evolution of the physical control of the Almighty. ~ The Urantia Book, (116:5.12)

When Urantia astronomers peer through their increasingly powerful telescopes into the mysterious stretches of outer space and there behold the amazing evolution of almost countless physical universes, they should realize that they are gazing upon the mighty outworking of the unsearchable plans of the Architects of the Master Universe. ~ The Urantia Book, (12:2.1)

The progress of civilization is hardly alike on any two planets. The details of the unfoldment of mortal evolution are very different on numerous dissimilar worlds. Notwithstanding these many diversifications of planetary development along physical, intellectual, and social lines, all evolutionary spheres progress in certain well-defined directions. ~ The Urantia Book, (50:5.2)

The process of planetary evolution is orderly and controlled. The development of higher organisms from lower groupings of life is not accidental. Sometimes evolutionary progress is temporarily delayed by the destruction of certain favorable lines of life plasm carried in a selected species. It often requires ages upon ages to recoup the damage occasioned by the loss of a single superior strain of human heredity. These selected and superior strains of living protoplasm should be jealously and intelligently guarded when once they make their appearance. And on most of the inhabited worlds these superior potentials of life are valued much more highly than on Urantia. ~ The Urantia Book, (49:1.7)

All of this tremendous activity is a normal part of the making of an evolutionary world on the order of Urantia and constitutes the astronomic preliminaries to the setting of the stage for the beginning of the physical evolution of such worlds of space in preparation for the life adventures of time. ~ The Urantia Book, (57:6.11)

The dinosaurs, for all their enormous mass, were all but brainless animals, lacking the intelligence to provide sufficient food to nourish such enormous bodies. And so did these sluggish land reptiles perish in ever-increasing numbers. Henceforth, evolution will follow the growth of brains, not physical bulk, and the development of brains will characterize each succeeding epoch of animal evolution and planetary progress. ~ The Urantia Book, (60:2.14)

These aggressive little animals multiplied and spread over the Mesopotamian peninsula for more than one thousand years, constantly improving in physical type and general intelligence. And it was just seventy generations after this new tribe had taken origin from the highest type of lemur ancestor that the next epoch-making development occurred—the sudden differentiation of the ancestors of the next vital step in the evolution of human beings on Urantia. ~ The Urantia Book, (62:2.6)

The continuation of such biologic adjustments is illustrated by the evolution of teeth in the higher Urantia mammals; these attained to thirty-six in man's remote ancestors, and then began an adaptative readjustment toward thirty-two in the dawn man and his near relatives. Now the human species is slowly gravitating toward twenty-eight. The process of evolution is still actively and adaptatively in progress on this planet. ~ The Urantia Book, (65:6.5)

The whole principle of biologic evolution makes it impossible for primitive man to appear on the inhabited worlds with any large endowment of self-restraint. Therefore does the same creative design which purposed evolution likewise provide those external restraints of time and space, hunger and fear, which effectively circumscribe the subspiritual choice range of such uncultured creatures. As man's mind successfully overstrides increasingly difficult barriers, this same creative design has also provided for the slow accumulation of the racial heritage of painfully garnered experiential wisdom—in other words, for the maintenance of a balance between the diminishing external restraints and the augmenting internal restraints. ~ The Urantia Book, (118:8.5)

See Paper 65, The Overcontrol of Evolution