The Urantia Book On Mind Evolution 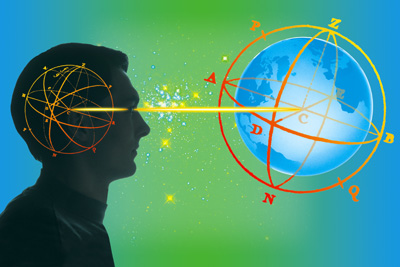 God Is The Dominant Mind

The phenomenon of progressive evolution associated with cosmic self-maintenance is universal. The evolutionary capacity of the universe is inexhaustible in the infinity of spontaneity. Progress towards harmonious unity, a growing experiential synthesis superimposed on an ever-increasing complexity of relationships, could be effected only by a purposive and dominant mind. ~ The Urantia Book, (42:11.7)

Organic evolution is a fact; purposive or progressive evolution is a truth which makes consistent the otherwise contradictory phenomena of the ever-ascending achievements of evolution. The higher any scientist progresses in his chosen science, the more will he abandon the theories of materialistic fact in favor of the cosmic truth of the dominance of the Supreme Mind. Materialism cheapens human life; the gospel of Jesus tremendously enhances and supernally exalts every mortal. Mortal existence must be visualized as consisting in the intriguing and fascinating experience of the realization of the reality of the meeting of the human upreach and the divine and saving downreach. ~ The Urantia Book, (102:6.10)

Mind is of Divine Origin

Mind, on Urantia, is a compromise between the essence of thought perfection and the evolving mentality of your immature human nature. The plan for your intellectual evolution is, indeed, one of sublime perfection, but you are far short of that divine goal as you function in the tabernacles of the flesh. Mind is truly of divine origin, and it does have a divine destiny, but your mortal minds are not yet of divine dignity. ~ The Urantia Book, (9:5.6)

This Paradise spirit that indwells the minds of the mortals of time and there fosters the evolution of the immortal soul of the surviving creature is of the nature and divinity of theUniversal Father. But the minds of such evolutionary creatures originate in the local universes and must gain divine perfection by achieving those experiential transformations of spiritual attainment which are the inevitable result of a creature's choosing to do the will of the Father in heaven. ~ The Urantia Book, (1:3.6)

Primitive religion prepared the soil of the human mind, by the powerful and awesome force of false fear, for the bestowal of a bona fide spiritual force of supernatural origin, the Thought Adjuster. And the divine Adjusters have ever since labored to transmute God-fear into God-love. Evolution may be slow, but it is unerringly effective. ~ The Urantia Book, (86:7.6)

In the inner experience of man, mind is joined to matter. Such material-linked minds cannot survive mortal death. The technique of survival is embraced in those adjustments of the human will and those transformations in the mortal mind whereby such a God-conscious intellect gradually becomes spirit taught and eventually spirit led. This evolution of the human mind from matter association to spirit union results in the transmutation of the potentially spirit phases of the mortal mind into the morontia realities of the immortal soul. Mortal mind subservient to matter is destined to become increasingly material and consequently to suffer eventual personality extinction; mind yielded to spirit is destined to become increasingly spiritual and ultimately to achieve oneness with the surviving and guiding divine spirit and in this way to attain survival and eternity of personality existence. ~The Urantia Book, (1:3.7)

This phenomenon constitutes one of the most perplexing mysteries of the universes—the evolution of an immortal soul within the mind of a mortal and material creature. ~ The Urantia Book, (13:1.22)

The survival of mortal creatures is wholly predicated on the evolvement of an immortal soul within the mortal mind. ~ The Urantia Book, (36:6.5)

The mistakes of mortal mind and the errors of human conduct may markedly delay the evolution of the soul, although they cannot inhibit such a morontia phenomenon when once it has been initiated by the indwelling Adjuster with the consent of the creature will. But at any time prior to mortal death this same material and human will is empowered to rescind such a choice and to reject survival. Even after survival the ascending mortal still retains this prerogative. ~ The Urantia Book, (111:3.1)

The Potential of Spirit Evolution Through Minded Decisions

Intellectual selves have their origin in the cosmic mind much as nebulae take origin in the cosmic energies of universe space. On the human (hence personal) level of intellectual selves the potential of spirit evolution becomes dominant, with the assent of the mortal mind, because of the spiritual endowments of the human personality together with the creative presence of an entity-point of absolute value in such human selves. ~ The Urantia Book, (111:1.2)

Material evolution has provided you a life machine, your body; the Father himself has endowed you with the purest spirit reality known in the universe, your Thought Adjuster. But into your hands, subject to your own decisions, has been given mind, and it is by mind that you live or die. It is within this mind and with this mind that you make those moral decisions which enable you to achieve Adjusterlikeness, and that is Godlikeness. ~ The Urantia Book, (111:1.4)

This supernal transaction of evolving the immortal soul is made possible because the mortal mind is first personal and second is in contact with superanimal realities; it possesses a supermaterial endowment of cosmic ministry which insures the evolution of a moral nature capable of making moral decisions, thereby effecting a bona fide creative contact with the associated spiritual ministries and with the indwelling Thought Adjuster. ~ The Urantia Book, (111:2.9)

Mind, while not a physical evolution, is wholly dependent on the brain capacity afforded by purely physical and evolutionary developments. ~ The Urantia Book, (58:6.7)

The Adjutant Spirits Enliven and Evolve Mind From Earliest Times

It is the presence of the seven adjutant mind-spirits on the primitive worlds that conditions the course of organic evolution; that explains why evolution is purposeful and not accidental. These adjutants represent that function of the mind ministry of the Infinite Spirit which is extended to the lower orders of intelligent life through the operations of a local universe Mother Spirit. The adjutants are the children of the Universe Mother Spirit and constitute her personal ministry to the material minds of the realms. Wherever and whenever such mind is manifest, these spirits are variously functioning. ~ The Urantia Book, (36:5.1)

The seven adjutant mind-spirits are called by names which are the equivalents of the following designations: intuition, understanding, courage, knowledge, counsel, worship, and wisdom. These mind-spirits send forth their influence into all the inhabited worlds as a differential urge, each seeking receptivity capacity for manifestation quite apart from the degree to which its fellows may find reception and opportunity for function. ~ The Urantia Book, (36:5.2)

The adjutant mind-spirits experientially grow, but they never become personal. They evolve in function, and the function of the first five in the animal orders is to a certain extent essential to the function of all seven as human intellect. This animal relationship makes the adjutants more practically effective as human mind; hence animals are to a certain extent indispensable to man's intellectual as well as to his physical evolution. ~ The Urantia Book, (36:5.13)

The adjutants function exclusively in the evolution of experiencing mind up to the level of the sixth phase, the spirit of worship. ~ The Urantia Book, (65:7.7)

Mortal man first experiences the ministry of the Spirit in conjunction with mind when the purely animal mind of evolutionary creatures develops reception capacity for the adjutants of worship and of wisdom. ~ The Urantia Book, (34:5.3)

Intellectual, social, moral, and spiritual evolution are dependent on the mind ministry of the seven adjutant spirits and their superphysical associates. ~ The Urantia Book, (65:6.10)

Click here to see a more detailed study of Evolution

What did Jesus teach about MIND? Click here to read more