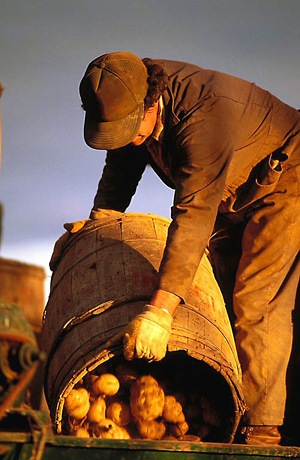 All Paradise Sons Practice a Vocation

As Jesus worked on your world as the carpenter's son, so do other Paradise Sons labor in various capacities on their bestowal planets. You could hardly think of a vocation that has not been followed by some Paradise Son in the course of his bestowal on some one of the evolutionary planets of time. ~ The Urantia Book, (20:6.2)

From Government on a Neighboring Planet:

Labor is becoming more honorable on this continent, and all able-bodied citizens over eighteen work either at home and on farms, at some recognized industry, on the public works where the temporarily unemployed are absorbed, or else in the corps of compulsory laborers in the mines. ~ The Urantia Book, (72:5.11)

The courses pursued by such commissioned officers are four years in length and are invariably correlated with the mastery of some trade or profession. Military training is never given without this associated industrial, scientific, or professional schooling. When military training is finished, the individual has, during his four years' course, received one half of the education imparted in any of the special schools where the courses are likewise four years in length. In this way the creation of a professional military class is avoided by providing this opportunity for a large number of men to support themselves while securing the first half of a technical or professional training.

Military service during peacetime is purely voluntary, and the enlistments in all branches of the service are for four years, during which every man pursues some special line of study in addition to the mastery of military tactics. Training in music is one of the chief pursuits of the central military schools and of the twenty-five training camps distributed about the periphery of the continent. During periods of industrial slackness many thousands of unemployed are automatically utilized in upbuilding the military defenses of the continent on land and sea and in the air. ~ The Urantia Book, (72:11.2)

In the early days the only energy applied to land cultivation was man power. It was a long struggle to substitute oxen for men since this threw men out of employment. Latterly, machines have begun to displace men, and every such advance is directly contributory to the progress of society because it liberates man power for the accomplishment of more valuable tasks.

Science guided by wisdom, may become man's great social liberator. A mechanical age can prove disastrous only to a nation whose intellectual level is too low to discover those wise methods and sound techniques for successfully adjusting to the transition difficulties arising from the sudden loss of employment by large numbers consequent upon the too rapid invention of new types of laborsaving machinery. ~ The Urantia Book, (81:6.21)

Social, artistic, technical, and industrial specialists will continue to multiply and increase in skill and dexterity. And this diversification of ability and dissimilarity of employment will eventually weaken and disintegrate human society if effective means of co-ordination and co-operation are not developed. But the intelligence which is capable of such inventiveness and such specialization should be wholly competent to devise adequate methods of control and adjustment for all problems resulting from the rapid growth of invention and the accelerated pace of cultural expansion.

11. Place-finding devices. The next age of social development will be embodied in a better and more effective co-operation and co-ordination of ever-increasing and expanding specialization. And as labor more and more diversifies, some technique for directing individuals to suitable employment must be devised. Machinery is not the only cause for unemployment among the civilized peoples of Urantia. Economic complexity and the steady increase of industrial and professional specialism add to the problems of labor placement.

It is not enough to train men for work; in a complex society there must also be provided efficient methods of place finding. Before training citizens in the highly specialized techniques of earning a living, they should be trained in one or more methods of commonplace labor, trades or callings which could be utilized when they were transiently unemployed in their specialized work. No civilization can survive the long-time harboring of large classes of unemployed. In time, even the best of citizens will become distorted and demoralized by accepting support from the public treasury. Even private charity becomes pernicious when long extended to able-bodied citizens. ~ The Urantia Book, (81:6.30)

An idea is only a theoretical plan for action, while a positive decision is a validated plan of action. A stereotype is a plan of action accepted without validation. The materials out of which to build a personal philosophy of religion are derived from both the inner and the environmental experience of the individual. The social status, economic conditions, educational opportunities, moral trends, institutional influences, political developments, racial tendencies, and the religious teachings of one's time and place all become factors in the formulation of a personal philosophy of religion. Even the inherent temperament and intellectual bent markedly determine the pattern of religious philosophy. Vocation, marriage, and kindred all influence the evolution of one's personal standards of life. ~ The Urantia Book, (101:7.1)

When on his first trip with his father to observe the fishing industry on the lake of Galilee Jesus had just about made up his mind to become a fisherman; but close association with his father's vocation later on influenced him to become a carpenter, while still later a combination of influences led him to the final choice of becoming a religious teacher of a new order. ~ The Urantia Book, (124:2.10)

Our Vocation Can Help us to "Shine our Light"

While light dispels darkness, it can also be so "blinding" as to confuse and frustrate. We are admonished to let our light so shine that our fellows will be guided into new and godly paths of enhanced living. Our light should so shine as not to attract attention to self. Even one's vocation can be utilized as an effective "reflector" for the dissemination of this light of life. ~ The Urantia Book, (140:4.5)

Never forget there is only one adventure which is more satisfying and thrilling than the attempt to discover the will of the living God, and that is the supreme experience of honestly trying to do that divine will. And fail not to remember that the will of God can be done in any earthly occupation. Some callings are not holy and others secular. All things are sacred in the lives of those who are spirit led; that is, subordinated to truth, ennobled by love, dominated by mercy, and restrained by fairness— justice. The spirit which my Father and I shall send into the world is not only the Spirit of Truth but also the spirit of idealistic beauty. ~ The Urantia Book, (155:6.11)

On this same occasion the Master talked to the group about the desirability of possessing well-balanced characters. He recognized that it was necessary for most men to devote themselves to the mastery of some vocation, but he deplored all tendency toward overspecialization, toward becoming narrow-minded and circumscribed in life's activities. He called attention to the fact that any virtue, if carried to extremes, may become a vice. Jesus always preached temperance and taught consistency—proportionate adjustment of life problems. He pointed out that overmuch sympathy and pity may degenerate into serious emotional instability; that enthusiasm may drive on into fanaticism. He discussed one of their former associates whose imagination had led him off into visionary and impractical undertakings. At the same time he warned them against the dangers of the dullness of overconservative mediocrity. ~ The Urantia Book, (149:4.3)

While it is true that many men and women must assiduously apply themselves to some definite pursuit as a livelihood vocation, it is nevertheless wholly desirable that human beings should cultivate a wide range of cultural familiarity with life as it is lived on earth. Truly educated persons are not satisfied with remaining in ignorance of the lives and doings of their fellows. ~ The Urantia Book, (149:4.6)

Help Find Work for Those in Need

Take care that you do not wound the self-respect of timid and fearful souls. Do not indulge in sarcasm at the expense of my simple-minded brethren. Be not cynical with my fear-ridden children. Idleness is destructive of self-respect; therefore, admonish your brethren ever to keep busy at their chosen tasks, and put forth every effort to secure work for those who find themselves without employment. ~ The Urantia Book, (159:3.4)