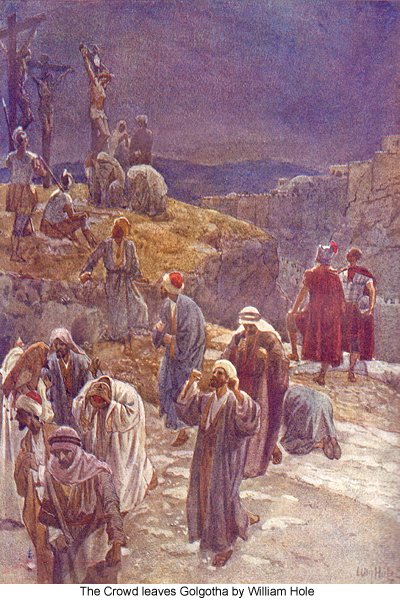 The Atonement Doctrine - the prevailing belief that Jesus' life was sacrificed to atone for the sins of mankind by order of a vengeful God - is one of the great stumbling blocks which confuses us as to the true nature of God. The Urantia Book teaches us that God is neither angry, vengeful nor jealous, and that man is not inherently sinful. And Jesus of Nazareth lived his life in the flesh to establish the kingdom of heaven and to reveal his, and our, loving Heavenly Father - not a wrathful or offended Deity. (See doctrine of the depravity of man)

Below are selected excerpts which explore the concept of atonement in relation to God, Jesus, Paul, Christianity, Abraham and the Cross. Also included are selections regarding the development of this doctrine over eons of time, but the Paper on Sin, Sacrifice and Atonement gives a comprehensive and detailed overview of the ancient origins of these concepts, and it is recommended that you read this instructive paper to further understand how these concepts became ingrained into our civilization and our evolutionary religions.

Righteousness implies that God is the source of the moral law of the universe. Truth exhibits God as a revealer, as a teacher. But love gives and craves affection, seeks understanding fellowship such as exists between parent and child. Righteousness may be the divine thought, but love is a father's attitude. The erroneous supposition that the righteousness of God was irreconcilable with the selfless love of the heavenly Father, presupposed absence of unity in the nature of Deity and led directly to the elaboration of the atonement doctrine, which is a philosophic assault upon both the unity and the free-willness of God. ~ The Urantia Book, (2:6.5)

Origins of the Atonement Doctrine

Very early the Andonic peoples formed the habit of refraining from eating the flesh of the animal of tribal veneration. Presently, in order more suitably to impress the minds of their youths, they evolved a ceremony of reverence which was carried out about the body of one of these venerated animals; and still later on, this primitive performance developed into the more elaborate sacrificial ceremonies of their descendants. And this is the origin of sacrifices as a part of worship. This idea was elaborated by Moses in the Hebrew ritual and was preserved, in principle, by the Apostle Paul as the doctrine of atonement for sin by "the shedding of blood." ~ The Urantia Book, (63:6.4)

The earliest idea of the sacrifice was that of a neutrality assessment levied by ancestral spirits; only later did the idea of atonement develop. As man got away from the notion of the evolutionary origin of the race, as the traditions of the days of the Planetary Prince and the sojourn of Adam filtered down through time, the concept of sin and of original sin became widespread, so that sacrifice for accidental and personal sin evolved into the doctrine of sacrifice for the atonement of racial sin. The atonement of the sacrifice was a blanket insurance device which covered even the resentment and jealousy of an unknown god. ~ The Urantia Book, (89:4.5)

The evolution of religious observances progressed from placation, avoidance, exorcism, coercion, conciliation, and propitiation to sacrifice, atonement, and redemption. The technique of religious ritual passed from the forms of the primitive cult through fetishes to magic and miracles; and as ritual became more complex in response to man's increasingly complex concept of the supermaterial realms, it was inevitably dominated by medicine men, shamans, and priests. ~ The Urantia Book, (90:0.1)

When primitive man felt that his communion with God had been interrupted, he resorted to sacrifice of some kind in an effort to make atonement, to restore friendly relationship. The hunger and thirst for righteousness leads to the discovery of truth, and truth augments ideals, and this creates new problems for the individual religionists, for our ideals tend to grow by geometrical progression, while our ability to live up to them is enhanced only by arithmetical progression. ~ The Urantia Book, (103:4.2)

This covenant of Melchizedek with Abraham represents the great Urantian agreement between divinity and humanity whereby God agrees to do everything; man only agrees to believe God's promises and follow his instructions. Heretofore it had been believed that salvation could be secured only by works—sacrifices and offerings; now, Melchizedek again brought to Urantia the good news that salvation, favor with God, is to be had by faith. But this gospel of simple faith in God was too advanced; the Semitic tribesmen subsequently preferred to go back to the older sacrifices and atonement for sin by the shedding of blood. ~ The Urantia Book, (93:6.4)

Jesus swept away all of the ceremonials of sacrifice and atonement. He destroyed the basis of all this fictitious guilt and sense of isolation in the universe by declaring that man is a child of God; the creature-Creator relationship was placed on a child-parent basis. God becomes a loving Father to his mortal sons and daughters. All ceremonials not a legitimate part of such an intimate family relationship are forever abrogated.

God the Father deals with man his child on the basis, not of actual virtue or worthiness, but in recognition of the child's motivation—the creature purpose and intent. The relationship is one of parent-child association and is actuated by divine love. ~ The Urantia Book, (103:4.4)

A Creator Son did not incarnate in the likeness of mortal flesh and bestow himself upon the humanity of Urantia to reconcile an angry God but rather to win all mankind to the recognition of the Father's love and to the realization of their sonship with God. After all, even the great advocate of the atonement doctrine realized something of this truth, for he declared that "God was in Christ reconciling the world to himself." ~ The Urantia Book, (98:7.1)

Many, but not all, of Philo's inconsistencies resulting from an effort to combine Greek mystical philosophy and Roman Stoic doctrines with the legalistic theology of the Hebrews, Paul recognized and wisely eliminated from his pre-Christian basic theology. Philo led the way for Paul more fully to restore the concept of the Paradise Trinity, which had long been dormant in Jewish theology. In only one matter did Paul fail to keep pace with Philo or to transcend the teachings of this wealthy and educated Jew of Alexandria, and that was the doctrine of the atonement; Philo taught deliverance from the doctrine of forgiveness only by the shedding of blood. He also possibly glimpsed the reality and presence of the Thought Adjusters more clearly than did Paul. But Paul's theory of original sin, the doctrines of hereditary guilt and innate evil and redemption therefrom, was partially Mithraic in origin, having little in common with Hebrew theology, Philo's philosophy, or Jesus' teachings. Some phases of Paul's teachings regarding original sin and the atonement were original with himself. ~ The Urantia Book, (121:6.5)

The gospel of Jesus, as it was embodied in Paul's cult of Antioch Christianity, became blended with the following teachings:

The Apostle Paul, in his efforts to bring the teachings of Jesus to the favorable notice of certain groups in his day, wrote many letters of instruction and admonition. Other teachers of Jesus' gospel did likewise, but none of them realized that some of these writings would subsequently be brought together by those who would set them forth as the embodiment of the teachings of Jesus. And so, while so-called Christianity does contain more of the Master's gospel than any other religion, it does also contain much that Jesus did not teach. Aside from the incorporation of many teachings from the Persian mysteries and much of the Greek philosophy into early Christianity, two great mistakes were made:

The effort to connect the gospel teaching directly onto the Jewish theology, as illustrated by the Christian doctrines of the atonement—the teaching that Jesus was the sacrificed Son who would satisfy the Father's stern justice and appease the divine wrath. These teachings originated in a praiseworthy effort to make the gospel of the kingdom more acceptable to disbelieving Jews. Though these efforts failed as far as winning the Jews was concerned, they did not fail to confuse and alienate many honest souls in all subsequent generations. ~ The Urantia Book, (149:2.2)

The Meaning of Jesus' Death on the Cross

Although Jesus did not die this death on the cross to atone for the racial guilt of mortal man nor to provide some sort of effective approach to an otherwise offended and unforgiving God; even though the Son of Man did not offer himself as a sacrifice to appease the wrath of God and to open the way for sinful man to obtain salvation; notwithstanding that these ideas of atonement and propitiation are erroneous, nonetheless, there are significances attached to this death of Jesus on the cross which should not be overlooked. It is a fact that Urantia has become known among other neighboring inhabited planets as the "World of the Cross." ~ The Urantia Book, (188:4.1)

When once you grasp the idea of God as a true and loving Father, the only concept which Jesus ever taught, you must forthwith, in all consistency, utterly abandon all those primitive notions about God as an offended monarch, a stern and all-powerful ruler whose chief delight is to detect his subjects in wrongdoing and to see that they are adequately punished, unless some being almost equal to himself should volunteer to suffer for them, to die as a substitute and in their stead. The whole idea of ransom and atonement is incompatible with the concept of God as it was taught and exemplified by Jesus of Nazareth. The infinite love of God is not secondary to anything in the divine nature. ~ The Urantia Book, (188:4.8)

All this concept of atonement and sacrificial salvation is rooted and grounded in selfishness. Jesus taught that service to one's fellows is the highest concept of the brotherhood of spirit believers.Salvation should be taken for granted by those who believe in the fatherhood of God. The believer's chief concern should not be the selfish desire for personal salvation but rather the unselfish urge to love and, therefore, serve one's fellows even as Jesus loved and served mortal men. ~ The Urantia Book, (188:4.9)

This entire idea of the ransom of the atonement places salvation upon a plane of unreality; such a concept is purely philosophic. Human salvation is real; it is based on two realities which may be grasped by the creature's faith and thereby become incorporated into individual human experience: the fact of the fatherhood of God and its correlated truth, the brotherhood of man. It is true, after all, that you are to be "forgiven your debts, even as you forgive your debtors." ~ The Urantia Book, (188:4.13)