Dinosaurs and Jesus in the Same Book? 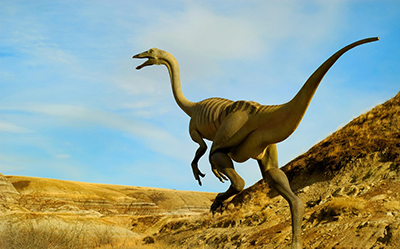 Can you imagine a single book that contains dinosaurs AND Jesus? It's here! And if you like science and love God, you need to read this book!

The Urantia Book spans ALL of human history - from the earliest beginnings of our world and its evolution - including dinosaurs - and is crowned by the most sweeping and inclusive accounting of the life and teachings of Jesus found anywhere.

The Urantia Book satisfies the desire to make sense of science and religion and to reconcile these two topics as never before. There is no conflict with these two realities of life. Both are God-given and both are interwoven together within Urantia Book teachings. Now, that’s modern and smart religion!

The book teaches that the earth is about 4.5 billion years old and that dinosaurs walked the earth 140,000,000 years ago. Man first made his appearance just 1,000,000 years ago - so they never existed together. These facts of human history are brought together in a comprehensive and understandable panorama that includes the facts and the purposes of evolution: creation in time and space.

Dinosaurs - Where do They Fit In?

60:1.9 “140,000,000 years ago...These rapidly evolving reptilian dinosaurs soon became the monarchs of this age. They were egg layers and are distinguished from all animals by their small brains, having brains weighing less than one pound to control bodies later weighing as much as forty tons.”

60:2.1 “120,000,000 years ago a new phase of the reptilian age began. The great event of this period was the evolution and decline of the dinosaurs. Land-animal life reached its greatest development, in point of size, and had virtually perished from the face of the earth by the end of this age. The dinosaurs evolved in all sizes from a species less than two feet long up to the huge noncarnivorous dinosaurs, seventy-five feet long, that have never since been equaled in bulk by any living creation.”

WHEN and WHY Did Dinosaurs Disappear?

60:2.14 “One hundred million years ago the reptilian age was drawing to a close. The dinosaurs, for all their enormous mass, were all but brainless animals, lacking the intelligence to provide sufficient food to nourish such enormous bodies. And so did these sluggish land reptiles perish in ever-increasing numbers. Henceforth, evolution will follow the growth of brains, not physical bulk, and the development of brains will characterize each succeeding epoch of animal evolution and planetary progress.”

Mankind Appears on the Earth

65:2.16 “...the life that was planted on Urantia evolved until the ice age, when man himself first appeared and began his eventful planetary career. And this appearance of primitive man on earth during the ice age was not just an accident; it was by design. The rigors and climatic severity of the glacial era were in every way adapted to the purpose of fostering the production of a hardy type of human being with tremendous survival endowment.”

The story of the first two human beings is one that will thrill and amaze you. It is a story of awakening intelligence, bravery, courage, tragedy, adventure and triumph. It is history; it is OURstory.

“These two remarkable creatures were true human beings. They possessed perfect human thumbs, as had many of their ancestors, while they had just as perfect feet as the present-day human races. They were walkers and runners, not climbers; the grasping function of the big toe was absent, completely absent. When danger drove them to the treetops, they climbed just like the humans of today would. They would climb up the trunk of a tree like a bear and not as would a chimpanzee or a gorilla, swinging up by the branches.

“These first human beings (and their descendants) reached full maturity at twelve years of age and possessed a potential life span of about seventy-five years.”

Click to read more about the First Human Beings

And Where Does Jesus Fit In?

Part IV of The Urantia Book – The Life and Teachings of Jesus. This is the whole story - the real story of Jesus. We learn of Jesus’ true identity before he came to earth, what happened while he was here, and where Jesus is today. After all the preparation in the first three parts of the book, we are presented with a new – and fully accurate – restatement of the entire life of Jesus, the teachings that he brought to humanity, and the inspiring example of an incarnated Divine Son of God housed in human form who lived a full life dedicated to revealing the true nature of God the Father.