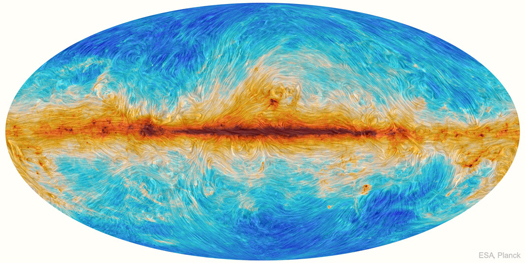 Magnetic Streamlines of the Milky Way

We do not fully comprehend the almost endless changes to which physical energy may be subject. In one universe it appears as light, in another as light plus heat, in another as forms of energy unknown on Urantia; in untold millions of years it may reappear as some form of restless, surging electrical energy or magnetic power; and still later on it may again appear in a subsequent universe as some form of variable matter going through a series of metamorphoses, to be followed by its outward physical disappearance in some great cataclysm of the realms. Thus matter sweeps on, undergoing the transmutations of time but swinging ever true to the circle of eternity; even if long prevented from returning to its source, it is ever responsive thereto, and it ever proceeds in the path ordained by the Infinite Personality who sent it forth.