Home Jesus The Women Who Followed Jesus At The Crucifixion 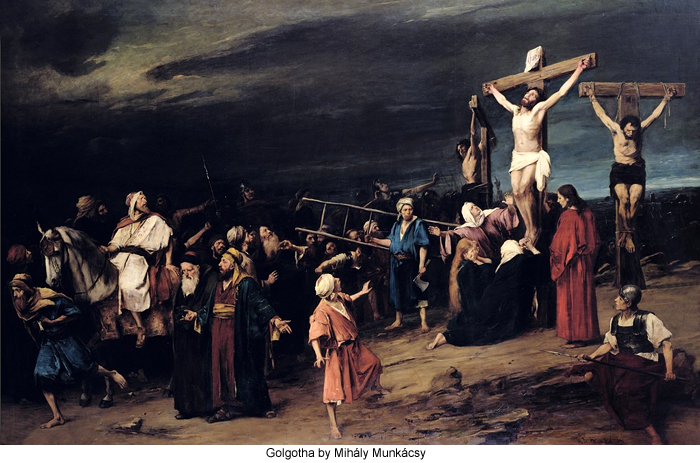 (187:3.1) At about half past nine o'clock this Friday morning, Jesus was hung upon the cross. Before eleven o'clock, upward of one thousand persons had assembled to witness this spectacle of the crucifixion of the Son of Man. Throughout these dreadful hours the unseen hosts of a universe stood in silence while they gazed upon this extraordinary phenomenon of the Creator as he was dying the death of the creature, even the most ignoble death of a condemned criminal.

Standing near the cross at one time or another during the crucifixion were Mary, Ruth,, Jude, John, Salome (John's mother), and a group of earnest women believers including Mary the wife of Clopas and sister of Jesus' mother, Mary Magdalene and Rebecca onetime of Sepphoris. These and other friends of Jesus held their peace while they witnessed his great patience and fortitude and gazed upon his intense sufferings.

Many who passed by wagged their heads and, railing at him, said: "You who would destroy the temple and build it again in three days, save yourself. If you are the Son of God, why do you not come down from your cross?" In like manner some of the rulers of the Jews mocked him, saying, "He saved others, but himself he cannot save." Others said, "If you are the king of the Jews, come down from the cross, and we will believe in you." And later on they mocked him the more, saying: "He trusted in God to deliver him. He even claimed to be the Son of God — look at him now — crucified between two thieves." Even the two thieves also railed at him and cast reproach upon him.

Inasmuch as Jesus would make no reply to their taunts, and since it was nearing noontime of this special preparation day, by half past eleven o'clock most of the jesting and jeering crowd had gone its way; less than fifty persons remained on the scene. The soldiers now prepared to eat lunch and drink their cheap, sour wine as they settled down for the long deathwatch. As they partook of their wine, they derisively offered a toast to Jesus, saying, "Hail and good fortune! to the king of the Jews." And they were astonished at the Master's tolerant regard of their ridicule and mocking.

When Jesus saw them eat and drink, he looked down upon them and said, "I thirst." When the captain of the guard heard Jesus say, "I thirst," he took some of the wine from his bottle and, putting the saturated sponge stopper upon the end of a javelin, raised it to Jesus so that he could moisten his parched lips.

Jesus had purposed to live without resort to his supernatural power, and he likewise elected to die as an ordinary mortal upon the cross. He had lived as a man, and he would die as a man — doing the Father's will.

Mark 15:40 There were also women looking on from afar, among whom were Mary Mag'dalene, and Mary the mother of James the younger and of Joses, and Salo'me, who, when he was in Galilee, followed him, and ministered to him; and also many other women who came up with him to Jerusalem.

Matthew 27:39-44 And those who passed by derided him, wagging their heads and saying, "You who would destroy the temple and build it in three days, save yourself! If you are the Son of God, come down from the cross." So also the chief priests, with the scribes and elders, mocked him, saying, "He saved others; he cannot save himself. He is the King of Israel; let him come down now from the cross, and we will believe in him. He trusts in God; let God deliver him now, if he desires him; for he said, 'I am the Son of God.'" And the robbers who were crucified with him also reviled him in the same way.

35 And the people stood by, watching; but the rulers scoffed at him, saying, "He saved others; let him save himself, if he is the Christ of God, his Chosen One!" The soldiers also mocked him, coming up and offering him vinegar, and saying, "If you are the King of the Jews, save yourself!" There was also an inscription over him, "This is the King of the Jews."

John 19: 28 After this Jesus, knowing that all was now finished, said (to fulfil the scripture), "I thirst." A bowl full of vinegar stood there; so they put a sponge full of the vinegar on hyssop and held it to his mouth.