Bestowal Of The Spirit Of Truth 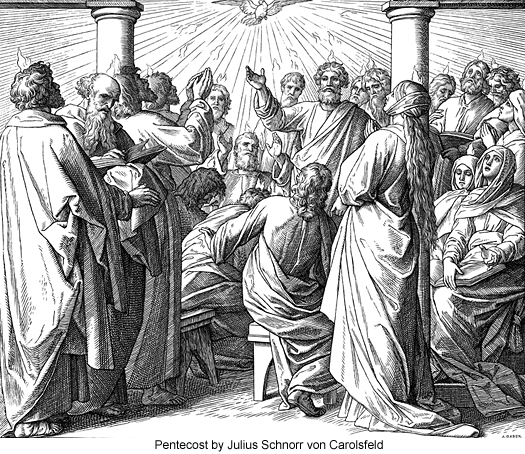 (194:3.6) Do not overlook the fact that the Spirit of Truth was bestowed upon all sincere believers; this gift of the spirit did not come only to the apostles. The one hundred and twenty men and women assembled in the upper chamber all received the new teacher, as did all the honest of heart throughout the whole world. This new teacher was bestowed upon mankind, and every soul received him in accordance with the love for truth and the capacity to grasp and comprehend spiritual realities. At last, true religion is delivered from the custody of priests and all sacred classes and finds its real manifestation in the individual souls of men.

(194:3.14) Before the teachings of Jesus which culminated in Pentecost, women had little or no spiritual standing in the tenets of the older religions. After Pentecost, in the brotherhood of the kingdom woman stood before God on an equality with man. Among the one hundred and twenty who received this special visitation of the spirit were many of the women disciples, and they shared these blessings equally with the men believers. No longer can man presume to monopolize the ministry of religious service. The Pharisee might go on thanking God that he was "not born a woman, a leper, or a gentile," but among the followers of Jesus woman has been forever set free from all religious discriminations based on sex. Pentecost obliterated all religious discrimination founded on racial distinction, cultural differences, social caste, or sex prejudice. No wonder these believers in the new religion would cry out, "Where the spirit of the Lord is, there is liberty."

(194:3.17) Pentecost was the call to spiritual unity among gospel believers. When the spirit descended on the disciples at Jerusalem, the same thing happened in Philadelphia, Alexandria, Alexandria, and at all other places where true believers dwelt. It was literally true that "there was but one heart and soul among the multitude of the believers." The religion of Jesus is the most powerful unifying influence the world has ever known.

Acts 2:1 When the day of Pentecost had come, they were all together in one place. And suddenly a sound came from heaven like the rush of a mighty wind, and it filled all the house where they were sitting.