The Woman With The Spirit Of Infirmity 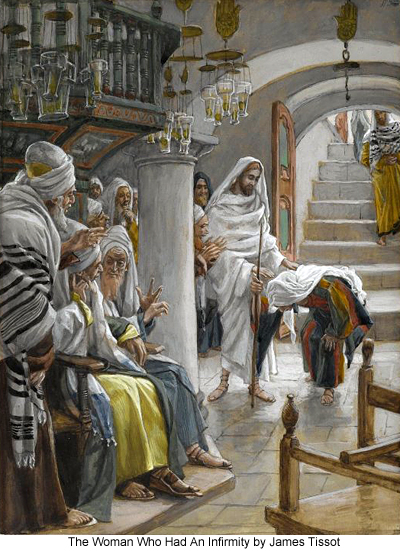 167:3.1 Abner had arranged for the Master to teach in the synagogue on this Sabbath day, the first time Jesus had appeared in a synagogue since they had all been closed to his teachings by order of the Sanhedrin. At the conclusion of the service Jesus looked down before him upon an elderly woman who wore a downcast expression, and who was much bent in form. This woman had long been fear-ridden, and all joy had passed out of her life. As Jesus stepped down from the pulpit, he went over to her and, touching her bowed-over form on the shoulder, said: Woman, if you would only believe, you could be wholly loosed from your spirit of infirmity." And this woman, who had been bowed down and bound up by the depressions of fear for more than eighteen years, believed the words of the Master and by faith straightened up immediately. When this woman saw that she had been made straight, she lifted up her voice and glorified God.

167:3.2 Notwithstanding that this woman's affliction was wholly mental, her bowed-over form being the result of her depressed mind, the people thought that Jesus had healed a real physical disorder. Although the congregation of the synagogue at Philadelphia was friendly toward the teachings of Jesus, the chief ruler of the synagogue was an unfriendly Pharisee. And as he shared the opinion of the congregation that Jesus had healed a physical disorder, and being indignant because Jesus had presumed to do such a thing on the Sabbath, he stood up before the congregation and said: "Are there not six days in which men should do all their work? In these working days come, therefore, and be healed, but not on the Sabbath day."

167:3.3 When the unfriendly ruler had thus spoken, Jesus returned to the speaker's platform and said: "Why play the part of hypocrites? Does not every one of you, on the Sabbath, loose his ox from the stall and lead him forth for watering? If such a service is permissible on the Sabbath day, should not this woman, a daughter of Abraham who has been bound down by evil these eighteen years, be loosed from this bondage and led forth to partake of the waters of liberty and life, even on this Sabbath day?" And as the woman continued to glorify God, his critic was put to shame, and the congregation rejoiced with her that she had been healed.

And there was a woman who had had a spirit of infirmity for eighteen years; she was bent over and could not fully straighten herself. And when Jesus saw her, he called her and said to her, "Woman, you are freed from your infirmity." And he laid his hands upon her, and immediately she was made straight, and she praised God.

But the ruler of the synagogue, indignant because Jesus had healed on the sabbath, said to the people, "There are six days on which work ought to be done; come on those days and be healed, and not on the sabbath day."

Then the Lord answered him, "You hypocrites! Does not each of you on the sabbath untie his ox or his ass from the manger, and lead it away to water it? And ought not this woman, a daughter of Abraham whom Satan bound for eighteen years, be loosed from this bond on the sabbath day?" As he said this, all his adversaries were put to shame; and all the people rejoiced at all the glorious things that were done by him.