Trouble Foments Inside Judas In Spite of Warnings from Jesus 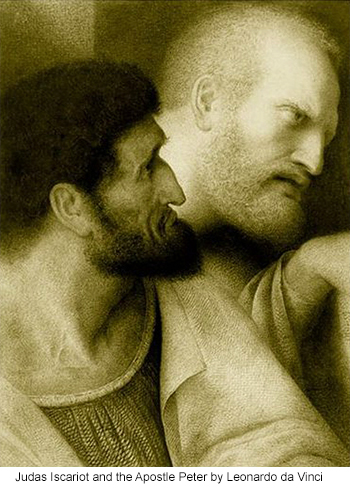 138:5.4 Zebedee and Salome had gone to live with their son David so that their large home could be turned over to Jesus and his twelve apostles. Here Jesus spent a quiet Sabbath with his chosen messengers. It was this same evening that Judas Iscariot took Jesus aside to inquire why nothing was done to get John out of prison. And Judas was not wholly satisfied with Jesus' attitude.

139:6.5 The apostles all loved and respected Nathaniel, and he got along with them splendidly, excepting Judas Iscariot. Judas did not think Nathaniel took his apostleship sufficiently seriously and once had the temerity to go secretly to Jesus and lodge complaint against him. Said Jesus: "Judas, watch carefully your steps; do not overmagnify your office. Who of us is competent to judge his brother? It is not the Father's will that his children should partake only of the serious things of life. Let me repeat: I have come that my brethren in the flesh may have joy, gladness, and life more abundantly. Go then, Judas, and do well that which has been intrusted to you but leave Nathaniel, your brother, to give account of himself to God." And the memory of this, with that of many similar experiences, long lived in the self-deceiving heart of Judas Iscariot

139:12.4 There was no special trait about Jesus which Judas admired above the generally attractive and exquisitely charming personality of the Master. Judas was never able to rise above his Judean prejudices against his Galilean associates; he would even criticize in his mind many things about Jesus. Him whom eleven of the apostles looked upon as the perfect man, as the "one altogether lovely and the chiefest among ten thousand," this self-satisfied Judean often dared to criticize in his own heart. He really entertained the notion that Jesus was timid and somewhat afraid to assert his own power and authority.

139:12.9 Judas became increasingly a brooder over personal disappointment, and finally he became a victim of resentment. His feelings had been many times hurt, and he grew abnormally suspicious of his best friends, even of the Master. Presently he became obsessed with the idea of getting even, anything to avenge himself, yes, even betrayal of his associates and his Master.

139:12.10 But these wicked and dangerous ideas did not take definite shape until the day when a grateful woman broke an expensive box of incense at Jesus' feet. This seemed wasteful to Judas, and when his public protest was so sweepingly disallowed by Jesus right there in the hearing of all, it was too much. That event determined the mobilization of all the accumulated hate, hurt, malice, prejudice, jealousy, and revenge of a lifetime, and he made up his mind to get even with he knew not whom; but he crystallized all the evil of his nature upon the one innocent person in all the sordid drama of his unfortunate life just because Jesus happened to be the chief actor in the episode which marked his passing from the progressive kingdom of light into that self-chosen domain of darkness.

139:12.11 The Master many times, both privately and publicly, had warned Judas that he was slipping, but divine warnings are usually useless in dealing with embittered human nature. Jesus did everything possible, consistent with man's moral freedom, to prevent Judas's choosing to go the wrong way. The great test finally came. The son of resentment failed; he yielded to the sour and sordid dictates of a proud and vengeful mind of exaggerated self-importance and swiftly plunged on down into confusion, despair, and depravity.

139:12.12 Judas then entered into the base and shameful intrigue to betray his Lord and Master and quickly carried the nefarious scheme into effect. During the outworking of his anger-conceived plans of traitorous betrayal, he experienced moments of regret and shame, and in these lucid intervals he faint-heartedly conceived, as a defense in his own mind, the idea that Jesus might possibly exert his power and deliver himself at the last moment.

153:0.2 Not in months had they seen the Master so preoccupied and uncommunicative...Judas Iscariot dared to indulge the thought that possibly Jesus was oppressed with regrets that "he did not have the courage and daring to permit the five thousand to proclaim him king of the Jews."

157:7.2 Judas had been shocked by the death of John the Baptist, severely hurt by the Master's rebukes on several occasions, disappointed when Jesus refused to be made king, humiliated when he fled from the Pharisees, chagrined when he refused to accept the challenge of the Pharisees for a sign, bewildered by the refusal of his Master to resort to manifestations of power, and now, more recently, depressed ...

157:7.4 Being from Judea, Judas took personal offense at Jesus' recent warning to the apostles to "beware the leaven of the Pharisees"; he was disposed to regard this statement as a veiled reference to himself. But the great mistake of Judas was: Time and again, when Jesus would send his apostles off by themselves to pray, Judas, instead of engaging in sincere communion with the spiritual forces of the universe, indulged in thoughts of human fear while he persisted in the entertainment of subtle doubts about the mission of Jesus as well as giving in to his unfortunate tendency to harbor feelings of revenge.

177:4.11 Judas did not realize it at this time, but he had been a subconscious critic of Jesus ever since John the Baptist was beheaded by Herod. Deep down in his heart Judas always resented the fact that Jesus did not save John. You should not forget that Judas had been a disciple of John before he became a follower of Jesus. And all these accumulations of human resentment and bitter disappointment which Judas had laid by in his soul in habiliments of hate were now well organized in his subconscious mind and ready to spring up to engulf him when he once dared to separate himself from the supporting influence of his brethren while at the same time exposing himself to the clever insinuations and subtle ridicule of the enemies of Jesus. Every time Judas allowed his hopes to soar high and Jesus would do or say something to dash them to pieces, there was always left in Judas's heart a scar of bitter resentment; and as these scars multiplied, presently that heart, so often wounded, lost all real affection for the one who had inflicted this distasteful experience upon a well-intentioned but cowardly and self-centered personality. Judas did not realize it, but he was a coward. Accordingly was he always inclined to assign to Jesus cowardice as the motive which led him so often to refuse to grasp for power or glory when they were apparently within his easy reach. And every mortal man knows full well how love, even when once genuine, can, through disappointment, jealousy, and long-continued resentment, be eventually turned into actual hate.

172:5.12 As this vengeful apostle looked upon the proceedings of this Sunday afternoon, Jesus seemed to him more to resemble a clown than a king. He heartily resented the whole performance. He shared the views of the Greeks and Romans, who looked down upon anyone who would consent to ride upon an ass or the colt of an ass. By the time the triumphal procession had entered the city, Judas had about made up his mind to abandon the whole idea of such a kingdom; he was almost resolved to forsake all such farcical attempts to establish the kingdom of heaven. And then he thought of the resurrection of Lazarus, and many other things, and decided to stay on with the twelve, at least for another day. Besides, he carried the bag, and he would not desert with the apostolic funds in his possession. On the way back to Bethany that night his conduct did not seem strange since all of the apostles were equally downcast and silent.

172:5.13 Judas was tremendously influenced by the ridicule of his Sadducean friends. No other single factor exerted such a powerful influence on him, in his final determination to forsake Jesus and his fellow apostles, as a certain episode which occurred just as Jesus reached the gate of the city: A prominent Sadducee (a friend of Judas's family) rushed up to him in a spirit of gleeful ridicule and, slapping him on the back, said: "Why so troubled of countenance, my good friend; cheer up and join us all while we acclaim this Jesus of Nazareth the king of the Jews as he rides through the gates of Jerusalem seated on an ass." Judas had never shrunk from persecution, but he could not stand this sort of ridicule. With the long-nourished emotion of revenge there was now blended this fatal fear of ridicule, that terrible and fearful feeling of being ashamed of his Master and his fellow apostles. At heart, this ordained ambassador of the kingdom was already a deserter; it only remained for him to find some plausible excuse for an open break with the Master.

174:0.2 This morning [Jesus] greeted each of the twelve...to Judas Iscariot he said: "Judas, I have loved you and have prayed that you would love your brethren. Be not weary in well doing; and I would warn you to beware the slippery paths of flattery and the poison darts of ridicule."

177:4.3 Judas could not endure the humiliating thought of being identified with a movement of defeat. He refused to entertain the idea of apparent failure.