The Beginnng Of The End For Judas - Humiliation And Remorse 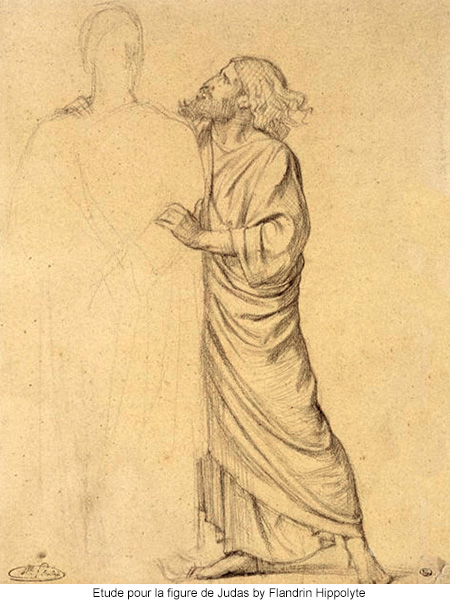 183:5.2 Judas marched along near the captains, overhearing all that was said, but took no part in the dispute, for neither the Jewish captain nor the Roman officer would so much as speak to the betrayer-they held him in such contempt.

184:3.6 The Jewish law required that at least two witnesses must agree upon any point before a charge could be laid against the prisoner. Judas could not be used as a witness against Jesus because the Jewish law specifically forbade the testimony of a traitor.

186:1.1 It was about half past eight o'clock this Friday morning when the hearing of Jesus before Pilate was ended and the Master was placed in the custody of the Roman soldiers who were to crucify him. As Caiaphas was engaged in making his report to the Sanhedrin regarding the trial and condemnation of Jesus, Judas appeared before them to claim his reward for the part he had played in his Master's arrest and sentence of death.

186:1.2 All of these Jews loathed Judas; they looked upon the betrayer with only feelings of utter contempt. Throughout the trial of Jesus before Caiaphas and during his appearance before Pilate, Judas was pricked in his conscience about his traitorous conduct. And he was also beginning to become somewhat disillusioned regarding the reward he was to receive as payment for his services as Jesus' betrayer. He did not like the coolness and aloofness of the Jewish authorities; nevertheless, he expected to be liberally rewarded for his cowardly conduct. He anticipated being called before the full meeting of the Sanhedrin and there hearing himself eulogized while they conferred upon him suitable honors in token of the great service which he flattered himself he had rendered his nation. Imagine, therefore, the great surprise of this egotistic traitor when a servant of the high priest, tapping him on the shoulder, called him just outside the hall and said: "Judas, I have been appointed to pay you for the betrayal of Jesus. Here is your reward." And thus speaking, the servant of Caiaphas handed Judas a bag containing thirty pieces of silver-the current price of a good, healthy slave.