Home Jesus Apostles Judas Iscariot Judas Plots The Betrayal Of Jesus, Justifying It In His Own Mind

Judas Plots The Betrayal Of Jesus, Justifying It In His Own Mind 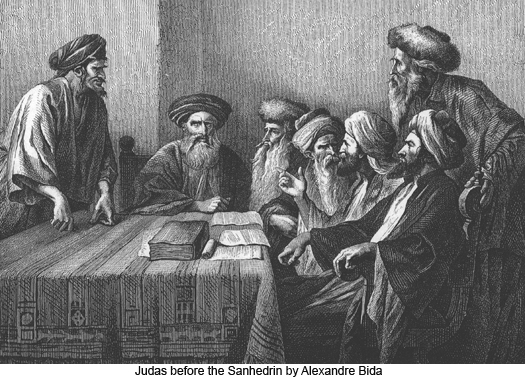 177:4.1 This confused and discontented apostle, notwithstanding his Master's specific request to refrain from entering Jerusalem, went in haste to keep his appointment with Jesus' enemies at the home of Caiaphas the high priest. This meeting was called to discuss the nature of the charges which should be lodged against Jesus and to decide upon the procedure to be employed in bringing him before the Roman authorities for the purpose of securing the necessary civil confirmation of the death sentence which they had already passed upon him.

177:4.2 On the preceding day Judas had disclosed to some of his relatives and to certain Sadducean friends of his father's family that he had reached the conclusion that, while Jesus was a well-meaning dreamer and idealist, he was not the expected deliverer of Israel. Judas stated that he would very much like to find some way of withdrawing gracefully from the whole movement. His friends flatteringly assured him that his withdrawal would be hailed by the Jewish rulers as a great event, and that nothing would be too good for him. They led him to believe that he would forthwith receive high honors from the Sanhedrin, and that he would at last be in a position to erase the stigma of his well-meant but "unfortunate association with untaught Galileans."

177:4.3 Judas could not quite believe that the mighty works of the Master had been wrought by the power of the prince of devils, but he was now fully convinced that Jesus would not exert his power in self-aggrandizement; he was at last convinced that Jesus would allow himself to be destroyed by the Jewish rulers, and he could not endure the humiliating thought of being identified with a movement of defeat. He refused to entertain the idea of apparent failure. He thoroughly understood the sturdy character of his Master and the keenness of that majestic and merciful mind, yet he derived pleasure from even the partial entertainment of the suggestion of one of his relatives that Jesus, while he was a well-meaning fanatic, was probably not really sound of mind; that he had always appeared to be a strange and misunderstood person.

177:4.4 And now, as never before, Judas found himself becoming strangely resentful that Jesus had never assigned him a position of greater honor. All along he had appreciated the honor of being the apostolic treasurer, but now he began to feel that he was not appreciated; that his abilities were unrecognized. He was suddenly overcome with indignation that Peter, James, and John should have been honored with close association with Jesus, and at this time, when he was on the way to the high priest's home, he was bent on getting even with Peter, James, and John more than he was concerned with any thought of betraying Jesus. But over and above all, just then, a new and dominating thought began to occupy the forefront of his conscious mind: He had set out to get honor for himself, and if this could be secured simultaneously with getting even with those who had contributed to the greatest disappointment of his life, all the better. He was seized with a terrible conspiracy of confusion, pride, desperation, and determination. And so it must be plain that it was not for money that Judas was then on his way to the home of Caiaphas to arrange for the betrayal of Jesus.

177:4.5 As Judas approached the home of Caiaphas, he arrived at the final decision to abandon Jesus and his fellow apostles; and having thus made up his mind to desert the cause of the kingdom of heaven, he was determined to secure for himself as much as possible of that honor and glory which he had thought would sometime be his when he first identified himself with Jesus and the new gospel of the kingdom. All of the apostles once shared this ambition with Judas, but as time passed they learned to admire truth and to love Jesus, at least more than did Judas.

177:4.6 The traitor was presented to Caiaphas and the Jewish rulers by his cousin, who explained that Judas, having discovered his mistake in allowing himself to be misled by the subtle teaching of Jesus, had arrived at the place where he wished to make public and formal renunciation of his association with the Galilean and at the same time to ask for reinstatement in the confidence and fellowship of his Judean brethren. This spokesman for Judas went on to explain that Judas recognized it would be best for the peace of Israel if Jesus should be taken into custody, and that, as evidence of his sorrow in having participated in such a movement of error and as proof of his sincerity in now returning to the teachings of Moses, he had come to offer himself to the Sanhedrin as one who could so arrange with the captain holding the orders for Jesus' arrest that he could be taken into custody quietly, thus avoiding any danger of stirring up the multitudes or the necessity of postponing his arrest until after the Passover.

177:4.7 When his cousin had finished speaking, he presented Judas, who, stepping forward near the high priest, said: "All that my cousin has promised, I will do, but what are you willing to give me for this service?" Judas did not seem to discern the look of disdain and even disgust that came over the face of the hardhearted and vainglorious Caiaphas; his heart was too much set on self-glory and the craving for the satisfaction of self-exaltation.