Who Was Judas Iscariot? His Selection and Duties As An Apostle 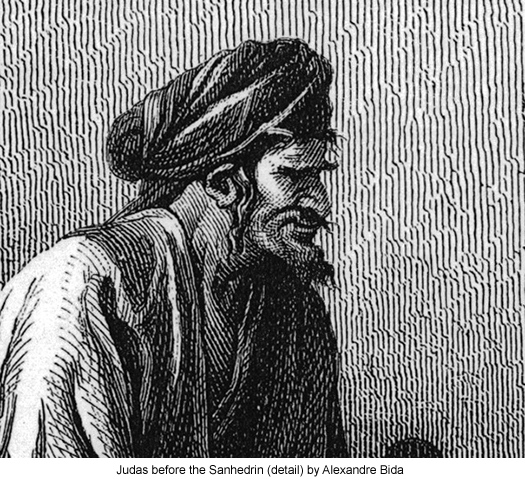 138:2.9 6. Judas Iscariot was an only son of wealthy Jewish parents living in Jericho. He had become attached to John the Baptist, and his Sadducee parents had disowned him. He was looking for employment in these regions when Jesus' apostles found him, and chiefly because of his experience with finances, Nathaniel invited him to join their ranks. Judas Iscariot was the only Judean among the twelve apostles.

139:12.1 Judas Iscariot, the twelfth apostle, was chosen by Nathaniel. He was born in Kerioth, a small town in southern Judea. When he was a lad, his parents moved to Jericho, where he lived and had been employed in his father's various business enterprises until he became interested in the preaching and work of John the Baptist.

139:12.2 When Nathaniel met Judas at Tarichea, he was seeking employment with a fish-drying enterprise at the lower end of the Sea of Galilee. He was thirty years of age and unmarried when he joined the apostles. He was probably the best-educated man among the twelve and the only Judean in the Master's apostolic family. Judas had no outstanding trait of personal strength, though he had many outwardly appearing traits of culture and habits of training. He was a good thinker but not always a truly honest thinker. Judas did not really understand himself; he was not really sincere in dealing with himself.

139:12.5 Judas was a good business man. It required tact, ability, and patience, as well as painstaking devotion, to manage the financial affairs of such an idealist as Jesus, to say nothing of wrestling with the helter-skelter business methods of some of his apostles. Judas really was a great executive, a farseeing and able financier. And he was a stickler for organization. None of the twelve ever criticized Judas. As far as they could see, Judas Iscariot was a matchless treasurer, a learned man, a loyal (though sometimes critical) apostle, and in every sense of the word a great success. The apostles loved Judas; he was really one of them. He must have believed in Jesus, but we doubt whether he really loved the Master with a whole heart. The case of Judas illustrates the truthfulness of that saying: "There is a way that seems right to a man, but the end thereof is death." It is altogether possible to fall victim to the peaceful deception of pleasant adjustment to the paths of sin and death. Be assured that Judas was always financially loyal to his Master and his fellow apostles. Money could never have been the motive for his betrayal of the Master.

139:12.6 Judas was an only son of unwise parents. When very young, he was pampered and petted; he was a spoiled child. As he grew up, he had exaggerated ideas about his self-importance. He was a poor loser. He had loose and distorted ideas about fairness; he was given to the indulgence of hate and suspicion. He was an expert at misinterpretation of the words and acts of his friends. All through his life Judas had cultivated the habit of getting even with those whom he fancied had mistreated him. His sense of values and loyalties was defective.

138:5.1 Judas the wanderer met Jesus and the apostles at the fisher-boat landing at Tarichea, and Thomas led the party to his near-by home. Nathaniel presented Judas Iscariot, the Judean,as his nominee for apostleship and for similar honors. To Judas Iscariot the Master said: "Judas, we are all of one flesh, and as I receive you into our midst, I pray that you will always be loyal to your Galilean brethren. Follow me."

138:10.10 9. Judas Iscariot was appointed treasurer. He carried the bag. He paid all expenses and kept the books. He made budget estimates for Matthew from week to week and also made weekly reports to Andrew. Judas paid out funds on Andrew's authorization.

139:12.3 Andrew appointed Judas treasurer of the twelve, a position which he was eminently fitted to hold, and up to the time of the betrayal of his Master he discharged the responsibilities of his office honestly, faithfully, and most efficiently.

163:2.11 When the apostolic treasury was overflowing, Judas put funds on deposit to be used subsequently when they might suffer greatly from a diminution of income.