Judas Is Promised A Fee For His Betrayal, Suiting His Selfish Ambition 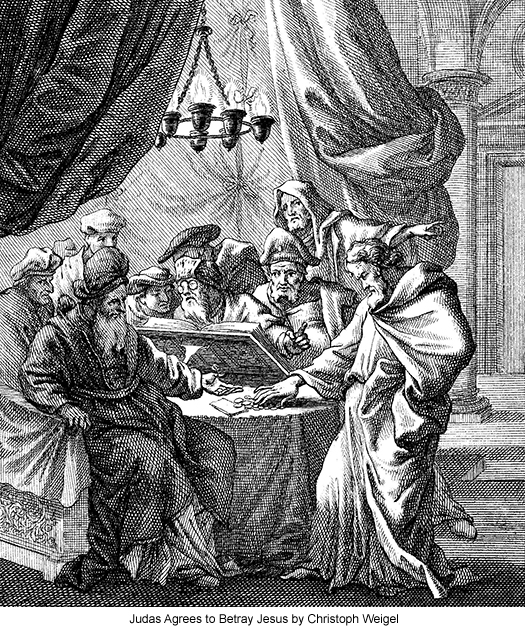 177:4.8 And then Caiaphas looked down upon the betrayer while he said: "Judas, you go to the captain of the guard and arrange with that officer to bring your Master to us either tonight or tomorrow night, and when he has been delivered by you into our hands, you shall receive your reward for this service." When Judas heard this, he went forth from the presence of the chief priests and rulers and took counsel with the captain of the temple guards as to the manner in which Jesus was to be apprehended. Judas knew that Jesus was then absent from the camp and had no idea when he would return that evening, and so they agreed among themselves to arrest Jesus the next evening (Thursday) after the people of Jerusalem and all of the visiting pilgrims had retired for the night.

177:4.12 At last the chief priests and elders could breathe easily for a few hours. They would not have to arrest Jesus in public, and the securing of Judas as a traitorous ally insured that Jesus would not escape from their jurisdiction as he had so many times in the past.

177:4.9 Judas returned to his associates at the camp intoxicated with thoughts of grandeur and glory such as he had not had for many a day. He had enlisted with Jesus hoping some day to become a great man in the new kingdom. He at last realized that there was to be no new kingdom such as he had anticipated. But he rejoiced in being so sagacious as to trade off his disappointment in failing to achieve glory in an anticipated new kingdom for the immediate realization of honor and reward in the old order, which he now believed would survive, and which he was certain would destroy Jesus and all that he stood for. In its last motive of conscious intention, Judas's betrayal of Jesus was the cowardly act of a selfish deserter whose only thought was his own safety and glorification, no matter what might be the results of his conduct upon his Master and upon his former associates

177:4.10 But it was ever just that way. Judas had long been engaged in this deliberate, persistent, selfish, and vengeful consciousness of progressively building up in his mind, and entertaining in his heart, these hateful and evil desires of revenge and disloyalty. Jesus loved and trusted Judas even as he loved and trusted the other apostles, but Judas failed to develop loyal trust and to experience wholehearted love in return. And how dangerous ambition can become when it is once wholly wedded to self-seeking and supremely motivated by sullen and long-suppressed vengeance! What a crushing thing is disappointment in the lives of those foolish persons whom, in fastening their gaze on the shadowy and evanescent allurements of time, become blinded to the higher and more real achievements of the everlasting attainments of the eternal worlds of divine values and true spiritual realities. Judas craved worldly honor in his mind and grew to love this desire with his whole heart; the other apostles likewise craved this same worldly honor in their minds, but with their hearts they loved Jesus and were doing their best to learn to love the truths which he taught them.