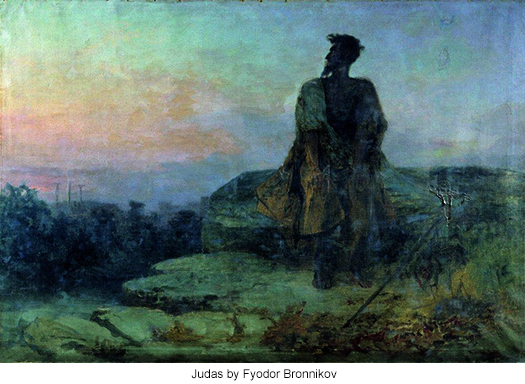 193:4.1 It was in the first part of the Master's farewell message to his apostles that he alluded to the loss of Judas and held up the tragic fate of their traitorous fellow worker as a solemn warning against the dangers of social and fraternal isolation. It may be helpful to believers, in this and in future ages, briefly to review the causes of Judas's downfall in the light of the Master's remarks and in view of the accumulated enlightenment of succeeding centuries.

193:4.2 As we look back upon this tragedy, we conceive that Judas went wrong, primarily, because he was very markedly an isolated personality, a personality shut in and away from ordinary social contacts. He persistently refused to confide in, or freely fraternize with, his fellow apostles. But his being an isolated type of personality would not, in and of itself, have wrought such mischief for Judas had it not been that he also failed to increase in love and grow in spiritual grace. And then, as if to make a bad matter worse, he persistently harbored grudges and fostered such psychologic enemies as revenge and the generalized craving to "get even" with somebody for all his disappointments.

193:4.3 This unfortunate combination of individual peculiarities and mental tendencies conspired to destroy a well-intentioned man who failed to subdue these evils by love, faith, and trust. That Judas need not have gone wrong is well proved by the cases of Thomas and Nathaniel, both of whom were cursed with this same sort of suspicion and overdevelopment of the individualistic tendency. Even Andrew and Matthew had many leanings in this direction; but all these men grew to love Jesus and their fellow apostles more, and not less, as time passed. They grew in grace and in a knowledge of the truth. They became increasingly more trustful of their brethren and slowly developed the ability to confide in their fellows. Judas persistently refused to confide in his brethren. When he was impelled, by the accumulation of his emotional conflicts, to seek relief in self-expression, he invariably sought the advice and received the unwise consolation of his unspiritual relatives or those chance acquaintances who were either indifferent, or actually hostile, to the welfare and progress of the spiritual realities of the heavenly kingdom, of which he was one of the twelve consecrated ambassadors on earth.

193:4.4 Judas met defeat in his battles of the earth struggle because of the following factors of personal tendencies and character weakness:

193:4.5 1. He was an isolated type of human being. He was highly individualistic and chose to grow into a confirmed "shut-in" and unsociable sort of person.

193:4.6 2. As a child, life had been made too easy for him. He bitterly resented thwarting. He always expected to win; he was a very poor loser.

193:4.7 3. He never acquired a philosophic technique for meeting disappointment. Instead of accepting disappointments as a regular and commonplace feature of human existence, he unfailingly resorted to the practice of blaming someone in particular, or his associates as a group, for all his personal difficulties and disappointments.

193:4.8 4. He was given to holding grudges; he was always entertaining the idea of revenge.

193:4.9 5. He did not like to face facts frankly; he was dishonest in his attitude toward life situations.

193:4.10 6. He disliked to discuss his personal problems with his immediate associates; he refused to talk over his difficulties with his real friends and those who truly loved him. In all the years of their association he never once went to the Master with a purely personal problem.

193:4.11 7. He never learned that the real rewards for noble living are, after all, spiritual prizes, which are not always distributed during this one short life in the flesh.

193:4.12 As a result of his persistent isolation of personality, his griefs multiplied, his sorrows increased, his anxieties augmented, and his despair deepened almost beyond endurance.

193:4.13 While this self-centered and ultraindividualistic apostle had many psychic, emotional, and spiritual troubles, his main difficulties were: In personality, he was isolated. In mind, he was suspicious and vengeful. In temperament, he was surly and vindictive. Emotionally, he was loveless and unforgiving. Socially, he was unconfiding and almost wholly self-contained. In spirit, he became arrogant and selfishly ambitious. In life, he ignored those who loved him, and in death, he was friendless.

193:4.14 These, then, are the factors of mind and influences of evil which, taken altogether, explain why a well-meaning and otherwise onetime sincere believer in Jesus, even after several years of intimate association with his transforming personality, forsook his fellows, repudiated a sacred cause, renounced his holy calling, and betrayed his divine Master.