The Unnamed Woman At Simon The Pharisee's 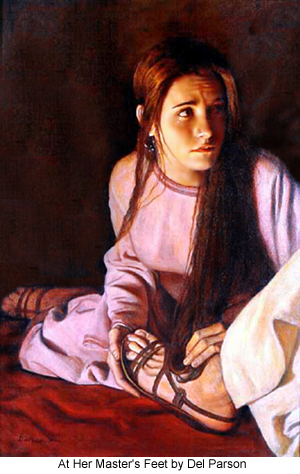 147:5.3 On this particular occasion at Simon's house, among those who came in off the street was a woman of unsavory reputation who had recently become a believer in the good news of the gospel of the kingdom. This woman was well known throughout all Jerusalem as the former keeper of one of the so-called high-class brothels located hard by the temple court of the gentiles. She had, on accepting the teachings of Jesus, closed up her nefarious place of business and had induced the majority of the women associated with her to accept the gospel and change their mode of living; notwithstanding this, she was still held in great disdain by the Pharisees and was compelled to wear her hair down — the badge of harlotry. This unnamed woman had brought with her a large flask of perfumed anointing lotion and, standing behind Jesus as he reclined at meat, began to anoint his feet while she also wet his feet with her tears of gratitude, wiping them with the hair of her head. And when she had finished this anointing, she continued weeping and kissing his feet.

147:5.4 When Simon saw all this, he said to himself: "This man, if he were a prophet, would have perceived who and what manner of woman this is who thus touches him; that she is a notorious sinner." And Jesus, knowing what was going on in Simon's mind, spoke up, saying: "Simon, I have something which I would like to say to you." Simon answered, "Teacher, say on." Then said Jesus: "A certain wealthy moneylender had two debtors. The one owed him five hundred denarii and the other fifty. Now, when neither of them had wherewith to pay, he forgave them both. Which of them do you think, Simon, would love him most?" Simon answered, "He, I suppose, whom he forgave the most." And Jesus said, "You have rightly judged," and pointing to the woman, he continued: "Simon, take a good look at this woman. I entered your house as an invited guest, yet you gave me no water for my feet. This grateful woman has washed my feet with tears and wiped them with the hair of her head. You gave me no kiss of friendly greeting, but this woman, ever since she came in, has not ceased to kiss my feet. My head with oil you neglected to anoint, but she has anointed my feet with precious lotions. And what is the meaning of all this? Simply that her many sins have been forgiven, and this has led her to love much. But those who have received but little forgiveness sometimes love but little." And turning around toward the woman, he took her by the hand and, lifting her up, said: "You have indeed repented of your sins, and they are forgiven. Be not discouraged by the thoughtless and unkind attitude of your fellows; go on in the joy and liberty of the kingdom of heaven."

147:5.5 When Simon and his friends who sat at meat with him heard these words, they were the more astonished, and they began to whisper among themselves, "Who is this man that he even dares to forgive sins?" And when Jesus heard them thus murmuring, he turned to dismiss the woman, saying, "Woman, go in peace; your faith has saved you."

147:5.6 As Jesus arose with his friends to leave, he turned to Simon and said: "I know your heart, Simon, how you are torn betwixt faith and doubts, how you are distraught by fear and troubled by pride; but I pray for you that you may yield to the light and may experience in your station in life just such mighty transformations of mind and spirit as may be comparable to the tremendous changes which the gospel of the kingdom has already wrought in the heart of your unbidden and unwelcome guest. And I declare to all of you that the Father has opened the doors of the heavenly kingdom to all who have the faith to enter, and no man or association of men can close those doors even to the most humble soul or supposedly most flagrant sinner on earth if such sincerely seek an entrance." And Jesus, with Peter, James, and John, took leave of their host and went to join the rest of the apostles at the camp in the garden of Gethsemane.

147:5.7 That same evening Jesus made the long-to-be-remembered address to the apostles regarding the relative value of status with God and progress in the eternal ascent to Paradise. Said Jesus: "My children, if there exists a true and living connection between the child and the Father, the child is certain to progress continuously toward the Father's ideals. True, the child may at first make slow progress, but the progress is none the less sure. The important thing is not the rapidity of your progress but rather its certainty. Your actual achievement is not so important as the fact that the direction of your progress is Godward. What you are becoming day by day is of infinitely more importance than what you are today..

147:5.8 "This transformed woman whom some of you saw at Simon's house today is, at this moment, living on a level which is vastly below that of Simon and his well-meaning associates; but while these Pharisees are occupied with the false progress of the illusion of traversing deceptive circles of meaningless ceremonial services, this woman has, in dead earnest, started out on the long and eventful search for God, and her path toward heaven is not blocked by spiritual pride and moral self-satisfaction. The woman is, humanly speaking, much farther away from God than Simon, but her soul is in progressive motion; she is on the way toward an eternal goal. There are present in this woman tremendous spiritual possibilities for the future. Some of you may not stand high in actual levels of soul and spirit, but you are making daily progress on the living way opened up, through faith, to God. There are tremendous possibilities in each of you for the future. Better by far to have a small but living and growing faith than to be possessed of a great intellect with its dead stores of worldly wisdom and spiritual unbelief."

147:5.9 But Jesus earnestly warned his apostles against the foolishness of the child of God who presumes upon the Father's love. He declared that the heavenly Father is not a lax, loose, or foolishly indulgent parent who is ever ready to condone sin and forgive recklessness. He cautioned his hearers not mistakenly to apply his illustrations of father and son so as to make it appear that God is like some overindulgent and unwise parents who conspire with the foolish of earth to encompass the moral undoing of their thoughtless children, and who are thereby certainly and directly contributing to the delinquency and early demoralization of their own offspring. Said Jesus: "My Father does not indulgently condone those acts and practices of his children which are self-destructive and suicidal to all moral growth and spiritual progress. Such sinful practices are an abomination in the sight of God."

Luke 7: 36-50 One of the Pharisees asked him to eat with him, and he went into the Pharisee's house, and took his place at table. And behold, a woman of the city, who was a sinner, when she learned that he was at table in the Pharisee's house, brought an alabaster flask of ointment, and standing behind him at his feet, weeping, she began to wet his feet with her tears, and wiped them with the hair of her head, and kissed his feet, and anointed them with the ointment.

39 Now when the Pharisee who had invited him saw it, he said to himself, "If this man were a prophet, he would have known who and what sort of woman this is who is touching him, for she is a sinner." And Jesus answering said to him, "Simon, I have something to say to you." And he answered, "What is it, Teacher?" "A certain creditor had two debtors; one owed five hundred denarii, and the other fifty. When they could not pay, he forgave them both. Now which of them will love him more?" Simon answered, "The one, I suppose, to whom he forgave more." And he said to him, "You have judged rightly." Then turning toward the woman he said to Simon, "Do you see this woman? I entered your house, you gave me no water for my feet, but she has wet my feet with her tears and wiped them with her hair. You gave me no kiss, but from the time I came in she has not ceased to kiss my feet. You did not anoint my head with oil, but she has anointed my feet with ointment. Therefore I tell you, her sins, which are many, are forgiven, for she loved much; but he who is forgiven little, loves little." And he said to her, "Your sins are forgiven." Then those who were at table with him began to say among themselves, "Who is this, who even forgives sins?" And he said to the woman, "Your faith has saved you; go in peace."