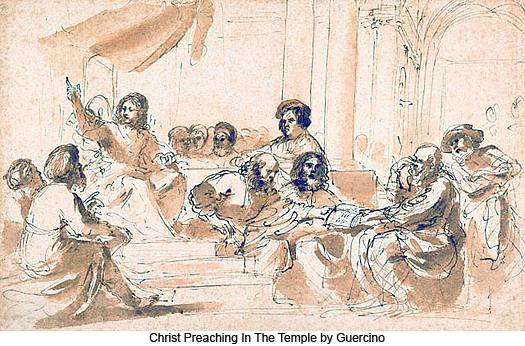 129:1.7 Throughout this year Jesus built boats and continued to observe how men lived on earth. Frequently he would go down to visit at the caravan station, Capernaum being on the direct travel route from Damascus to the south. Capernaum was a strong Roman military post, and the garrison's commanding officer was a gentile believer in Yahweh," a devout man," as the Jews were wont to designate such proselytes. This officer belonged to a wealthy Roman family, and he took it upon himself to build a beautiful synagogue in Capernaum, which had been presented to the Jews a short time before Jesus came to live with Zebedee. Jesus conducted the services in this new synagogue more than half the time this year, and some of the caravan people who chanced to attend remembered him as the carpenter from Nazareth.

129:1.8 When it came to the payment of taxes, Jesus registered himself as a "skilled craftsman of Capernaum." From this day on to the end of his earth life he was known as a resident of Capernaum. He never claimed any other legal residence, although he did, for various reasons, permit others to assign his residence to Damascus, Bethany Nazareth, and even Alexandria. 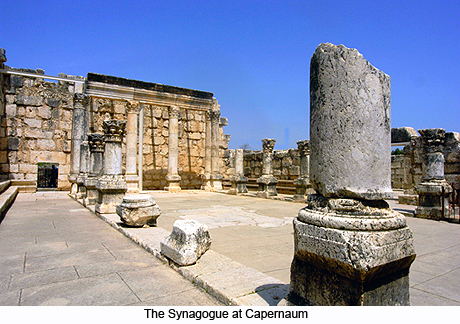 129:1.9 At the Capernaum synagogue he found many new books in the library chests, and he spent at least five evenings a week at intense study. One evening he devoted to social life with the older folks, and one evening he spent with the young people. There was something gracious and inspiring about the personality of Jesus which invariably attracted young people. He always made them feel at ease in his presence. Perhaps his great secret in getting along with them consisted in the twofold fact that he was always interested in what they were doing, while he seldom offered them advice unless they asked for it.

129:1.10 The Zebedee family almost worshiped Jesus, and they never failed to attend the conferences of questions and answers which he conducted each evening after supper before he departed for the synagogue to study. The youthful neighbors also came in frequently to attend these after-supper meetings. To these little gatherings Jesus gave varied and advanced instruction, just as advanced as they could comprehend. He talked quite freely with them, expressing his ideas and ideals about politics, sociology, science, and philosophy, but never presumed to speak with authoritative finality except when discussing religion —the relation of man to God.

129:1.11 Once a week Jesus held a meeting with the entire household, shop, and shore helpers, for Zebedee had many employees. And it was among these workers that Jesus was first called "the Master." They all loved him. He enjoyed his labors with Zebedee in Capernaum, but he missed the children playing out by the side of the Nazareth carpenter shop.

129:1.12 Of the sons of Zebedee, James was the most interested in Jesus as a teacher, as a philosopher. John cared most for his religious teaching and opinions. David respected him as a mechanic but took little stock in his religious views and philosophic teachings.

129:1.13 Frequently Jude came over on the Sabbath to hear Jesus talk in the synagogue and would tarry to visit with him. And the more Jude saw of his eldest brother, the more he became convinced that Jesus was a truly great man.