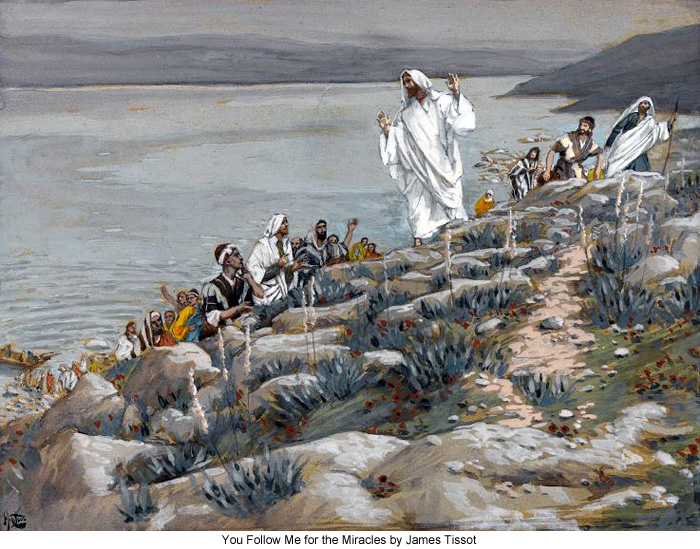 152:3.1 The feeding of the five thousand by supernatural energy was another of those cases where human pity plus creative power equaled that which happened. Now that the multitude had been fed to the full, and since Jesus' fame was then and there augmented by this stupendous wonder, the project to seize the Master and proclaim him king required no further personal direction. The idea seemed to spread through the crowd like a contagion. The reaction of the multitude to this sudden and spectacular supplying of their physical needs was profound and overwhelming. For a long time the Jew had been taught that the Messiah, the son of David, when he should come, would cause the land again to flow with milk and honey, and that the bread of life would be bestowed upon them as manna from heaven was supposed to have fallen upon their forefathers in the wilderness. And was not all of this expectation now fulfilled right before their eyes? When this hungry, undernourished multitude had finished gorging itself with the wonder-food, there was but one unanimous reaction: "Here is our king." The wonder-working deliverer of Israel had come. In the eyes of these simple-minded people the power to feed carried with it the right to rule. No wonder, then, that the multitude, when it had finished feasting, rose as one man and shouted, "Make him king!"

152:3.2 This mighty shout enthused Peter and those of the apostles who still retained the hope of seeing Jesus assert his right to rule. But these false hopes were not to live for long. This mighty shout of the multitude had hardly ceased to reverberate from the near-by rocks when Jesus stepped upon a huge stone and, lifting up his right hand to command their attention, said: "My children, you mean well, but you are shortsighted and material-minded."There was a brief pause; this stalwart Galilean was there majestically posed in the enchanting glow of that eastern twilight. Every inch he looked a king as he continued to speak to this breathless multitude: "You would make me king, not because your souls have been lighted with a great truth, but because your stomachs have been filled with bread. How many times have I told you that my kingdom is not of this world? This kingdom of heaven which we proclaim is a spiritual brotherhood, and no man rules over it seated upon a material throne. My Father in heaven is the all-wise and the all-powerful Ruler over this spiritual brotherhood of the sons of God on earth. Have I so failed in revealing to you the Father of spirits that you would make a king of his Son in the flesh! Now all of you go hence to your own homes. If you must have a king, let the Father of lights be enthroned in the heart of each of you as the spirit Ruler of all things."

152:3.3 These words of Jesus sent the multitude away stunned and disheartened. Many who had believed in him turned back and followed him no more from that day. The apostles were speechless; they stood in silence gathered about the twelve baskets of the fragments of food; only the chore boy, the Mark lad, spoke, "And he refused to be our king." Jesus, before going off to be alone in the hills, turned to Andrew and said: "Take your brethren back to Zebedee's house and pray with them, especially for your brother, Simon Peter. "

152:5.6 The news of the feeding of the five thousand and the attempt to make Jesus king aroused widespread curiosity and stirred up the fears of both the religious leaders and the civil rulers throughout all Galilee and Judea. While this great miracle did nothing to further the gospel of the kingdom in the souls of material-minded and halfhearted believers, it did serve the purpose of bringing to a head the miracle-seeking and king-craving proclivities of Jesus' immediate family of apostles and close disciples. This spectacular episode brought an end to the early era of teaching, training, and healing, thereby preparing the way for the inauguration of this last year of proclaiming the higher and more spiritual phases of the new gospel of the kingdom—divine sonship, spiritual liberty, and eternal salvation.