The Jewish Women Lament For Jesus 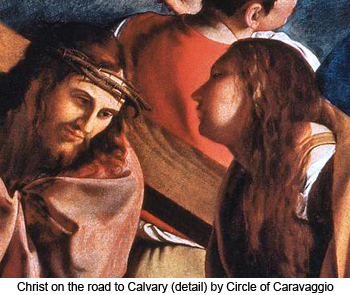 187:1.4 Ordinarily, it was the custom to journey to Golgotha by the longest road in order that a large number of persons might view the condemned criminal, but on this day they went by the most direct route to the Damascus gate, which led out of the city to the north, and following this road, they soon arrived at Golgotha, the official crucifixion site of Jerusalem. Beyond Golgotha were the villas of the wealthy, and on the other side of the road were the tombs of many well-to-do Jews.

187:1.5 Crucifixion was not a Jewish mode of punishment. Both the Greek and the Romans learned this method of execution from the Phoenicians. Even Herod, with all his cruelty, did not resort to crucifixion. The Romans never crucified a Roman citizen; only slaves and subject peoples were subjected to this dishonorable mode of death. During the siege of Jerusalem, just forty years after the crucifixion of Jesus, all of Golgotha was covered by thousands upon thousands of crosses upon which, from day to day, there perished the flower of the Jewish race. A terrible harvest, indeed, of the seed-sowing of this day.

187:1.6 As the death procession passed along the narrow streets of Jerusalem, many of the tenderhearted Jewish women who had heard Jesus' words of good cheer and compassion, and who knew of his life of loving ministry, could not refrain from weeping when they saw him being led forth to such an ignoble death. As he passed by, many of these women bewailed and lamented. And when some of them even dared to follow along by his side, the Master turned his head toward them and said: "Daughters of Jerusalem, weep not for me, but rather weep for yourselves and for your children. My work is about done—soon I go to my Father—but the times of terrible trouble for Jerusalem are just beginning. Behold, the days are coming in which you shall say: Blessed are the barren and those whose breasts have never suckled their young. In those days will you pray the rocks of the hills to fall on you in order that you may be delivered from the terrors of your troubles."

187:1.7 These women of Jerusalem were indeed courageous to manifest sympathy for Jesus, for it was strictly against the law to show friendly feelings for one who was being led forth to crucifixion. It was permitted the rabble to jeer, mock, and ridicule the condemned, but it was not allowed that any sympathy should be expressed. Though Jesus appreciated the manifestation of sympathy in this dark hour when his friends were in hiding, he did not want these kindhearted women to incur the displeasure of the authorities by daring to show compassion in his behalf. Even at such a time as this Jesus thought little about himself, only of the terrible days of tragedy ahead for Jerusalem and the whole Jewish nation.