The Mediterranean Trip - The Human Jesus 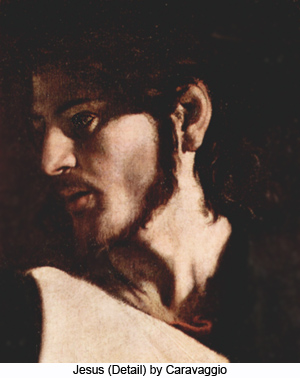 129:4.1 To the onlooking celestial intelligences of the local universe, this Mediterranean trip was the most enthralling of all Jesus' earth experiences, at least of all his career right up to the event of his crucifixion and mortal death. This was the fascinating period of his personal ministry in contrast with the soon-following epoch of public ministry. This unique episode was all the more engrossing because he was at this time still the carpenter of Nazareth, the boatbuilder of Capernaum, the scribe of Damascus; he was still the Son of Man. He had not yet achieved the complete mastery of his human mind; the Adjuster had not fully mastered and counterparted the mortal identity. He was still a man among men.

129:4.2 The purely human religious experience—the personal spiritual growth—of the Son of Man well-nigh reached the apex of attainment during this, the twenty-ninth year. This experience of spiritual development was a consistently gradual growth from the moment of the arrival of his Thought Adjuster until the day of the completion and confirmation of that natural and normal human relationship between the material mind of man and the mind-endowment of the spirit—the phenomenon of the making of these two minds one, the experience which the Son of Man attained in completion and finality, as an incarnated mortal of the realm, on the day of his baptism in the Jordan.

129:4.3 Throughout these years, while he did not appear to engage in so many seasons of formal communion with his Father in heaven, he perfected increasingly effective methods of personal communication with the indwelling spirit presence of the Paradise Father. He lived a real life, a full life, and a truly normal, natural, and average life in the flesh. He knows from personal experience the equivalent of the actuality of the entire sum and substance of the living of the life of human beings on the material worlds of time and space.

129:4.4 The Son of Man experienced those wide ranges of human emotion which reach from superb joy to profound sorrow. He was a child of joy and a being of rare good humor; likewise was he a "man of sorrows and acquainted with grief." In a spiritual sense, he did live through the mortal life from the bottom to the top, from the beginning to the end. From a material point of view, he might appear to have escaped living through both social extremes of human existence, but intellectually he became wholly familiar with the entire and complete experience of humankind.

129:4.5 Jesus knows about the thoughts and feelings, the urges and impulses, of the evolutionary and ascendant mortals of the realms, from birth to death. He has lived the human life from the beginnings of physical, intellectual, and spiritual selfhood up through infancy, childhood, youth, and adulthood—even to the human experience of death. He not only passed through these usual and familiar human periods of intellectual and spiritual advancement, but he also fully experienced those higher and more advanced phases of human and Adjuster reconciliation which so few Urantia mortals ever attain. And thus he experienced the full life of mortal man, not only as it is lived on your world, but also as it is lived on all other evolutionary worlds of time and space, even on the highest and most advanced of all the worlds settled in light and life.

129:4.6 Although this perfect life which he lived in the likeness of mortal flesh may not have received the unqualified and universal approval of his fellow mortals, those who chanced to be his contemporaries on earth, still, the life which Jesus of Nazareth lived in the flesh and on Urantia did receive full and unqualified acceptance by the Universal Father as constituting at one and the same time, and in one and the same personality -life, the fullness of the revelation of the eternal God to mortal man and the presentation of perfected human personality to the satisfaction of the Infinite Creator.

129:4.7 And this was his true and supreme purpose. He did not come down to live on Urantia as the perfect and detailed example for any child or adult, any man or woman, in that age or any other. True it is, indeed, that in his full, rich, beautiful, and noble life we may all find much that is exquisitely exemplary, divinely inspiring, but this is because he lived a true and genuinely human life. Jesus did not live his life on earth in order to set an example for all other human beings to copy. He lived this life in the flesh by the same mercy ministry that you all may live your lives on earth; and as he lived his mortal life in his day and as he was, so did he thereby set the example for all of us thus to live our lives in our day and as we are. You may not aspire to live his life, but you can resolve to live your lives even as, and by the same means that, he lived his. Jesus may not be the technical and detailed example for all the mortals of all ages on all the realms of this local universe, but he is everlastingly the inspiration and guide of all Paradise pilgrims from the worlds of initial ascension up through a universe of universes and on through Havona to Paradise. Jesus is the new and living way from man to God, from the partial to the perfect, from the earthly to the heavenly, from time to eternity.

129:4.8 By the end of the twenty-ninth year Jesus of Nazareth had virtually finished the living of the life required of mortals as sojourners in the flesh. He came on earth the fullness of God to be manifest to man; he had now become well-nigh the perfection of man awaiting the occasion to become manifest to God. And he did all of this before he was thirty years of age.