Simon And Jesus Make A Memorable Trip To Jerusalem (Age 23)

128:3.1 This year the financial pressure was slightly relaxed as four were at work. Miriam earned considerable by the sale of milk and butter; Martha had become an expert weaver. The purchase price of the repair shop was over one third paid. The situation was such that Jesus stopped work for three weeks to take Simon to Jerusalem for the Passover, and this was the longest period away from daily toil he had enjoyed since the death of his father.

128:3.2 They journeyed to Jerusalem by way of the Decapolis and through Pella, Gerasa, Philadelphia, Heshbon, and Jericho. They returned to Nazareth by the coast route, touching Lydda, Joppa, Caesarea, thence around Mount Carmel to Ptolemais and Nazareth. This trip fairly well acquainted Jesus with the whole of Palestine north of the Jerusalem district. 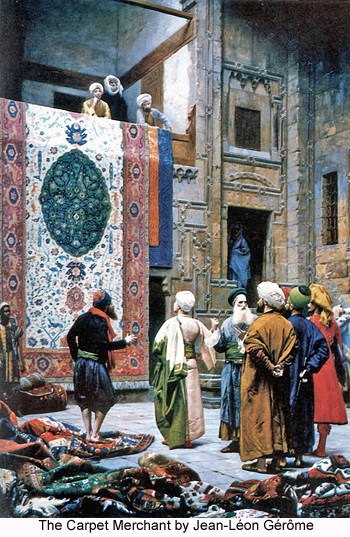 128:3.3 At Philadelphia Jesus and Simon became acquainted with a merchant from Damascus who developed such a great liking for the Nazareth couple that he insisted they stop with him at his Jerusalem headquarters. While Simon gave attendance at the temple, Jesus spent much of his time talking with this well-educated and much-traveled man of world affairs. This merchant owned over four thousand caravan camels; he had interests all over the Roman world and was now on his way to Rome. He proposed that Jesus come to Damascus to enter his Oriental import business, but Jesus explained that he did not feel justified in going so far away from his family just then. But on the way back home he thought much about these distant cities and the even more remote countries of the Far West and the Far East, countries he had so frequently heard spoken of by the caravan passengers and conductors.

128:3.4 Simon greatly enjoyed his visit to Jerusalem. He was duly received into the commonwealth of Israel at the Passover consecration of the new sons of the commandment. While Simon attended the Passover ceremonies, Jesus mingled with the throngs of visitors and engaged in many interesting personal conferences with numerous gentile proselytes.

128:3.7 On the Sunday after Passover week Simon and Jesus started on their way back to Nazareth. Simon never forgot what Jesus taught him on this trip. He had always loved Jesus, but now he felt that he had begun to know his father-brother. They had many heart-to-heart talks as they journeyed through the country and prepared their meals by the wayside. They arrived home Thursday noon, and Simon kept the family up late that night relating his experiences.

128:3.8 Mary was much upset by Simon's report that Jesus spent most of the time when in Jerusalem "visiting with the strangers, especially those from the far countries." Jesus' family never could comprehend his great interest in people, his urge to visit with them, to learn about their way of living, and to find out what they were thinking about.

128:3.9 More and more the Nazareth family became engrossed with their immediate and human problems; not often was mention made of the future mission of Jesus, and very seldom did he himself speak of his future career. His mother rarely thought about his being a child of promise. She was slowly giving up the idea that Jesus was to fulfill any divine mission on earth, yet at times her faith was revived when she paused to recall the Gabriel visitation before the child was born.