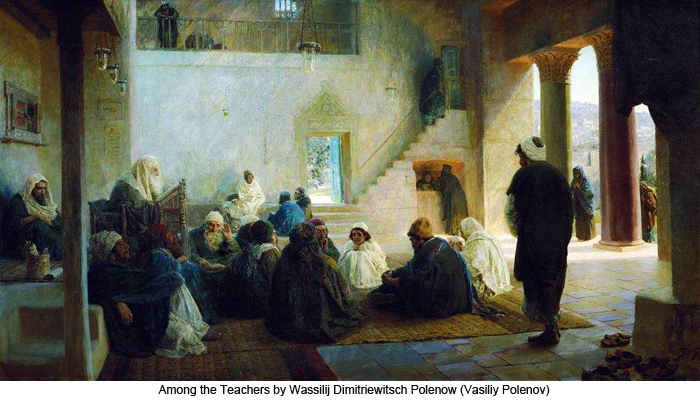 123:5.1 Jesus was now seven years old, the age when Jewish children were supposed to begin their formal education in the synagogue schools. Accordingly, in August of this year he entered upon his eventful school life at Nazareth. Already this lad was a fluent reader, writer, and speaker of two languages, Aramaic and Greek. He was now to acquaint himself with the task of learning to read, write, and speak the Hebrew language. And he was truly eager for the new school life which was ahead of him.

123:5.2 For three years—until he was ten—he attended the elementary school of the Nazareth synagogue. For these three years he studied the rudiments of the Book of the Law as it was recorded in the Hebrew tongue. For the following three years he studied in the advanced school and committed to memory, by the method of repeating aloud, the deeper teachings of the sacred law. He graduated from this school of the synagogue during his thirteenth year and was turned over to his parents by the synagogue rulers as an educated "son of the commandment"—henceforth a responsible citizen of the commonwealth of Israel, all of which entailed his attendance at the Passovers in Jerusalem; accordingly, he attended his first Passover that year in company with his father and mother.

123:5.3 At Nazareth the pupils sat on the floor in a semicircle, while their teacher, the chazan, an officer of the synagogue, sat facing them. Beginning with the Book of Leviticus, they passed on to the study of the other books of the law, followed by the study of the Prophets and the Psalms. The Nazareth synagogue possessed a complete copy of the Scriptures in Hebrew. Nothing but the Scriptures was studied prior to the twelfth year. In the summer months the hours for school were greatly shortened.

123:5.4 Jesus early became a master of Hebrew, and as a young man, when no visitor of prominence happened to be sojourning in Nazareth, he would often be asked to read the Hebrew scriptures to the faithful assembled in the synagogue at the regular Sabbath services.

123:5.5 These synagogue schools, of course, had no textbooks. In teaching, the chazan would utter a statement while the pupils would in unison repeat it after him. When having access to the written books of the law, the student learned his lesson by reading aloud and by constant repetition.

123:5.6 Next, in addition to his more formal schooling, Jesus began to make contact with human nature from the four quarters of the earth as men from many lands passed in and out of his father's repair shop. When he grew older, he mingled freely with the caravans as they tarried near the spring for rest and nourishment. Being a fluent speaker of Greek, he had little trouble in conversing with the majority of the caravan travelers and conductors.

123:5.7 Nazareth was a caravan way station and crossroads of travel and largely gentile in population; at the same time it was widely known as a center of liberal interpretation of Jewish traditional law. In Galilee the Jews mingled more freely with the gentiles than was their practice in Judea. And of all the cities of Galilee, the Jews of Nazareth were most liberal in their interpretation of the social restrictions based on the fears of contamination as a result of contact with the gentiles. And these conditions gave rise to the common saying in Jerusalem, "Can any good thing come out of Nazareth?"

123:5.8 Jesus received his moral training and spiritual culture chiefly in his own home. He secured much of his intellectual and theological education from the chazan. But his real education—that equipment of mind and heart for the actual test of grappling with the difficult problems of life—he obtained by mingling with his fellow men. It was this close association with his fellow men, young and old, Jew and gentile, that afforded him the opportunity to know the human race. Jesus was highly educated in that he thoroughly understood men and devotedly loved them.

123:5.9 Throughout his years at the synagogue he was a brilliant student, possessing a great advantage since he was conversant with three languages. The Nazareth chazan, on the occasion of Jesus' finishing the course in his school, remarked to Joseph that he feared he "had learned more from Jesus' searching questions" than he had "been able to teach the lad."

123:5.10 Throughout his course of study Jesus learned much and derived great inspiration from the regular Sabbath sermons in the synagogue. It was customary to ask distinguished visitors, stopping over the Sabbath in Nazareth, to address the synagogue. As Jesus grew up, he heard many great thinkers of the entire Jewish world expound their views, and many also who were hardly orthodox Jews since the synagogue of Nazareth was an advanced and liberal center of Hebrew thought and culture.

123:5.11 When entering school at seven years (at this time the Jews had just inaugurated a compulsory education law), it was customary for the pupils to choose their "birthday text," a sort of golden rule to guide them throughout their studies, one upon which they often expatiated at their graduation when thirteen years old. The text which Jesus chose was from the Prophet Isaiah: "The spirit of the Lord God is upon me, for the Lord has anointed me; he has sent me to bring good news to the meek, to bind up the brokenhearted, to proclaim liberty to the captives, and to set the spiritual prisoners free."

123:5.15 Before he was eight years of age, he was known to all the mothers and young women of Nazareth, who had met him and talked with him at the spring, which was not far from his home, and which was one of the social centers of contact and gossip for the entire town. This year Jesus learned to milk the family cow and care for the other animals. During this and the following year he also learned to make cheese and to weave. When he was ten years of age, he was an expert loom operator. It was about this time that Jesus and the neighbor boy Jacob became great friends of the potter who worked near the flowing spring; and as they watched Nathan's deft fingers mold the clay on the potter's wheel, many times both of them determined to be potters when they grew up. Nathan was very fond of the lads and often gave them clay to play with, seeking to stimulate their creative imaginations by suggesting competitive efforts in modeling various objects and animals 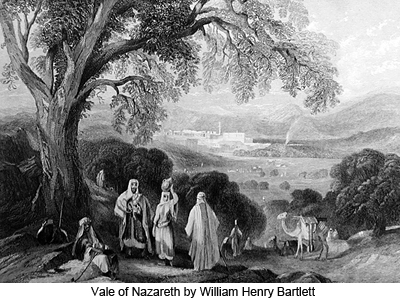