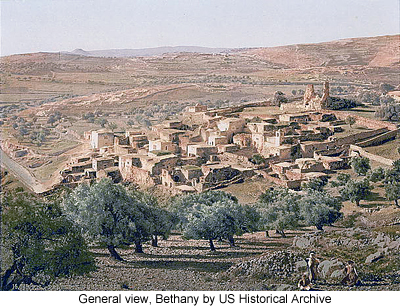 Throughout the week that followed the feast of tabernacles, scores of believers forgathered at Bethany and received instruction from the twelve apostles. The Sanhedrin made no effort to molest these gatherings since Jesus was not present; he was throughout this time working with Abner and his associates in Bethlehem. The day following the close of the feast, Jesus had departed for Bethany, and he did not again teach in the temple during this visit to Jerusalem.

At this time, Abner was making his headquarters at Bethlehem, and from that center many workers had been sent to the cities of Judea and southern Samaria and even to Alexandria. Within a few days of his arrival, Jesus and Abner completed the arrangements for the consolidation of the work of the two groups of apostles.

Throughout his visit to the feast of tabernacles, Jesus had divided his time about equally between Bethany and Bethlehem. At Bethany he spent considerable time with his apostles; at Bethlehem he gave much instruction to Abner and the other former apostles of John. And it was this intimate contact that finally led them to believe in him. These former apostles of John the Baptist were influenced by the courage he displayed in his public teaching in Jerusalem as well as by the sympathetic understanding they experienced in his private teaching at Bethlehem. These influences finally and fully won over each of Abner's associates to a wholehearted acceptance of the kingdom and all that such a step implied.

Before leaving Bethlehem for the last time, the Master made arrangements for them all to join him in the united effort which was to precede the ending of his earth career in the flesh. It was agreed that Abner and his associates were to join Jesus and the twelve in the near future at Magadan Park.

In accordance with this understanding, early in November Abner and his eleven fellows cast their lot with Jesus and the twelve and labored with them as one organization right on down to the crucifixion. ~ The Urantia Book, (162:9.1)