The Discourse On True Religion 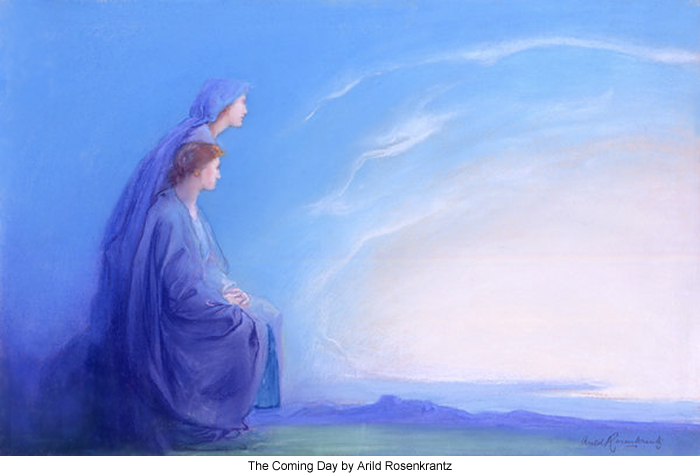 155:5.1 This memorable discourse on religion, summarized and restated in modern phraseology, gave expression to the following truths:

155:5.2 While the religions of the world have a double origin—natural and revelatory—at any one time and among any one people there are to be found three distinct forms of religious devotion. And these three manifestations of the religious urge are:

155:5.6 The religion of the physical senses and the superstitious fears of natural man, the Master refused to belittle, though he deplored the fact that so much of this primitive form of worship should persist in the religious forms of the more intelligent races of mankind. Jesus made it clear that the great difference between the religion of the mind and the religion of the spirit is that, while the former is upheld by ecclesiastical authority, the latter is wholly based on human experience.

155:5.7 And then the Master, in his hour of teaching, went on to make clear these truths:

155:5.8 Until the races become highly intelligent and more fully civilized, there will persist many of those childlike and superstitious ceremonies which are so characteristic of the evolutionary religious practices of primitive and backward peoples. Until the human race progresses to the level of a higher and more general recognition of the realities of spiritual experience, large numbers of men and women will continue to show a personal preference for those religions of authority which require only intellectual assent, in contrast to the religion of the spirit, which entails active participation of mind and soul in the faith adventure of grappling with the rigorous realities of progressive human experience.

155:5.9 The acceptance of the traditional religions of authority presents the easy way out for man's urge to seek satisfaction for the longings of his spiritual nature. The settled, crystallized, and established religions of authority afford a ready refuge to which the distracted and distraught soul of man may flee when harassed by fear and tormented by uncertainty. Such a religion requires of its devotees, as the price to be paid for its satisfactions and assurances, only a passive and purely intellectual assent.

155:5.10 And for a long time there will live on earth those timid, fearful, and hesitant individuals who will prefer thus to secure their religious consolations, even though, in so casting their lot with the religions of authority, they compromise the sovereignty of personality, debase the dignity of self-respect, and utterly surrender the right to participate in that most thrilling and inspiring of all possible human experiences: the personal quest for truth, the exhilaration of facing the perils of intellectual discovery, the determination to explore the realities of personal religious experience, the supreme satisfaction of experiencing the personal triumph of the actual realization of the victory of spiritual faith over intellectual doubt as it is honestly won in the supreme adventure of all human existence—man seeking God, for himself and as himself, and finding him.

155:5.11 The religion of the spirit means effort, struggle, conflict, faith, determination, love, loyalty, and progress. The religion of the mind—the theology of authority—requires little or none of these exertions from its formal believers. Tradition is a safe refuge and an easy path for those fearful and halfhearted souls who instinctively shun the spirit struggles and mental uncertainties associated with those faith voyages of daring adventure out upon the high seas of unexplored truth in search for the farther shores of spiritual realities as they may be discovered by the progressive human mind and experienced by the evolving human soul.

155:5.12 And Jesus went on to say: "At Jerusalem the religious leaders have formulated the various doctrines of their traditional teachers and the prophets of other days into an established system of intellectual beliefs, a religion of authority. The appeal of all such religions is largely to the mind. And now are we about to enter upon a deadly conflict with such a religion since we will so shortly begin the bold proclamation of a new religion—a religion which is not a religion in the present-day meaning of that word, a religion that makes its chief appeal to the divine spirit of my Father which resides in the mind of man; a religion which shall derive its authority from the fruits of its acceptance that will so certainly appear in the personal experience of all who really and truly become believers in the truths of this higher spiritual communion."

155:5.13 Pointing out each of the twenty-four and calling them by name, Jesus said: "And now, which one of you would prefer to take this easy path of conformity to an established and fossilized religion, as defended by the Pharisees at Jerusalem, rather than to suffer the difficulties and persecutions attendant upon the mission of proclaiming a better way of salvation to men while you realize the satisfaction of discovering for yourselves the beauties of the realities of a living and personal experience in the eternal truths and supreme grandeurs of the kingdom of heaven? Are you fearful, soft, and ease-seeking? Are you afraid to trust your future in the hands of the God of truth, whose sons you are? Are you distrustful of the Father, whose children you are? Will you go back to the easy path of the certainty and intellectual settledness of the religion of traditional authority, or will you gird yourselves to go forward with me into that uncertain and troublous future of proclaiming the new truths of the religion of the spirit, the kingdom of heaven in the hearts of men?"

155:5.14 All twenty-four of his hearers rose to their feet, intending to signify their united and loyal response to this, one of the few emotional appeals which Jesus ever made to them, but he raised his hand and stopped them, saying: "Go now apart by yourselves, each man alone with the Father, and there find the unemotional answer to my question, and having found such a true and sincere attitude of soul, speak that answer freely and boldly to my Father and your Father, whose infinite life of love is the very spirit of the religion we proclaim."

155:5.15 The evangelists and apostles went apart by themselves for a short time. Their spirits were uplifted, their minds were inspired, and their emotions mightily stirred by what Jesus had said. But when Andrew called them together, the Master said only: "Let us resume our journey. We go into Phoenicia to tarry for a season, and all of you should pray the Father to transform your emotions of mind and body into the higher loyalties of mind and the more satisfying experiences of the spirit."

155:5.16 As they journeyed on down the road, the twenty-four were silent, but presently they began to talk one with another, and by three o'clock that afternoon they could not go farther; they came to a halt, and Peter, going up to Jesus, said: "Master, you have spoken to us the words of life and truth. We would hear more; we beseech you to speak to us further concerning these matters."