Jesus Is Taken To Annas' House 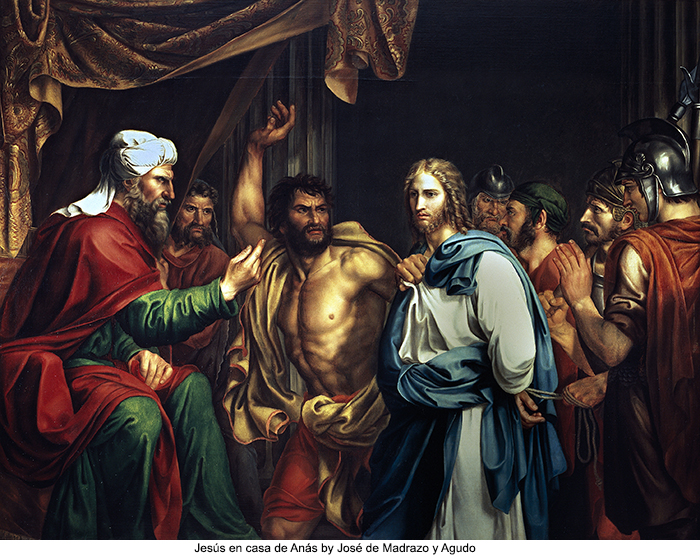 183:5.1 Before they started away from the garden with Jesus, a dispute arose between the Jewish captain of the temple guards and the Roman captain of the company of soldiers as to where they were to take Jesus. The captain of the temple guards gave orders that he should be taken to Caiaphas, the acting high priest. The captain of the Roman soldiers directed that Jesus be taken to the palace of Annas, the former high priest and father-in-law of Caiaphas. And this he did because the Romans were in the habit of dealing directly with Annas in all matters having to do with the enforcement of the Jewish ecclesiastical laws. And the orders of the Roman captain were obeyed; they took Jesus to the home of Annas for his preliminary examination.

183:5.2 Judas marched along near the captains, overhearing all that was said, but took no part in the dispute, for neither the Jewish captain nor the Roman officer would so much as speak to the betrayer—they held him in such contempt.

183:5.3 About this time John Zebedee, remembering his Master's instructions to remain always near at hand, hurried up near Jesus as he marched along between the two captains. The commander of the temple guards, seeing John come up alongside, said to his assistant: "Take this man and bind him. He is one of this fellow's followers." But when the Roman captain heard this and, looking around, saw John, he gave orders that the apostle should come over by him, and that no man should molest him. Then the Roman captain said to the Jewish captain: "This man is neither a traitor nor a coward. I saw him in the garden, and he did not draw a sword to resist us. He has the courage to come forward to be with his Master, and no man shall lay hands on him. The Roman law allows that any prisoner may have at least one friend to stand with him before the judgment bar, and this man shall not be prevented from standing by the side of his Master, the prisoner." And when Judas heard this, he was so ashamed and humiliated that he dropped back behind the marchers, coming up to the palace of Annas alone.

183:5.4 And this explains why John Zebedee was permitted to remain near Jesus all the way through his trying experiences this night and the next day. The Jews feared to say aught to John or to molest him in any way because he had something of the status of a Roman counselor designated to act as observer of the transactions of the Jewish ecclesiastical court. John's position of privilege was made all the more secure when, in turning Jesus over to the captain of the temple guards at the gate of Annas's palace, the Roman, addressing his assistant, said: "Go along with this prisoner and see that these Jews do not kill him without Pilate's consent. Watch that they do not assassinate him, and see that his friend, the Galilean, is permitted to stand by and observe all that goes on." And thus was John able to be near Jesus right on up to the time of his death on the cross, though the other ten apostles were compelled to remain in hiding. John was acting under Roman protection, and the Jews dared not molest him until after the Master's death.