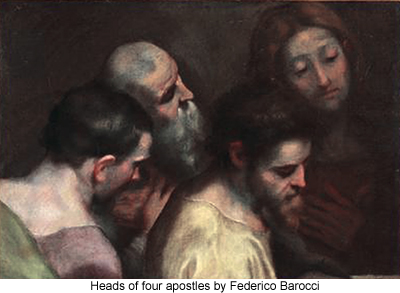 147:4.1 On the evening of this same Sabbath day, at Bethany, while Jesus, the twelve, and a group of believers were assembled about the fire in Lazarus's garden, Nathaniel asked Jesus this question: "Master, although you have taught us the positive version of the old rule of life, instructing us that we should do to others as we wish them to do to us, I do not fully discern how we can always abide by such an injunction. Let me illustrate my contention by citing the example of a lustful man who thus wickedly looks upon his intended consort in sin. How can we teach that this evil-intending man should do to others as he would they should do to him?"

147:4.2 When Jesus heard Nathaniel's question, he immediately stood upon his feet and, pointing his finger at the apostle, said: "Nathaniel, Nathaniel! What manner of thinking is going on in your heart? Do you not receive my teachings as one who has been born of the spirit? Do you not hear the truth as men of wisdom and spiritual understanding? When I admonished you to do to others as you would have them do to you, I spoke to men of high ideals, not to those who would be tempted to distort my teaching into a license for the encouragement of evildoing."

147:4.3 When the Master had spoken, Nathaniel stood up and said: "But, Master, you should not think that I approve of such an interpretation of your teaching. I asked the question because I conjectured that many such men might thus misjudge your admonition, and I hoped you would give us further instruction regarding these matters." And then when Nathaniel had sat down, Jesus continued speaking: "I well know, Nathaniel, that no such idea of evil is approved in your mind, but I am disappointed in that you all so often fail to put a genuinely spiritual interpretation upon my commonplace teachings, instruction which must be given you in human language and as men must speak. Let me now teach you concerning the differing levels of meaning attached to the interpretation of this rule of living, this admonition to `do to others that which you desire others to do to you':

147:4.10 Nothing Jesus had said to the apostles up to this time had ever more astonished them. They continued to discuss the Master's words long after he had retired. While Nathaniel was slow to recover from his supposition that Jesus had misunderstood the spirit of his question, the others were more than thankful that their philosophic fellow apostle had had the courage to ask such a thought-provoking question.