Amos, The Kheresa Lunatic, And The Herd Of Swine 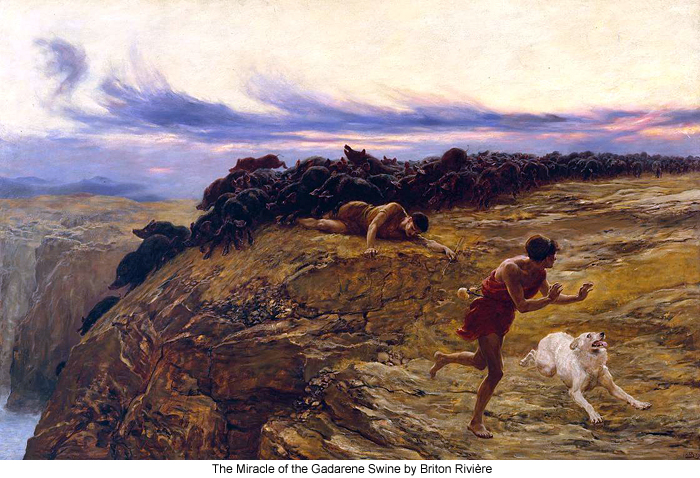 151:6.1 Although most of the near-by eastern shore of the lake sloped up gently to the highlands beyond, at this particular spot there was a steep hillside, the shore in some places dropping sheer down into the lake. Pointing up to the side of the near-by hill, Jesus said: "Let us go up on this hillside for our breakfast and under some of the shelters rest and talk."

151:6.2 This entire hillside was covered with caverns which had been hewn out of the rock. Many of these niches were ancient sepulchres. About halfway up the hillside on a small, relatively level spot was the cemetery of the little village of Kheresa. As Jesus and his associates passed near this burial ground, a lunatic who lived in these hillside caverns rushed up to them. This demented man was well known about these parts, having onetime been bound with fetters and chains and confined in one of the grottoes. Long since he had broken his shackles and now roamed at will among the tombs and abandoned sepulchres.

151:6.3 This man, whose name was Amos, was afflicted with a periodic form of insanity. There were considerable spells when he would find some clothing and deport himself fairly well among his fellows. During one of these lucid intervals he had gone over to Bethsaida, where he heard the preaching of Jesus and the apostles, and at that time had become a halfhearted believer in the gospel of the kingdom. But soon a stormy phase of his trouble appeared, and he fled to the tombs, where he moaned, cried out aloud, and so conducted himself as to terrorize all who chanced to meet him.

151:6.4 When Amos recognized Jesus, he fell down at his feet and exclaimed: "I know you, Jesus, but I am possessed of many devils, and I beseech that you will not torment me." This man truly believed that his periodic mental affliction was due to the fact that, at such times, evil or unclean spirits entered into him and dominated his mind and body. His troubles were mostly emotional-his brain was not grossly diseased.

151:6.5 Jesus, looking down upon the man crouching like an animal at his feet, reached down and, taking him by the hand, stood him up and said to him: "Amos, you are not possessed of a devil; you have already heard the good news that you are a son of God. I command you to come out of this spell." And when Amos heard Jesus speak these words, there occurred such a transformation in his intellect that he was immediately restored to his right mind and the normal control of his emotions. By this time a considerable crowd had assembled from the near-by village, and these people, augmented by the swine herders from the highland above them, were astonished to see the lunatic sitting with Jesus and his followers, in possession of his right mind and freely conversing with them.

151:6.6 As the swine herders rushed into the village to spread the news of the taming of the lunatic, the dogs charged upon a small and untended herd of about thirty swine and drove most of them over a precipice into the sea. And it was this incidental occurrence, in connection with the presence of Jesus and the supposed miraculous curing of the lunatic, that gave origin to the legend that Jesus had cured Amos by casting a legion of devils out of him, and that these devils had entered into the herd of swine, causing them forthwith to rush headlong to their destruction in the sea below. Before the day was over, this episode was published abroad by the swine tenders, and the whole village believed it. Amos most certainly believed this story; he saw the swine tumbling over the brow of the hill shortly after his troubled mind had quieted down, and he always believed that they carried with them the very evil spirits which had so long tormented and afflicted him. And this had a good deal to do with the permanency of his cure. It is equally true that all of Jesus' apostles (save Thomas) believed that the episode of the swine was directly connected with the cure of Amos.

151:6.7 Jesus did not obtain the rest he was looking for. Most of that day he was thronged by those who came in response to the word that Amos had been cured, and who were attracted by the story that the demons had gone out of the lunatic into the herd of swine. And so, after only one night of rest, early Tuesday morning Jesus and his friends were awakened by a delegation of these swine-raising gentiles who had come to urge that he depart from their midst. Said their spokesman to Peter and Andrew : "Fishermen of Galilee, depart from us and take your prophet with you. We know he is a holy man, but the gods of our country do not know him, and we stand in danger of losing many swine. The fear of you has descended upon us, so that we pray you to go hence." And when Jesus heard them, he said to Andrew, "Let us return to our place."

151:6.8 As they were about to depart, Amos besought Jesus to permit him to go back with them, but the Master would not consent. Said Jesus to Amos: "Forget not that you are a son of God. Return to your own people and show them what great things God has done for you." And Amos went about publishing that Jesus had cast a legion of devils out of his troubled soul, and that these evil spirits had entered into a herd of swine, driving them to quick destruction. And he did not stop until he had gone into all the cities of the Decapolis, declaring what great things Jesus had done for him.