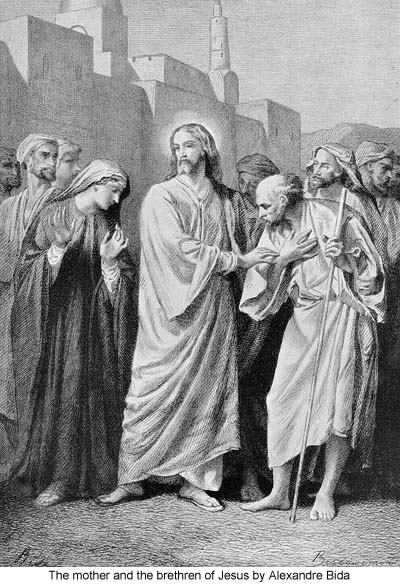 154:6.1 It was about eight o'clock on this Sunday morning when five members of Jesus' earth family arrived on the scene in response to the urgent summons of Jude's sister-in-law. Of all his family in the flesh, only one, Ruth, believed wholeheartedly and continuously in the divinity of his mission on earth. Jude and James, and even Joseph, still retained much of their faith in Jesus, but they had permitted pride to interfere with their better judgment and real spiritual inclinations. Mary was likewise torn between love and fear, between mother love and family pride. Though she was harassed by doubts, she could never quite forget the visit of Gabriel ere Jesus was born. The Pharisees had been laboring to persuade Mary that Jesus was beside himself, demented. They urged her to go with her sons and seek to dissuade him from further efforts at public teaching. They assured Mary that soon Jesus' health would break, and that only dishonor and disgrace could come upon the entire family as a result of allowing him to go on. And so, when the word came from Jude's sister-in-law, all five of them started at once for Zebedee's house, having been together at Mary's home, where they had met with the Pharisees the evening before. They had talked with the Jerusalem leaders long into the night, and all were more or less convinced that Jesus was acting strangely, that he had acted strangely for some time. While Ruth could not explain all of his conduct, she insisted that he had always treated his family fairly and refused to agree to the program of trying to dissuade him from further work.

154:6.2 On the way to Zebedee's house they talked these things over and agreed among themselves to try to persuade Jesus to come home with them, for, said Mary: "I know I could influence my son if he would only come home and listen to me." James and Jude had heard rumors concerning the plans to arrest Jesus and take him to Jerusalem for trial. They also feared for their own safety. As long as Jesus was a popular figure in the public eye, his family allowed matters to drift along, but now that the people of Capernaum and the leaders at Jerusalem had suddenly turned against him, they began keenly to feel the pressure of the supposed disgrace of their embarrassing position.

154:6.3 They had expected to meet Jesus, take him aside, and urge him to go home with them. They had thought to assure him that they would forget his neglect of them—they would forgive and forget—if he would only give up the foolishness of trying to preach a new religion which could bring only trouble to himself and dishonor upon his family. To all of this Ruth would say only: "I will tell my brother that I think he is a man of God, and that I hope he would be willing to die before he would allow these wicked Pharisees to stop his preaching." Joseph promised to keep Ruth quiet while the others labored with Jesus.

154:6.4 When they reached the Zebedee house, Jesus was in the very midst of delivering his parting address to the disciples. They sought to gain entrance to the house, but it was crowded to overflowing. Finally they established themselves on the back porch and had word passed in to Jesus, from person to person, so that it finally was whispered to him by Simon Peter, who interrupted his talking for the purpose, and who said: "Behold, your mother and your brothers are outside, and they are very anxious to speak with you." Now it did not occur to his mother how important was the giving of this parting message to his followers, neither did she know that his address was likely to be terminated any moment by the arrival of his apprehenders. She really thought, after so long an apparent estrangement, in view of the fact that she and his brothers had shown the grace actually to come to him, that Jesus would cease speaking and come to them the moment he received word they were waiting.

154:6.5 It was just another of those instances in which his earth family could not comprehend that he must be about his Father's business. And so Mary and his brothers were deeply hurt when, notwithstanding that he paused in his speaking to receive the message, instead of his rushing out to greet them, they heard his musical voice speak with increased volume: "Say to my mother and my brothers that they should have no fear for me. The Father who sent me into the world will not forsake me; neither shall any harm come upon my family. Bid them be of good courage and put their trust in the Father of the kingdom. But, after all, who is my mother and who are my brothers?"And stretching forth his hands toward all of his disciples assembled in the room, he said: "I have no mother; I have no brothers. Behold my mother and behold my brethren! For whosoever does the will of my Father who is in heaven, the same is my mother, my brother, and my sister."

154:6.6 And when Mary heard these words, she collapsed in Jude's arms. They carried her out in the garden to revive her while Jesus spoke the concluding words of his parting message. He would then have gone out to confer with his mother and his brothers, but a messenger arrived in haste from Tiberias bringing word that the officers of the Sanhedrin were on their way with authority to arrest Jesus and carry him to Jerusalem. Andrew received this message and, interrupting Jesus, told it to him.

154:6.7 Andrew did not recall that David had posted some twenty-five sentinels about the Zebedee house, and that no one could take them by surprise; so he asked Jesus what should be done. The Master stood there in silence while his mother, having heard the words, "I have no mother," was recovering from the shock in the garden. It was at just this time that a woman in the room stood up and exclaimed, "Blessed is the womb that bore you and blessed are the breasts that nursed you." Jesus turned aside a moment from his conversation with Andrew to answer this woman by saying, "No, rather is the one blessed who hears the word of God and dares to obey it."

154:6.8 Mary and Jesus' brothers thought that Jesus did not understand them, that he had lost interest in them, little realizing that it was they who failed to understand Jesus. Jesus fully understood how difficult it is for men to break with their past. He knew how human beings are swayed by the preacher's eloquence, and how the conscience responds to emotional appeal as the mind does to logic and reason, but he also knew how far more difficult it is to persuade men to disown the past.

154:6.9 It is forever true that all who may think they are misunderstood or not appreciated have in Jesus a sympathizing friend and an understanding counselor. He had warned his apostles that a man's foes may be they of his own household, but he had hardly realized how near this prediction would come to apply to his own experience. Jesus did not forsake his earth family to do his Father's work—they forsook him. Later on, after the Master's death and resurrection, when James became connected with the early Christian movement, he suffered immeasurably as a result of his failure to enjoy this earlier association with Jesus and his disciples.

154:6.10 In passing through these events, Jesus chose to be guided by the limited knowledge of his human mind. He desired to undergo the experience with his associates as a mere man. And it was in the human mind of Jesus to see his family before he left. He did not wish to stop in the midst of his discourse and thus render their first meeting after so long a separation such a public affair. He had intended to finish his address and then have a visit with them before leaving, but this plan was thwarted by the conspiracy of events which immediately followed.

154:6.11 The haste of their flight was augmented by the arrival of a party of David's messengers at the rear entrance of the Zebedee home. The commotion produced by these men frightened the apostles into thinking that these new arrivals might be their apprehenders, and in fear of immediate arrest, they hastened through the front entrance to the waiting boat. And all of this explains why Jesus did not see his family waiting on the back porch.

154:6.12 But he did say to David Zebedee as he entered the boat in hasty flight: "Tell my mother and my brothers that I appreciate their coming, and that I intended to see them. Admonish them to find no offense in me but rather to seek for a knowledge of the will of God and for grace and courage to do that will."

154:7.5 Jesus' family returned to their home in Capernaum and spent almost a week in talking, debating, and praying. They were filled with confusion and consternation. They enjoyed no peace of mind until Thursday afternoon, when Ruth returned from a visit to the Zebedee house, where she learned from David that her father-brother was safe and in good health and making his way toward the Phoenician coast.