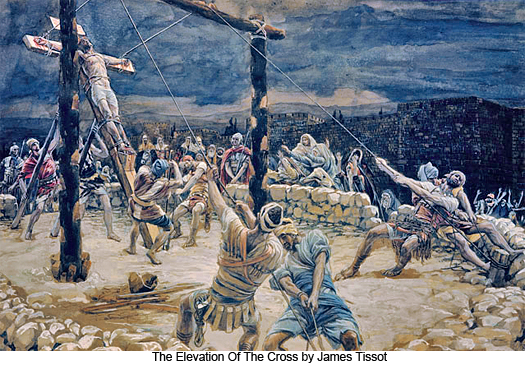 187:2.7 The Apostle John, with Mary the mother of Jesus, Ruth, and Jude, arrived on the scene just after Jesus had been hoisted to his position on the cross, and just as the captain was nailing the title above the Master's head. John was the only one of the eleven apostles to witness the crucifixion, and even he was not present all of the time since he ran into Jerusalem to bring back his mother and her friends soon after he had brought Jesus' mother to the scene.

187:2.8 As Jesus saw his mother, with John and his brother and sister, he smiled but said nothing. Meanwhile the four soldiers assigned to the Master's crucifixion, as was the custom, had divided his clothes among them, one taking the sandals, one the turban, one the girdle, and the fourth the cloak. This left the tunic, or seamless vestment reaching down to near the knees, to be cut up into four pieces, but when the soldiers saw what an unusual garment it was, they decided to cast lots for it. Jesus looked down on them while they divided his garments, and the thoughtless crowd jeered at him.

187:2.9 It was well that the Roman soldiers took possession of the Master's clothing. Otherwise, if his followers had gained possession of these garments, they would have been tempted to resort to superstitious relic worship. The Master desired that his followers should have nothing material to associate with his life on earth. He wanted to leave mankind only the memory of a human life dedicated to the high spiritual ideal of being consecrated to doing the Father's will.