The Woman Of Unsavory Repute 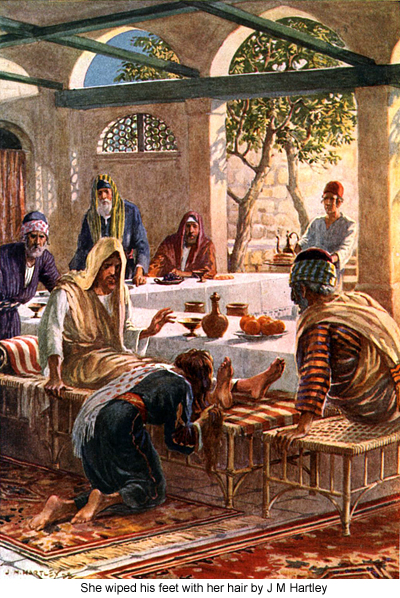 147:5.1 Though Simon was not a member of the Jewish Sanhedrin, he was an influential Pharisee of Jerusalem. He was a halfhearted believer, and notwithstanding that he might be severely criticized therefor, he dared to invite Jesus and his personal associates, Peter, James, and John, to his home for a social meal. Simon had long observed the Master and was much impressed with his teachings and even more so with his personality.

147:5.2 The wealthy Pharisees were devoted to almsgiving, and they did not shun publicity regarding their philanthropy. Sometimes they would even blow a trumpet as they were about to bestow charity upon some beggar. It was the custom of these Pharisees, when they provided a banquet for distinguished guests, to leave the doors of the house open so that even the street beggars might come in and, standing around the walls of the room behind the couches of the diners, be in position to receive portions of food which might be tossed to them by the banqueters.

147:5.3 On this particular occasion at Simon's house, among those who came in off the street was a woman of unsavory reputation who had recently become a believer in the good news of the gospel of the kingdom. This woman was well known throughout all Jerusalem as the former keeper of one of the so-called high-class brothels located hard by the temple court of the gentiles. She had, on accepting the teachings of Jesus, closed up her nefarious place of business and had induced the majority of the women associated with her to accept the gospel and change their mode of living; notwithstanding this, she was still held in great disdain by the Pharisees and was compelled to wear her hair down-the badge of harlotry. This unnamed woman had brought with her a large flask of perfumed anointing lotion and, standing behind Jesus as he reclined at meat, began to anoint his feet while she also wet his feet with her tears of gratitude, wiping them with the hair of her head. And when she had finished this anointing, she continued weeping and kissing his feet.

147:5.4 When Simon saw all this, he said to himself: "This man, if he were a prophet, would have perceived who and what manner of woman this is who thus touches him; that she is a notorious sinner." And Jesus, knowing what was going on in Simon's mind, spoke up, saying: "Simon, I have something which I would like to say to you." Simon answered, "Teacher, say on." Then said Jesus: "A certain wealthy moneylender had two debtors. The one owed him five hundred denarii and the other fifty. Now, when neither of them had wherewith to pay, he forgave them both. Which of them do you think, Simon, would love him most?" Simon answered, "He, I suppose, whom he forgave the most." And Jesus said, "You have rightly judged," and pointing to the woman, he continued: "Simon, take a good look at this woman. I entered your house as an invited guest, yet you gave me no water for my feet. This grateful woman has washed my feet with tears and wiped them with the hair of her head. You gave me no kiss of friendly greeting, but this woman , ever since she came in, has not ceased to kiss my feet. My head with oil you neglected to anoint, but she has anointed my feet with precious lotions. And what is the meaning of all this? Simply that her many sins have been forgiven, and this has led her to love much. But those who have received but little forgiveness sometimes love but little." And turning around toward the woman, he took her by the hand and, lifting her up, said: "You have indeed repented of your sins, and they are forgiven. Be not discouraged by the thoughtless and unkind attitude of your fellows; go on in the joy and liberty of the kingdom of heaven."