The Wedding At Cana 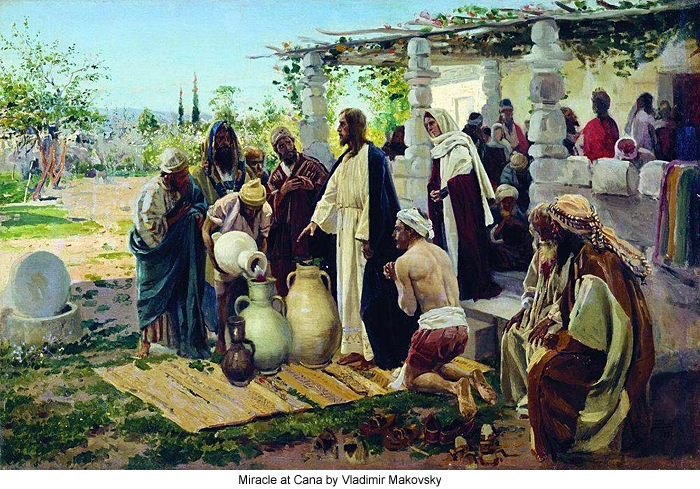 137:4.1 By noon on Wednesday almost a thousand guests had arrived in Cana, more than four times the number bidden to the wedding feast. It was a Jewish custom to celebrate weddings on Wednesday, and the invitations had been sent abroad for the wedding one month previously. In the forenoon and early afternoon it appeared more like a public reception for Jesus than a wedding. Everybody wanted to greet this near-famous Galilean, and he was most cordial to all, young and old, Jew and gentile. And everybody rejoiced when Jesus consented to lead the preliminary wedding procession.

137:4.2 Jesus was now thoroughly self-conscious regarding his human existence, his divine pre-existence, and the status of his combined, or fused, human and divine natures. With perfect poise he could at one moment enact the human role or immediately assume the personality prerogatives of the divine nature.

137:4.3 As the day wore on, Jesus became increasingly conscious that the people were expecting him to perform some wonder; more especially he recognized that his family and his six disciple- apostles were looking for him appropriately to announce his forthcoming kingdom by some startling and supernatural manifestation.

137:4.4 Early in the afternoon Mary summoned James, and together they made bold to approach Jesus to inquire if he would admit them to his confidence to the extent of informing them at what hour and at what point in connection with the wedding ceremonies he had planned to manifest himself as the "supernatural one." No sooner had they spoken of these matters to Jesus than they saw they had aroused his characteristic indignation. He said only: "If you love me, then be willing to tarry with me while I wait upon the will of my Father who is in heaven." But the eloquence of his rebuke lay in the _expression of his face.

137:4.5 This move of his mother was a great disappointment to the human Jesus, and he was much sobered by his reaction to her suggestive proposal that he permit himself to indulge in some outward demonstration of his divinity. That was one of the very things he had decided not to do when so recently isolated in the hills. For several hours Mary was much depressed. She said to James: "I cannot understand him; what can it all mean? Is there no end to his strange conduct?" James and Jude tried to comfort their mother, while Jesus withdrew for an hour's solitude. But he returned to the gathering and was once more lighthearted and joyous.

137:4.6 The wedding proceeded with a hush of expectancy, but the entire ceremony was finished and not a move, not a word, from the honored guest. Then it was whispered about that the carpenter and boatbuilder, announced by John as "the Deliverer," would show his hand during the evening festivities, perhaps at the wedding supper. But all expectance of such a demonstration was effectually removed from the minds of his six disciple- apostles when he called them together just before the wedding supper and, in great earnestness, said: "Think not that I have come to this place to work some wonder for the gratification of the curious or for the conviction of those who doubt. Rather are we here to wait upon the will of our Father who is in heaven." But when Mary and the others saw him in consultation with his associates, they were fully persuaded in their own minds that something extraordinary was about to happen. And they all sat down to enjoy the wedding supper and the evening of festive good fellowship.

137:4.7 The father of the bridegroom had provided plenty of wine for all the guests bidden to the marriage feast, but how was he to know that the marriage of his son was to become an event so closely associated with the expected manifestation of Jesus as the Messianic deliverer? He was delighted to have the honor of numbering the celebrated Galilean among his guests, but before the wedding supper was over, the servants brought him the disconcerting news that the wine was running short. By the time the formal supper had ended and the guests were strolling about in the garden, the mother of the bridegroom confided to Mary that the supply of wine was exhausted. And Mary confidently said: "Have no worry-I will speak to my son. He will help us." And thus did she presume to speak, notwithstanding the rebuke of but a few hours before.

137:4.8 Throughout a period of many years, Mary had always turned to Jesus for help in every crisis of their home life at Nazareth so that it was only natural for her to think of him at this time. But this ambitious mother had still other motives for appealing to her eldest son on this occasion. As Jesus was standing alone in a corner of the garden, his mother approached him, saying, "My son, they have no wine." And Jesus answered, "My good woman, what have I to do with that?" Said Mary, "But I believe your hour has come; cannot you help us?" Jesus replied: "Again I declare that I have not come to do things in this wise. Why do you trouble me again with these matters?" And then, breaking down in tears, Mary entreated him, "But, my son, I promised them that you would help us; won't you please do something for me?" And then spoke Jesus: "Woman, what have you to do with making such promises? See that you do it not again. We must in all things wait upon the will of the Father in heaven."

137:4.9 Mary the mother of Jesus was crushed; she was stunned! As she stood there before him motionless, with the tears streaming down her face, the human heart of Jesus was overcome with compassion for the woman who had borne him in the flesh; and bending forward, he laid his hand tenderly upon her head, saying: "Now, now, Mother Mary, grieve not over my apparently hard sayings, for have I not many times told you that I have come only to do the will of my heavenly Father? Most gladly would I do what you ask of me if it were a part of the Father's will-" and Jesus stopped short, he hesitated. Mary seemed to sense that something was happening. Leaping up, she threw her arms around Jesus' neck, kissed him, and rushed off to the servants' quarters, saying, "Whatever my son says, that do." But Jesus said nothing. He now realized that he had already said-or rather desirefully thought-too much.

137:4.10 Mary was dancing with glee. She did not know how the wine would be produced, but she confidently believed that she had finally persuaded her first-born son to assert his authority, to dare to step forth and claim his position and exhibit his Messianic power. And, because of the presence and association of certain universe powers and personalities, of which all those present were wholly ignorant, she was not to be disappointed. The wine Mary desired and which Jesus, the God-man, humanly and sympathetically wished for, was forthcoming.

137:4.11 Near at hand stood six waterpots of stone, filled with water, holding about twenty gallons apiece. This water was intended for subsequent use in the final purification ceremonies of the wedding celebration. The commotion of the servants about these huge stone vessels, under the busy direction of his mother, attracted Jesus' attention, and going over, he observed that they were drawing wine out of them by the pitcherful.

137:4.12 It was gradually dawning upon Jesus what had happened. Of all persons present at the marriage feast of Cana, Jesus was the most surprised. Others had expected him to work a wonder, but that was just what he had purposed not to do. And then the Son of Man recalled the admonition of his Personalized Thought Adjuster in the hills. He recounted how the Adjuster had warned him about the inability of any power or personality to deprive him of the creator prerogative of independence of time. On this occasion power transformers, midwayers, and all other required personalities were assembled near the water and other necessary elements, and in the face of the expressed wish of the Universe Creator Sovereign, there was no escaping the instantaneous appearance of wine. And this occurrence was made doubly certain since the Personalized Adjuster had signified that the execution of the Son's desire was in no way a contravention of the Father's will.

137:4.13 But this was in no sense a miracle. No law of nature was modified, abrogated, or even transcended. Nothing happened but the abrogation of time in association with the celestial assembly of the chemical elements requisite for the elaboration of the wine. At Cana on this occasion the agents of the Creator made wine just as they do by the ordinary natural processes except that they did it independently of time and with the intervention of superhuman agencies in the matter of the space assembly of the necessary chemical ingredients.

137:4.14 Furthermore it was evident that the enactment of this so-called miracle was not contrary to the will of the Paradise Father, else it would not have transpired, since Jesus had already subjected himself in all things to the Father's will.

137:4.15 When the servants drew this new wine and carried it to the best man, the "ruler of the feast," and when he had tasted it, he called to the bridegroom, saying: "It is the custom to set out first the good wine and, when the guests have well drunk, to bring forth the inferior fruit of the vine; but you have kept the best of the wine until the last of the feast."

137:4.16 Mary and the disciples of Jesus were greatly rejoiced at the supposed miracle which they thought Jesus had intentionally performed, but Jesus withdrew to a sheltered nook of the garden and engaged in serious thought for a few brief moments. He finally decided that the episode was beyond his personal control under the circumstances and, not being adverse to his Father's will, was inevitable. When he returned to the people, they regarded him with awe; they all believed in him as the Messiah. But Jesus was sorely perplexed, knowing that they believed in him only because of the unusual occurrence which they had just inadvertently beheld. Again Jesus retired for a season to the housetop that he might think it all over.

137:4.17 Jesus now fully comprehended that he must constantly be on guard lest his indulgence of sympathy and pity become responsible for repeated episodes of this sort. Nevertheless, many similar events occurred before the Son of Man took final leave of his mortal life in the flesh.