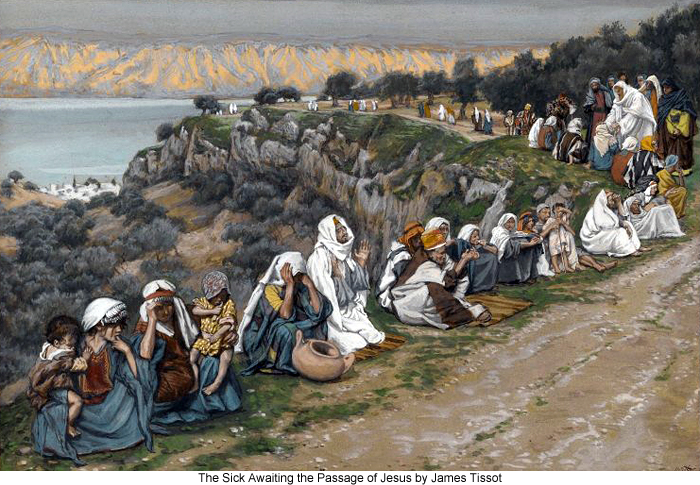 148:2.1 In connection with the seaside encampment, Elman, the Syrian physician, with the assistance of a corps of twenty-five young women and twelve men, organized and conducted for four months what should be regarded as the kingdom's first hospital. At this infirmary, located a short distance to the south of the main tented city, they treated the sick in accordance with all known material methods as well as by the spiritual practices of prayer and faith encouragement. Jesus visited the sick of this encampment not less than three times a week and made personal contact with each sufferer. As far as we know, no so-called miracles of supernatural healing occurred among the one thousand afflicted and ailing persons who went away from this infirmary improved or cured. However, the vast majority of these benefited individuals ceased not to proclaim that Jesus had healed them.

148:2.2 Many of the cures effected by Jesus in connection with his ministry in behalf of Elman's patients did, indeed, appear to resemble the working of miracles, but we were instructed that they were only just such transformations of mind and spirit as may occur in the experience of expectant and faith-dominated persons who are under the immediate and inspirational influence of a strong, positive, and beneficent personality whose ministry banishes fear and destroys anxiety.

148:2.3 Elman and his associates endeavored to teach the truth to these sick ones concerning the "possession of evil spirits," but they met with little success. The belief that physical sickness and mental derangement could be caused by the dwelling of a so-called unclean spirit in the mind or body of the afflicted person was well-nigh universal.

148:2.4 In all his contact with the sick and afflicted, when it came to the technique of treatment or the revelation of the unknown causes of disease, Jesus did not disregard the instructions of his Paradise brother, Immanuel, given ere he embarked upon the venture of the Urantia incarnation. Notwithstanding this, those who ministered to the sick learned many helpful lessons by observing the manner in which Jesus inspired the faith and confidence of the sick and suffering.