Home Jesus Illustrated Stories The Heralds Of The Resurrection

The Heralds Of The Resurrection

190:1.2 When the apostles refused to believe the report of the five women who represented that they had seen Jesus and talked with him, Mary Magdalene returned to the tomb, and the others went back to Joseph's house, where they related their experiences to his daughter and the other women. And the women believed their report. Shortly after six o'clock the daughter of Joseph of Arimathea and the four women who had seen Jesus went over to the home of Nicodemus, where they related all these happenings to Joseph, Nicodemus, David Zebedee, and the other men there assembled. Nicodemus and the others doubted their story, doubted that Jesus had risen from the dead; they conjectured that the Jews had removed the body. Joseph and David were disposed to believe the report, so much so that they hurried out to inspect the tomb, and they found everything just as the women had described. And they were the last to so view the sepulchre, for the high priest sent the captain of the temple guards to the tomb at half past seven o'clock to remove the grave cloths. The captain wrapped them all up in the linen sheet and threw them over a near-by cliff.

190:1.3 From the tomb David and Joseph went immediately to the home of Elijah Mark, where they held a conference with the ten apostles in the upper chamber. Only John Zebedee was disposed to believe, even faintly, that Jesus had risen from the dead. Peter had believed at first but, when he failed to find the Master, fell into grave doubting. They were all disposed to believe that the Jews had removed the body. David would not argue with them, but when he left, he said: "You are the apostles, and you ought to understand these things. I will not contend with you; nevertheless, I now go back to the home of Nicodemus, where I have appointed with the messengers to assemble this morning, and when they have gathered together, I will send them forth on their last mission, as heralds of the Master's resurrection. I heard the Master say that, after he should die, he would rise on the third day, and I believe him." And thus speaking to the dejected and forlorn ambassadors of the kingdom, this self-appointed chief of communication and intelligence took leave of the apostles. On his way from the upper chamber he dropped the bag of Judas, containing all the apostolic funds, in the lap of Matthew Levi. 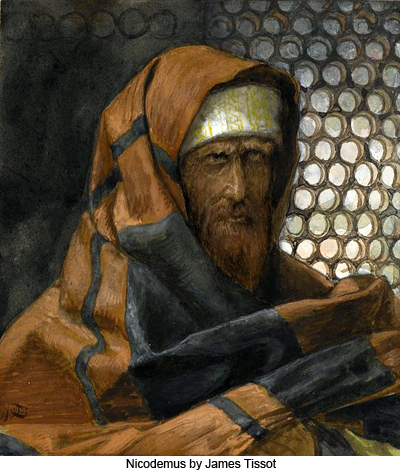 190:1.4 It was about half past nine o'clock when the last of David's twenty-six messengers arrived at the home of Nicodemus. David promptly assembled them in the spacious courtyard and addressed them:

190:1.5 "Men and brethren, all this time you have served me in accordance with your oath to me and to one another, and I call you to witness that I have never yet sent out false information at your hands. I am about to send you on your last mission as volunteer messengers of the kingdom, and in so doing I release you from your oaths and thereby disband the messenger corps. Men, I declare to you that we have finished our work. No more does the Master have need of mortal messengers; he has risen from the dead. He told us before they arrested him that he would die and rise again on the third day. I have seen the tomb—it is empty. I have talked with Mary Magdalene and four other women, who have talked with Jesus. I now disband you, bid you farewell, and send you on your respective assignments, and the message which you shall bear to the believers is: `Jesus has risen from the dead; the tomb is empty.'"

190:1.6 The majority of those present endeavored to persuade David not to do this. But they could not influence him. They then sought to dissuade the messengers, but they would not heed the words of doubt. And so, shortly before ten o'clock this Sunday morning, these twenty-six runners went forth as the first heralds of the mighty truth-fact of the resurrected Jesus. And they started out on this mission as they had on so many others, in fulfillment of their oath to David Zebedee and to one another. These men had great confidence in David. They departed on this assignment without even tarrying to talk with those who had seen Jesus; they took David at his word. The majority of them believed what David had told them, and even those who somewhat doubted, carried the message just as certainly and just as swiftly.

190:1.7 The apostles, the spiritual corps of the kingdom, are this day assembled in the upper chamber, where they manifest fear and express doubts, while these laymen, representing the first attempt at the socialization of the Master's gospel of the brotherhood of man, under the orders of their fearless and efficient leader, go forth to proclaim the risen Savior of a world and a universe. And they engage in this eventful service ere his chosen representatives are willing to believe his word or to accept the evidence of eyewitnesses.

190:1.8 These twenty-six were dispatched to the home of Lazarus in Bethany and to all of the believer centers, from Beersheba in the south to Damascus and Sidon in the north; and from Philadelphia in the east to Alexandria in the west.

190:1.9 When David had taken leave of his brethren, he went over to the home of Joseph for his mother, and they then went out to Bethany to join the waiting family of Jesus. David abode there in Bethany with Martha and Mary until after they had disposed of their earthly possessions, and he accompanied them on their journey to join their brother, Lazarus, at Philadelphia.

190:1.10 In about one week from this time John Zebedee took Mary the mother of Jesus to his home in Bethsaida. James, Jesus' eldest brother, remained with his family in Jerusalem. Ruth remained at Bethany with Lazarus's sisters. The rest of Jesus' family returned to Galilee. David Zebedee left Bethany with Martha and Mary, for Philadelphia, early in June, the day after his marriage to Ruth, Jesus' youngest sister.