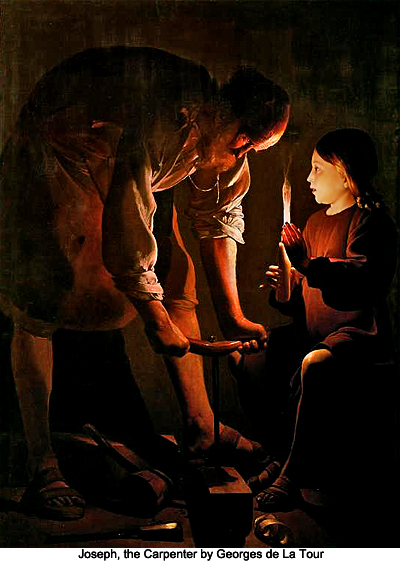 123:2.13 It was the custom of the Galilean Jews for the mother to bear the responsibility for a child's training until the fifth birthday, and then, if the child were a boy, to hold the father responsible for the lad's education from that time on. This year, therefore, Jesus entered upon the fifth stage of a Galilean Jewish child's career, and accordingly on August 21, 2 B.C., Mary formally turned him over to Joseph for further instruction.

123:2.14 Though Joseph was now assuming the direct responsibility for Jesus' intellectual and religious education, his mother still interested herself in his home training. She taught him to know and care for the vines and flowers growing about the garden walls which completely surrounded the home plot. She also provided on the roof of the house (the summer bedroom) shallow boxes of sand in which Jesus worked out maps and did much of his early practice at writing Aramaic, Greek, and later on, Hebrew, for in time he learned to read, write, and speak, fluently, all three languages.

123:2.15 Jesus appeared to be a well-nigh perfect child physically and continued to make normal progress mentally and emotionally. He experienced a mild digestive upset, his first minor illness, in the latter part of this, his fifth (calendar) year.

123:2.16 Though Joseph and Mary often talked about the future of their eldest child, had you been there, you would only have observed the growing up of a normal, healthy, carefree, but exceedingly inquisitive child of that time and place.