The Fish With A Shekel In It’s Mouth 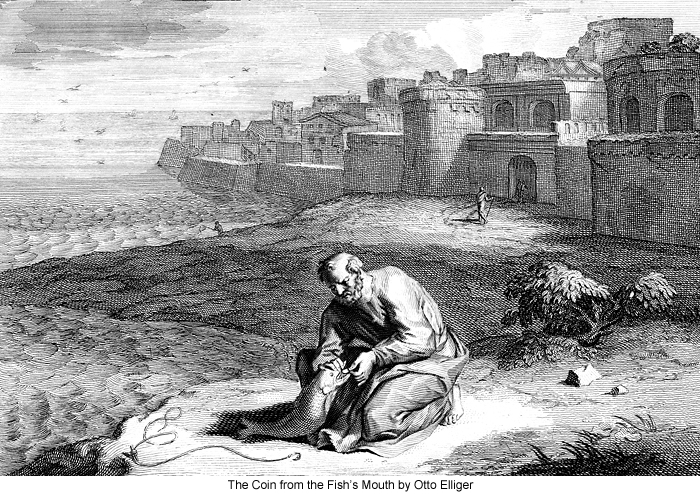 157:1.1 As Jesus, with Andrew and Peter, tarried by the lake near the boatshop, a temple-tax collector came upon them and, recognizing Jesus, called Peter to one side and said: "Does not your Master pay the temple tax?" Peter was inclined to show indignation at the suggestion that Jesus should be expected to contribute to the maintenance of the religious activities of his sworn enemies, but, noting a peculiar _expression on the face of the tax collector, he rightly surmised that it was the purpose to entrap them in the act of refusing to pay the customary half shekel for the support of the temple services at Jerusalem. Accordingly, Peter replied: "Why of course the Master pays the temple tax. You wait by the gate, and I will presently return with the tax."

157:1.2 Now Peter had spoken hastily. Judas carried their funds, and he was across the lake. Neither he, his brother, nor Jesus had brought along any money. And knowing that the Pharisees were looking for them, they could not well go to Bethsaida to obtain money. When Peter told Jesus about the collector and that he had promised him the money, Jesus said: "If you have promised, then should you pay. But wherewith will you redeem your promise? Will you again become a fisherman that you may honor your word? Nevertheless, Peter, it is well in the circumstances that we pay the tax. Let us give these men no occasion for offense at our attitude. We will wait here while you go with the boat and cast for the fish, and when you have sold them at yonder market, pay the collector for all three of us."

157:1.3 All of this had been overheard by the secret messenger of David who stood near by, and who then signaled to an associate, fishing near the shore, to come in quickly. When Peter made ready to go out in the boat for a catch, this messenger and his fisherman friend presented him with several large baskets of fish and assisted him in carrying them to the fish merchant near by, who purchased the catch, paying sufficient, with what was added by the messenger of David, to meet the temple tax for the three. The collector accepted the tax, forgoing the penalty for tardy payment because they had been for some time absent from Galilee.

157:1.4 It is not strange that you have a record of Peter's catching a fish with a shekel in its mouth. In those days there were current many stories about finding treasures in the mouths of fishes; such tales of near miracles were commonplace. So, as Peter left them to go toward the boat, Jesus remarked, half-humorously: "Strange that the sons of the king must pay tribute; usually it is the stranger who is taxed for the upkeep of the court, but it behooves us to afford no stumbling block for the authorities. Go hence! maybe you will catch the fish with the shekel in its mouth." Jesus having thus spoken, and Peter so soon appearing with the temple tax, it is not surprising that the episode became later expanded into a miracle as recorded by the writer of Matthew's Gospel.

157:1.5 Jesus, with Andrew and Peter, waited by the seashore until nearly sundown. Messengers brought them word that Mary's house was still under surveillance; therefore, when it grew dark, the three waiting men entered their boat and slowly rowed away toward the eastern shore of the Sea of Galilee.