The First "Bloodless" Passover With The Zebedees (Age 20) 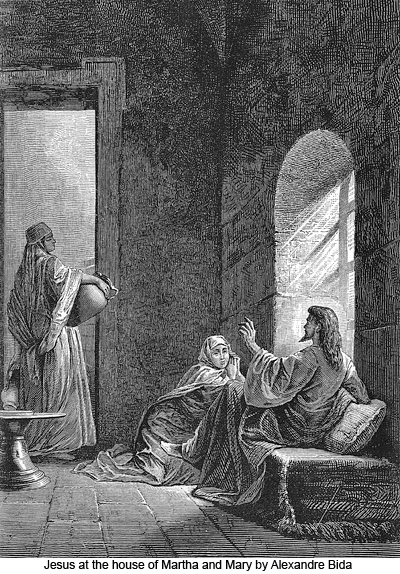 127:6.3 Although they could hardly afford it, Jesus had a strange longing to go up to Jerusalem for the Passover. His mother, knowing of his recent experience with Rebecca, wisely urged him to make the journey. He was not markedly conscious of it, but what he most wanted was an opportunity to talk with Lazarus and to visit with Martha and Mary. Next to his own family he loved these three most of all.

127:6.4 In making this trip to Jerusalem, he went by way of Megiddo, Antipatris, and Lydda, in part covering the same route traversed when he was brought back to Nazareth on the return from Egypt. He spent four days going up to the Passover and thought much about the past events which had transpired in and around Megiddo, the international battlefield of Palestine.

127:6.5 Jesus passed on through Jerusalem, only pausing to look upon the temple and the gathering throngs of visitors. He had a strange and increasing aversion to this Herod-built temple with its politically appointed priesthood. He wanted most of all to see Lazarus, Martha, and Mary. Lazarus was the same age as Jesus and now head of the house; by the time of this visit Lazarus's mother had also been laid to rest. Martha was a little over one year older than Jesus, while Mary was two years younger. And Jesus was the idolized ideal of all three of them.

127:6.6 On this visit occurred one of those periodic outbreaks of rebellion against tradition—the expression of resentment for those ceremonial practices which Jesus deemed misrepresentative of his Father in heaven. Not knowing Jesus was coming, Lazarus had arranged to celebrate the Passover with friends in an adjoining village down the Jericho road. Jesus now proposed that they celebrate the feast where they were, at Lazarus's house. "But," said Lazarus, "we have no paschal lamb." And then Jesus entered upon a prolonged and convincing dissertation to the effect that the Father in heaven was not truly concerned with such childlike and meaningless rituals. After solemn and fervent prayer they rose, and Jesus said: "Let the childlike and darkened minds of my people serve their God as Moses directed; it is better that they do, but let us who have seen the light of life no longer approach our Father by the darkness of death. Let us be free in the knowledge of the truth of our Father's eternal love."

127:6.7 That evening about twilight these four sat down and partook of the first Passover feast ever to be celebrated by devout Jew without the paschal lamb. The unleavened bread and the wine had been made ready for this Passover, and these emblems, which Jesus termed "the bread of life" and "the water of life," he served to his companions, and they ate in solemn conformity with the teachings just imparted. It was his custom to engage in this sacramental ritual whenever he paid subsequent visits to Bethany. When he returned home, he told all this to his mother. She was shocked at first but came gradually to see his viewpoint; nevertheless, she was greatly relieved when Jesus assured her that he did not intend to introduce this new idea of the Passover in their family. At home with the children he continued, year by year, to eat the Passover "according to the law of Moses."