The End Of Judas Iscariot 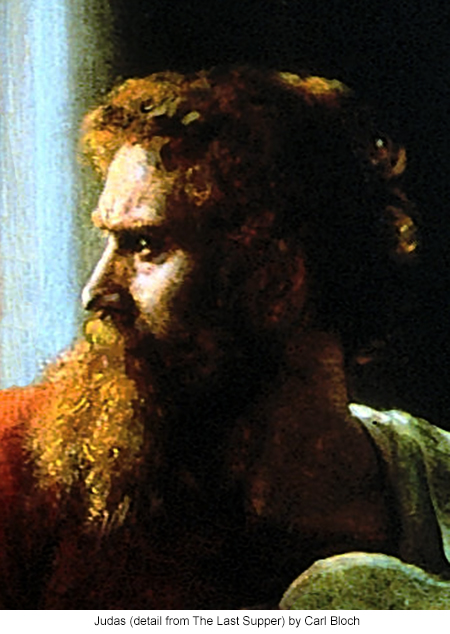 186:1.1 It was about half past eight o'clock this Friday morning when the hearing of Jesus before Pilate was ended and the Master was placed in the custody of the Roman soldiers who were to crucify him. As soon as the Romans took possession of Jesus, the captain of the Jewish guards marched with his men back to their temple headquarters. The chief priest and his Sanhedrist associates followed close behind the guards, going directly to their usual meeting place in the hall of hewn stone in the temple. Here they found many other members of the Sanhedrin waiting to learn what had been done with Jesus. As Caiaphas was engaged in making his report to the Sanhedrin regarding the trial and condemnation of Jesus, Judas appeared before them to claim his reward for the part he had played in his Master's arrest and sentence of death.

186:1.2 All of these Jews loathed Judas; they looked upon the betrayer with only feelings of utter contempt. Throughout the trial of Jesus before Caiaphas and during his appearance before Pilate, Judas was pricked in his conscience about his traitorous conduct. And he was also beginning to become somewhat disillusioned regarding the reward he was to receive as payment for his services as Jesus' betrayer. He did not like the coolness and aloofness of the Jewish authorities; nevertheless, he expected to be liberally rewarded for his cowardly conduct. He anticipated being called before the full meeting of the Sanhedrin and there hearing himself eulogized while they conferred upon him suitable honors in token of the great service which he flattered himself he had rendered his nation. Imagine, therefore, the great surprise of this egotistic traitor when a servant of the high priest, tapping him on the shoulder, called him just outside the hall and said: "Judas, I have been appointed to pay you for the betrayal of Jesus. Here is your reward." And thus speaking, the servant of Caiaphas handed Judas a bag containing thirty pieces of silver—the current price of a good, healthy slave. 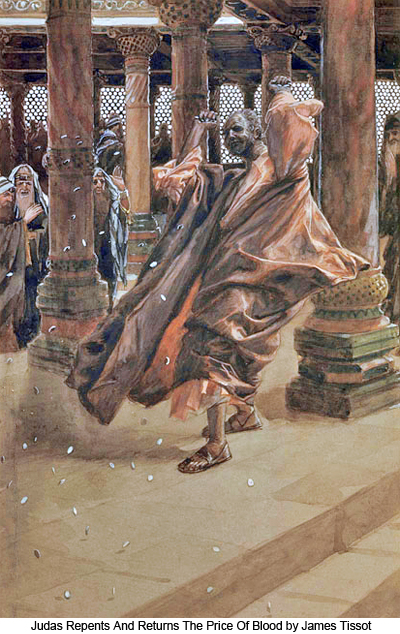 186:1.4 From a distance Judas saw them raise the cross piece with Jesus nailed thereon, and upon sight of this he rushed back to the temple and, forcing his way past the doorkeeper, found himself standing in the presence of the Sanhedrin, which was still in session. The betrayer was well-nigh breathless and highly distraught, but he managed to stammer out these words: "I have sinned in that I have betrayed innocent blood. You have insulted me. You have offered me as a reward for my service, money—the price of a slave. I repent that I have done this; here is your money. I want to escape the guilt of this deed."

186:1.5 When the rulers of the Jews heard Judas, they scoffed at him. One of them sitting near where Judas stood, motioned that he should leave the hall and said: "Your Master has already been put to death by the Romans, and as for your guilt, what is that to us? See you to that—and begone!" 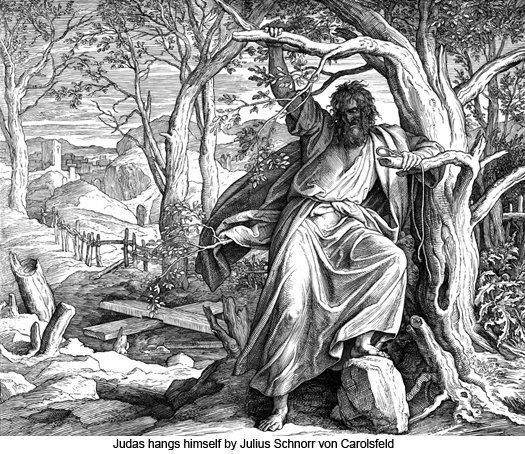