The Desire For Preference - The Apostles Argue 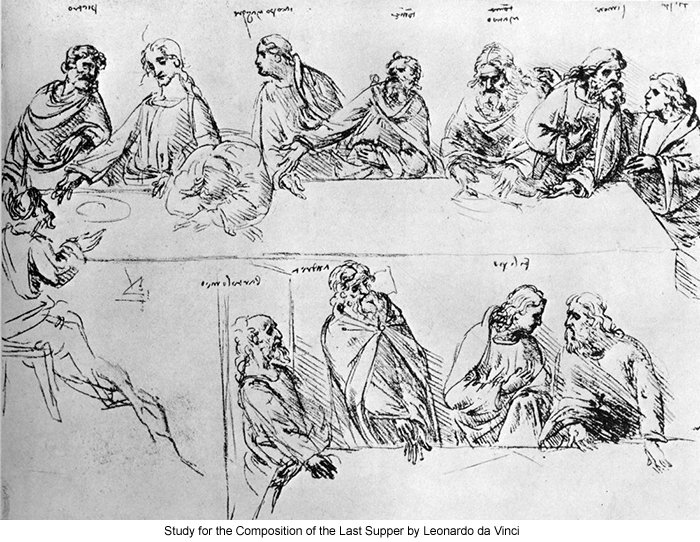 179:1.1 When the apostles had been shown upstairs by John Mark, they beheld a large and commodious chamber, which was completely furnished for the supper, and observed that the bread, wine, water, and herbs were all in readiness on one end of the table. Except for the end on which rested the bread and wine, this long table was surrounded by thirteen reclining couches, just such as would be provided for the celebration of the Passover in a well-to-do Jewish household.

179:1.2 As the twelve entered this upper chamber, they noticed, just inside the door, the pitchers of water, the basins, and towels for laving their dusty feet; and since no servant had been provided to render this service, the apostles began to look at one another as soon as John Mark had left them, and each began to think within himself, Who shall wash our feet? And each likewise thought that it would not be he who would thus seem to act as the servant of the others.

179:1.3 As they stood there, debating in their hearts, they surveyed the seating arrangement of the table, taking note of the higher divan of the host with one couch on the right and eleven arranged around the table on up to opposite this second seat of honor on the host's right.

179:1.4 They expected the Master to arrive any moment, but they were in a quandary as to whether they should seat themselves or await his coming and depend on him to assign them their places. While they hesitated, Judas stepped over to the seat of honor, at the left of the host, and signified that he intended there to recline as the preferred guest. This act of Judas immediately stirred up a heated dispute among the other apostles. Judas had no sooner seized the seat of honor than John Zebedee laid claim to the next preferred seat, the one on the right of the host. Simon Peter was so enraged at this assumption of choice positions by Judas and John that, as the other angry apostles looked on, he marched clear around the table and took his place on the lowest couch, the end of the seating order and just opposite to that chosen by John Zebedee. Since others had seized the high seats, Peter thought to choose the lowest, and he did this, not merely in protest against the unseemly pride of his brethren, but with the hope that Jesus, when he should come and see him in the place of least honor, would call him up to a higher one, thus displacing one who had presumed to honor himself.

179:1.5 With the highest and the lowest positions thus occupied, the rest of the apostles chose places, some near Judas and some near Peter, until all were located. They were seated about the U-shaped table on these reclining divans in the following order: on the right of the Master, John; on the left, Judas, Simon Zelotes, Matthew, James Zebedee, Andrew, the Alpheus twins, Philip, Nathaniel, Thomas, and Simon Peter.

179:1.6 They are gathered together to celebrate, at least in spirit, an institution which antedated even Moses and referred to the times when their fathers were slaves in Egypt. This supper is their last rendezvous with Jesus, and even in such a solemn setting, under the leadership of Judas the apostles are led once more to give way to their old predilection for honor, preference, and personal exaltation.

179:1.7 They were still engaged in voicing angry recriminations when the Master appeared in the doorway, where he hesitated a moment as a look of disappointment slowly crept over his face. Without comment he went to his place, and he did not disturb their seating arrangement.

179:1.8 They were now ready to begin the supper, except that their feet were still unwashed, and they were in anything but a pleasant frame of mind. When the Master arrived, they were still engaged in making uncomplimentary remarks about one another, to say nothing of the thoughts of some who had sufficient emotional control to refrain from publicly expressing their feelings.