The Birth Of Jesus 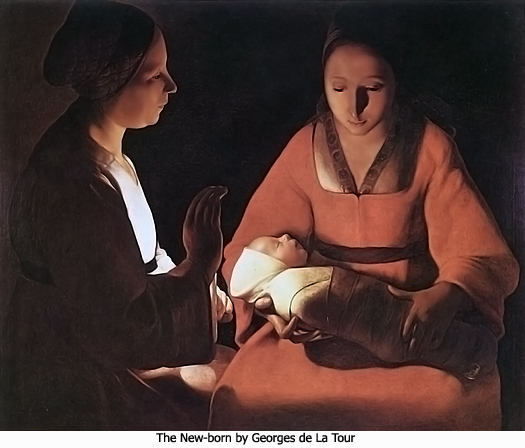 122:8.1 All that night Mary was restless so that neither of them slept much. By the break of day the pangs of childbirth were well in evidence, and at noon, August 21, 7 B.C., with the help and kind ministrations of women fellow travelers, Mary was delivered of a male child. Jesus of Nazareth was born into the world, was wrapped in the clothes which Mary had brought along for such a possible contingency, and laid in a near-by manger.

122:8.2 In just the same manner as all babies before that day and since have come into the world, the promised child was born; and on the eighth day, according to the Jewish practice, he was circumcised and formally named Joshua (Jesus).

122:8.3 The next day after the birth of Jesus, Joseph made his enrollment. Meeting a man they had talked with two nights previously at Jericho, Joseph was taken by him to a well-to-do friend who had a room at the inn, and who said he would gladly exchange quarter s with the Nazareth couple. That afternoon they moved up to the inn, where they lived for almost three weeks until they found lodgings in the home of a distant relative of Joseph.

122:8.4 The second day after the birth of Jesus, Mary sent word to Elizabeth that her child had come and received word in return inviting Joseph up to Jerusalem to talk over all their affairs with Zacharias. The following week Joseph went to Jerusalem to confer with Zacharias. Both Zacharias and Elizabeth had become possessed with the sincere conviction that Jesus was indeed to become the Jewish deliverer, the Messiah, and that their son John was to be his chief of aides, his right-hand man of destiny. And since Mary held these same ideas, it was not difficult to prevail upon Joseph to remain in Bethlehem, the City of David, so that Jesus might grow up to become the successor of David on the throne of all Israel. Accordingly, they remained in Bethlehem more than a year, Joseph meantime working some at his carpenter's trade.

122:8.6 These priests from Mesopotamia had been told sometime before by a strange religious teacher of their country that he had had a dream in which he was informed that "the light of life" was about to appear on earth as a babe and among the Jews. And thither went these three teachers looking for this "light of life." After many weeks of futile search in Jerusalem, they were about to return to Ur when Zacharias met them and disclosed his belief that Jesus was the object of their quest and sent them on to Bethlehem, where they found the babe and left their gifts with Mary, his earth mother. The babe was almost three weeks old at the time of their visit.

122:8.7 These wise men saw no star to guide them to Bethlehem. The beautiful legend of the star of Bethlehem originated in this way: Jesus was born August 21 at noon, 7 B.C. On May 29, 7 B.C., there occurred an extraordinary conjunction of Jupiter and Saturn in the constellation of Pisces. And it is a remarkable astronomic fact that similar conjunctions occurred on September 29 and December 5 of the same year. Upon the basis of these extraordinary but wholly natural events the well-meaning Zealots of the succeeding generation constructed the appealing legend of the star of Bethlehem and the adoring Magi led thereby to the manger, where they beheld and worshiped the newborn babe. Oriental and near-Oriental minds delight in fairy stories, and they are continually spinning such beautiful myths about the lives of their religious leaders and political heroes. In the absence of printing, when most human knowledge was passed by word of mouth from one generation to another, it was very easy for myths to become traditions and for traditions eventually to become accepted as facts.