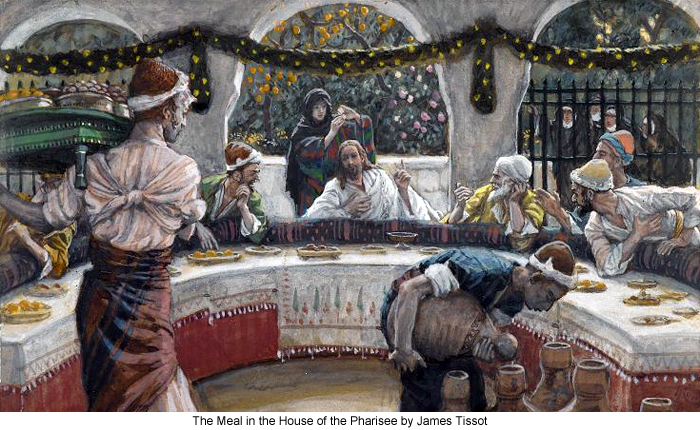 172:1.1 Pilgrims from outside of Judea, as well as the Jewish authorities, had all been asking: "What do you think? will Jesus come up to the feast?" Therefore, when the people heard that Jesus was at Bethany, they were glad, but the chief priests and Pharisees were somewhat perplexed. They were pleased to have him under their jurisdiction, but they were a trifle disconcerted by his boldness; they remembered that on his previous visit to Bethany, Lazarus had been raised from the dead, and Lazarus was becoming a big problem to the enemies of Jesus.

172:1.6 Jesus, knowing what they thought and hearing what they said, put his hand upon Mary's head as she knelt by his side and, with a kindly _expression upon his face, said: "Let her alone, every one of you. Why do you trouble her about this, seeing that she has done a good thing in her heart? To you who murmur and say that this ointment should have been sold and the money given to the poor, let me say that you have the poor always with you so that you may minister to them at any time it seems good to you; but I shall not always be with you; I go soon to my Father. This woman has long saved this ointment for my body at its burial, and now that it has seemed good to her to make this anointing in anticipation of my death, she shall not be denied such satisfaction. In the doing of this, Mary has reproved all of you in that by this act she evinces faith in what I have said about my death and ascension to my Father in heaven. This woman shall not be reproved for that which she has this night done; rather do I say to you that in the ages to come, wherever this gospel shall be preached throughout the whole world, what she has done will be spoken of in memory of her."

172:1.7 It was because of this rebuke, which he took as a personal reproof, that Judas Iscariot finally made up his mind to seek revenge for his hurt feelings. Many times had he entertained such ideas subconsciously, but now he dared to think such wicked thoughts in his open and conscious mind. And many others encouraged him in this attitude since the cost of this ointment was a sum equal to the earnings of one man for one year-enough to provide bread for five thousand persons. But Mary loved Jesus; she had provided this precious ointment with which to embalm his body in death, for she believed his words when he forewarned them that he must die, and it was not to be denied her if she changed her mind and chose to bestow this offering upon the Master while he yet lived.

172:1.9 When the chief priests heard of this dinner in Bethany for Jesus and Lazarus, they began to take counsel among themselves as to what should be done with Lazarus. And presently they decided that Lazarus must also die. They rightly concluded that it would be useless to put Jesus to death if they permitted Lazarus, whom he had raised from the dead, to live.