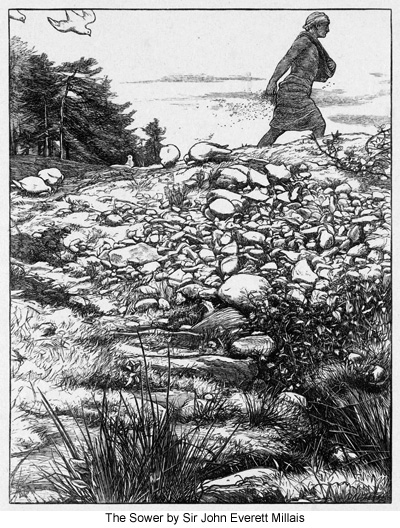 152:6.1 While resting at the home of a wealthy believer in the Gennesaret region, Jesus held informal conferences with the twelve every afternoon. The ambassadors of the kingdom were a serious, sober, and chastened group of disillusioned men. But even after all that had happened, and as subsequent events disclosed, these twelve men were not yet fully delivered from their inbred and long-cherished notions about the coming of the Jewish Messiah. Events of the preceding few weeks had moved too swiftly for these astonished fishermen to grasp their full significance. It requires time for men and women to effect radical and extensive changes in their basic and fundamental concepts of social conduct, philosophic attitudes, and religious convictions.

152:6.2 While Jesus and the twelve were resting at Gennesaret, the multitudes dispersed, some going to their homes, others going on up to Jerusalem for the Passover. In less than one month's time the enthusiastic and open followers of Jesus, who numbered more than fifty thousand in Galilee alone, shrank to less than five hundred. Jesus desired to give his apostles such an experience with the fickleness of popular acclaim that they would not be tempted to rely on such manifestations of transient religious hysteria after he should leave them alone in the work of the kingdom, but he was only partially successful in this effort.

152:6.3 The second night of their sojourn at Gennesaret the Master again told the apostles the parable of the sower and added these words: "You see, my children, the appeal to human feelings is transitory and utterly disappointing; the exclusive appeal to the intellect of man is likewise empty and barren; it is only by making your appeal to the spirit which lives within the human mind that you can hope to achieve lasting success and accomplish those marvelous transformations of human character that are presently shown in the abundant yielding of the genuine fruits of the spirit in the daily lives of all who are thus delivered from the darkness of doubt by the birth of the spirit into the light of faith—the kingdom of heaven."

152:6.4 Jesus taught the appeal to the emotions as the technique of arresting and focusing the intellectual attention. He designated the mind thus aroused and quickened as the gateway to the soul, where there resides that spiritual nature of man which must recognize truth and respond to the spiritual appeal of the gospel in order to afford the permanent results of true character transformations.

152:6.5 Jesus thus endeavored to prepare the apostles for the impending shock—the crisis in the public attitude toward him which was only a few days distant. He explained to the twelve that the religious rulers of Jerusalem would conspire with Herod Antipas to effect their destruction. The twelve began to realize more fully (though not finally) that Jesus was not going to sit on David's throne. They saw more fully that spiritual truth was not to be advanced by material wonders. They began to realize that the feeding of the five thousand and the popular movement to make Jesus king was the apex of the miracle-seeking, wonder-working expectance of the people and the height of Jesus' acclaim by the populace. They vaguely discerned and dimly foresaw the approaching times of spiritual sifting and cruel adversity. These twelve men were slowly awaking to the realization of the real nature of their task as ambassadors of the kingdom, and they began to gird themselves for the trying and testing ordeals of the last year of the Master's ministry on earth.

152:6.6 Before they left Gennesaret Jesus instructed them regarding the miraculous feeding of the five thousand, telling them just why he engaged in this extraordinary manifestation of creative power and also assuring them that he did not thus yield to his sympathy for the multitude until he had ascertained that it was "according to the Father's will."